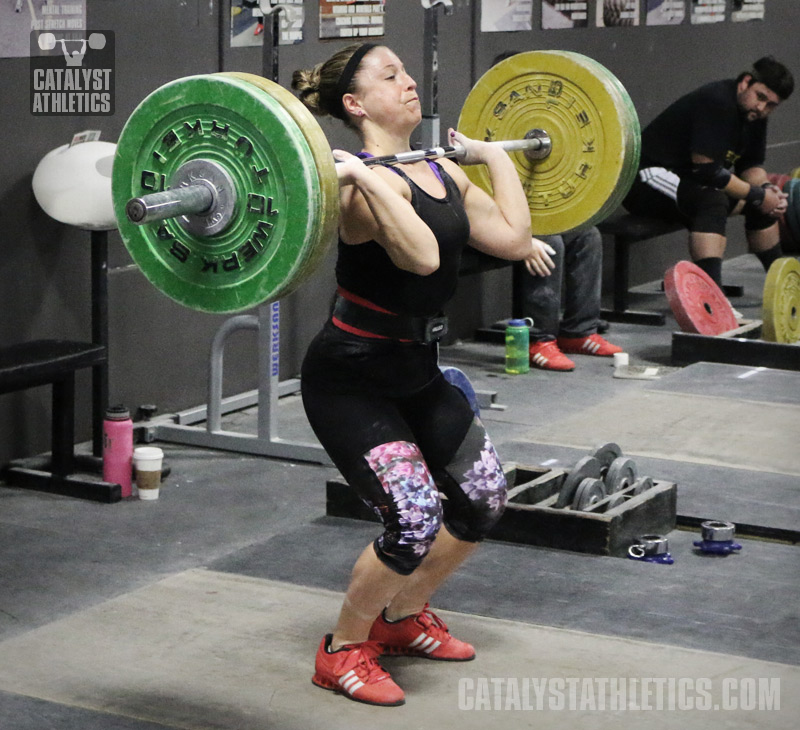 Droopy elbows in the jerk…it’s often a HUGE problem with beginners.
Let me describe what it is, although many of you probably already have the visual image in your head because you’ve seen it a lot. A lifter has the bar on his/her shoulders, preparing to jerk. The elbows are in an appropriate position and it all looks pretty stable and solid. During the dip phase, the elbows drop. Sometimes it’s a relatively minor drop, they just kinda sag down a little bit as the knees are bending. Other times, it’s a major problem where they plunge down really far and the bar actually sits on the sternum for an instant instead of the shoulders.
This ain’t good, brothers and sisters. It’s a problem that leads to a lot of failed jerks, and maybe even some shoulder pain. Some athletes can develop a little funky technique where their elbows drop and they still complete the jerks, but the problem still has to get fixed because you’ll never graduate up to really big weights with this kind of movement.
So let’s go through the problem-solving process. There are two questions we need to answer:
1)    What’s causing the problem?
2)    How do we fix it?
What’s causing the problem?
There’s no one single answer to this. Droopy elbows could be caused by a variety of things, including:
How do we fix it?
There are a lot of good weightlifting coaches out there, and you could find multiple ideas for how to solve the droopy elbow problem if you talked to them. I’ll give you a few of my personal favorites:
Let me explain the rationale for these two exercises. I’m a big believer in postural strength. When you think of “posture,” you think of the correct stand-up-nice-and-straight position we’re supposed to live with. Think of a soldier standing at attention when they hear a drill command like TEN HUT!… the back straightens and the chest goes up. This is a lot like the kind of position you want to maintain when you’re performing a jerk.
The exercises I described (Dip-pause-push press and Dip-pause-hold) are basically forcing the athlete to practice holding the correct posture. When I have athletes do sets of five in the Dip-pause-hold exercise with their maximum jerk weight, they often tell me afterwards that their core (torso) feels trashed. That’s good, because the exercise is supposed to develop ALL of the muscles that stabilize the body during heavy jerks. Their POSTURE is being strengthened. In my experience, you can get some good results with these little tricks.
Note #1: As always, other coaches might use these same exercises and refer to them by different names. Weightlifting is like that. Some coaches will call something a “Dip-pause-hold” and other coaches will call it a “Hungarian Belly Slammer” or whatever. Some of the more annoying coaches in the sport will act like their particular name is the handed-down-from-Jesus official one.  Whatever. The names I use for them are simply…the names I use.
Note #2: As I mentioned before, these are just a couple of suggestions to fix the droopy elbow problem. Other coaches will have additional ideas, and many of them are really useful. My thoughts aren’t the ONLY thoughts. They’re merely part of a wide range of possible fixes.
Feel free to give them a try. If they work, please send me a cashier’s check for $500. Don’t try to screw me over. I’ll get my lawyer and he’ll sue your ass off.

Celeste
Matt, I'd gladly give you $500 if my droopy elbows from hell disappeared.

But really -- breaking the technique down is really helpful. I think running through a mental checklist of the standards (inhale, weight through heels, etc.) will be beneficial.

Celeste
Someone get that girl a proofreader...
Jeff
Great article and I love the breakdown into the problem & solution, along with the sub-points related to each. Out of curiosity, is there a similar article related to the clean? I've had an issue with one of my athletes at my CrossFit box who keeps hitting her sternum on her cleans and I suspect it's also related to droopy elbows but would be quite interested to hear your thoughts as to whether it could be attributed to another fault, as well as potential fixes. Thanks!
Greg Everett
Jeff -

Jeff
Thank you, Greg! That article was very helpful and included some great drills. In particular, it sounds like the 'scarecrow clean' would be an excellent drill to start with to ensure my athlete is getting the barbell properly placed on the front rack position without hitting her sternum. The subsequent movements you listed in the article seem like an ideal progression once the athlete understands where the barbell should land. Thanks again!
Tony L
Matt
Great article as always. I really get a ton from your articles, as well as your book based on some past articles. I also live in Phoenix. Do you have anywhere in AZ that you teach weightlifting classes or give seminars? With your experience in both lifting and coaching I would be eager to attend. Thanks.
Lizzi
I tried these drills today (actually went to 150% of my Jerk PR in the dip-pause-hold) and elbows in Jerk work afterwards were better. Hoping that this will continue to the next workout.. Love these articles and the breakdown of the techniques.