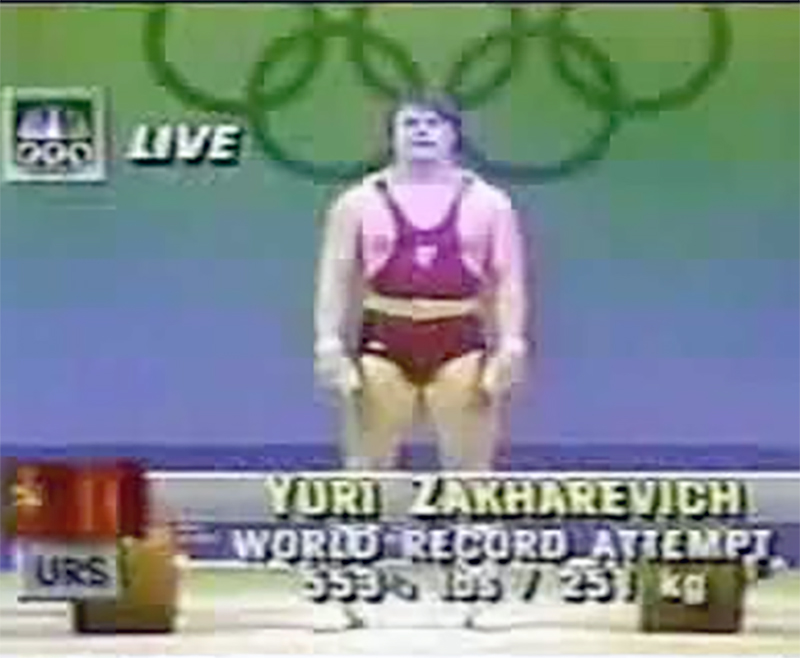 How many of you have heard of an old Soviet weightlifter named Yuri Zakharevich? Probably not many, I’m guessing. He’s one of the greatest in history, but his prime was in the 80s. So he’s before your time, unless you happen to be a veteran or lifting historian.

You newbies have never seen anything like Yuri. He lifted like he was sent here from another galaxy. It’s still almost incomprehensible how good this dude was. On March 4th,1983, he snatched 200 kg (440 lbs) and clean and jerked 240 kg (529 lbs) at 100 kg bodyweight (220 lbs). He had just turned 20 years old at the time, so he was still a junior. It was at a meet in Odessa, Ukraine (I think it was the Friendship Cup).

I want you to stop and think for a second about a guy doing a 440 lb snatch and 529 lb C&J at 220 lbs bodyweight…and 20 years old. Nobody had ever seen anything like this. I’ve watched the video of it many times. All the old suits in the front row of the audience were shaking their heads with their mouths open. He absolutely eclipsed all the world records, junior and senior. He also kicked the crap out of Victor Sots, who was one of the best lifters in the world in those days. The whole sport was basically in shock.

Needless to say, the future was ripe pickings for Yuri at this time. He was poised to win two or three Olympic titles and as many world championships as he wanted. Then it all fell apart, big time.

Later that same year (1983), Yuri dislocated his elbow attempting another world record. And I mean he really tore the piss out of that thing. The damage was so extensive that the doctors had to rebuild his elbow with synthetic tendons. Keep in mind, this was 1983 technology. That means they probably used tire rubber or something. It was the kind of injury that turned his whole career into a big question mark.

That’s right. He broke the world record on his second attempt, and then jumped five more kilos and broke it again. He also did a 245 kg C&J (540 lbs) that day to win the gold medal and set a world record in the total of 455 kg (1,002 lbs). Much like his 1983 performance, he annihilated everything in his path. Olympic gold medal. Comeback completed. Place in history solidified.

Think about the balls it must have taken to jump under a 462 lb snatch after suffering the kind of injury he had five years earlier. Big injuries obviously mess up your body, but they also screw with your mind. I can verify that personally. This guy not only came back from it…he came back and attacked weights that were substantially bigger than the ones that had broken him. I love his story because it shows such an uncommon level of courage.

I’m going to give you some of Yuri’s own words. A few years after he retired, he did an interview with World Weightlifting magazine. They asked him about his 1983 injury, and how it affected him mentally. Here’s what he said:

“First I thought, ‘Hell, that’s the end of the world.’ Today, in retrospect, I can see it was one of the major turning points in my career. It made me realize that there is a time in every one’s life when you must clench your teeth together and your fate only depends on your determination. Finally, I overcame the injury, because I wanted to lift again so much. And later on I achieved even better results than before. It was a great thing.” - Yuri Zakharevich

I took the magazine page with those words on it, cut it out, and hung it on my wall. I’ve been looking at it for over twenty years. Now, I’m passing it along to you.

Sometimes in our lives, we get bad news. Know what I mean? People say things to us like, “You have a torn rotator cuff” or “Three of the discs in your back are herniated.” You get a cold sensation in your stomach when you hear these things. It feels like you’re gonna throw up or piss your pants.

And that particular kind of bad news is nothing compared to some of the other bombs that get dropped on us. Things like…
“Your job with this company is no longer available, so we’re going to have to let you go.”
“I want a divorce.”
“We found a tumor near your brain.”

These are the things that make a sports injury look like a slice of blueberry cobbler. They’re literally the worst pieces of news you can hear in your life.

It’s incredibly helpful when we have good people around us to help with this stuff. Family, friends, great doctors, great coaches, etc. Big support systems are a tremendous blessing.

But at the end of the day, we all have to handle it on our own. Yuri was a world champion in the old Soviet system, so he had the finest assistance available as he made his comeback from the elbow dislocation. Still, he eventually found himself standing alone on the Olympic platform with a 462 lb barbell. At that point, the support staff had done all they could. His family had given him all the help they had to give. His coaches had prepared him for the big moment.

Then it became a matter of personal responsibility, willpower, and decisions. He made a decision to clench his teeth together, overcome, and achieve better results than before.

If he could do it, we can all do it. We just have to make the same decisions he made.

Geoffrey Hegedus
Got some old video footage of him lifting; it truly is inspiring
Alan
Hi Matt,

I just been through a surgery to remove my apendix, i love to lift so much and i really want to get back and lift again. I need to wait around a month or 2 to start lifting again but with a smaller weights. Your article helps me a lot and realize that this time im goint to be out of the platform , i will return to do the things better that i was doing before. Thanks for the good reading. Best from Mexico.

Rashmi khelmart
It is truly inspiring story for the people that don't face trouble....
Duke
Thanks again, Matt. I learned a couple of months ago that I have a torn rotator cuff and torn labrum. But those injuries look like a slice of blueberry cobbler at the moment. My teeth are clenched. This article is taped to my wall. I look forward to the day that I can say: "It was a great thing."
Brandon
I'm not a great lifter by any standard, but I try hard. After 4 deployments my body is pretty broken down, herniated discs, torn ligaments, etc. This guys story is inspiring to me, I'll never come anywhere close to his numbers, but I won't let injuries stop me either. Great read.
Robert Roth
I believe Yuri also cleaned 250.5 kg at the '99 Olympics, missing the jerk. He darn near matched the Supers competing as a heavyweight!
David
for those that want to see those amazing lifts:
https://www.youtube.com/watch?v=89SeN4Jo_4s