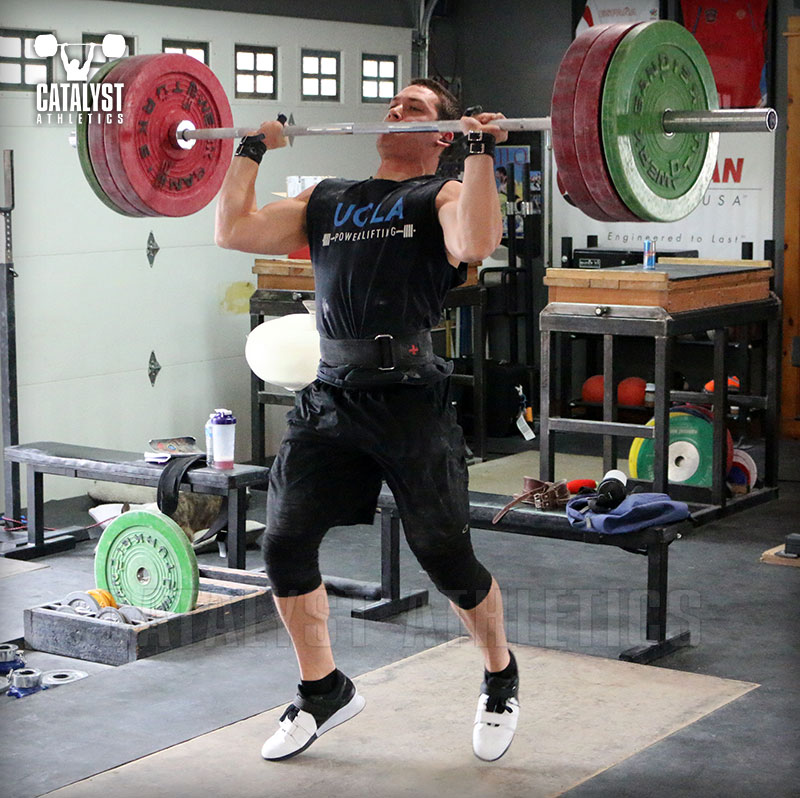 The order of exercises is an important element of the training session prescription, as it will influence both the effect of the exercises as well as the performance of each exercise in the session. The basic structure is to order exercises in descending degree of technical complexity and speed. That is, exercises that are faster and more complex (e.g. the competition lifts and their variations) will be performed first, and exercises that are less technically demanding and more strength-oriented (e.g. squats) will be performed last. Exercises like pulls, which are only moderately technical and speed-oriented will be performed in between. This ensures that the lifter’s physical and mental resources are adequately available as needed. In the basic circumstances, if a lifter were performing snatches, snatch pulls and back squats, they should be performed in the order listed.

Order can diverge from this protocol to achieve certain objectives, however, such as when the necessary extent of prioritization of a certain exercise warrants overriding the normal order. If a lifter is emphasizing squat strength as much as possible during a preparation mesocycle, for instance, squats may be performed as the first exercise in the workout. This ensures the lifter performs the most important exercise of the session when he or she is freshest physically and mentally. This will mean subsequent exercises may not be performed optimally, but if the prioritization is warranted, this should not be a concern.

In other cases, such changes in order may be done to achieve a specific effect. Squatting before snatching, to continue with the example, may also be used occasionally to force the lifter to be more aggressive in the snatch due to being fatigued, and may, like jumping after squatting, force the body to recruit more and higher threshold motor units, and to improve rate coding and synchronization to achieve the necessary force, speed and explosiveness in a state of fatigue.

Or, high intensity and very low rep (maximal stimulation of force production with minimal fatigue) squatting before snatching can improve the contraction force during the snatch. These kinds of changes should be used with experienced lifters, as they have the potential to interfere with optimal motor pattern development in lifters without established technical proficiency due to the potential changes in the motion of technical lifts performed in a more fatigued state.

Certain exercises may be ordered differently depending on their relative priority as well. For example, if a lifter is performing snatches, snatch pulls, snatch push presses and back squats in a workout, the order of the last two can be changed depending on the needs of the lifter. Generally the snatch push press would be best performed prior to the squat because of its greater need for precision, and because the leg drive for the push press will be reduced in power by the fatigue of preceding squats; however, if a lifter is strong overhead but relatively lacking in squat strength, it makes sense to perform the squats before the push presses. Another common example would be performing squats before rather than after pulls for a lifter whose squat strength lags considerably behind his or her pulling strength. While pulls are certainly more technical and speed-oriented than squats, they’re not dramatically so, and the benefits of reversing the order for a lifter who needs it outweighs the drawbacks. In a session in which pulls are not particularly heavy, such reordering is unnecessary.

Exercises with similar movement patterns should generally be performed in series. Generally a single training session should not combine lift variations of both snatch and clean due to the subtle differences in the rhythms and motions, so this ordering will naturally occur in most cases already due to the basic rules of order. For example, it’s ideal to perform snatch pulls after snatches because of the similarity of the two movements rather than inserting another exercise in between.

A final consideration is how the order of exercises affects the timing and flow of a training session. When possible without interfering with more important criteria, exercises should be ordered to improve the efficiency of the session. For example, the transition time between snatches and snatch pulls is virtually none—simply the likely addition of weight and the donning of straps. If instead a lifter performs snatches, then overhead squats, and then snatch pulls, there is now the additional time of breaking the bar down, setting up the squat rack, reloading the bar, and then repeating that work in reverse to prepare for the pulls. If the overhead squats are instead performed after pulls, the change in the setup only needs to take place once rather than twice, saving considerable time. While it may seem like a minor detail, in a training session with 3-6 major exercises and additional work like trunk strength training, bodybuilding and mobility, such fractions of time add up quickly. Additionally, the grouping of similar movements improves the development of motor patterns for the related competition lift.