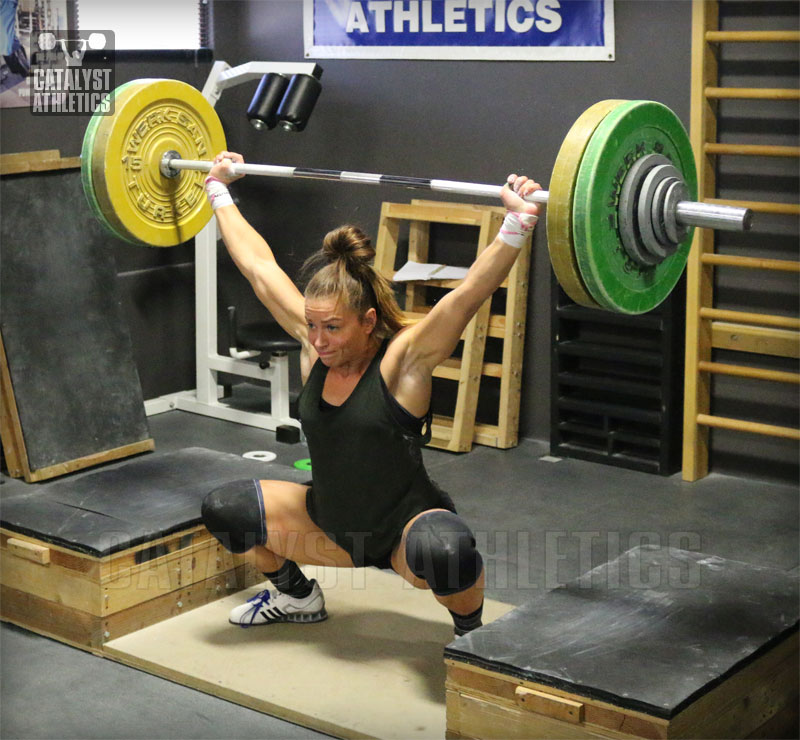 There are approximately infinity ways to write weightlifting training programs. Some coaches stick with the same basic approach at all times adjusted to different skill and experience levels; others change drastically among their lifters even at the same skill and experience level. But one of the basic elements of all approaches is whether or not to prescribe intensity (i.e. percentages or actual weights) for a given lifter. I believe there are times and situations when both are appropriate, even within the same workout.


Why Not to Prescribe

The first situation in which prescribed intensities are inappropriate is with very new lifters for two simple reasons. First, such lifters either don’t have 1RMs on which to base relative intensity prescriptions, or the 1RMs they have are not accurate. The latter can be for a combination of several factors, such as limited technical ability, limited mobility, poor neurological efficiency, and underdeveloped will. Second, very new lifters progress rapidly, and even if a particular 1RM was accurate at the start of a training cycle, it will very likely become inaccurate in short order. All in all, prescribed intensity with beginners will usually hold them back more than help them progress.

The next situation is in a program in which the coach wants the lifter to essentially train as heavy as possible on any given day. This may mean working to a single maximal or near-maximal set (possibility with subsequent back-off sets), or hitting a prescribed number of sets at what is found to be the maximal weight manageable for those sets that day. The coach may be able to predict what will be possible for an athlete he or she is very familiar with, but it’s generally much easier and logical to simply go by feel that day with the coach’s supervision and guidance.

A third situation is for specific exercises for which 1RMs don’t currently exist, for which 1RMs are not possible or advisable, for which 1RMs have not been tested recently and are consequently assumed to be inaccurate, or with which the coach prefers the lifter to perform with a particular degree of effort or speed that requires the intensity to be determined by feel and appearance each day.

Finally, certain exercises are often best left to be felt out day to day with an idea of progression provided to the lifter beforehand, e.g. the weights should increase over the course of 3 weeks, it should be taken to max each time, etc. Exercises like presses, good mornings, stiff-legged deadlifts, etc. often fall into this category.

The primary reason for prescribing intensities is to control lifters’ progress. This doesn’t mean intentionally holding the lifter back as that sentence may make it sound, but rather trying to ensure maximal progress in the time period in question by preventing the lifter from overextending and setting him- or herself back, or from not working hard enough and consequently not improving as much as possible. Many lifters are not in tune enough with their own bodies and don’t understand how training affects them in the long term to be capable of making appropriate decisions with regard to loading day to day. This spans the range from those who will coast with minimal effort unless pushed, to those who will nearly kill themselves unless reigned in.

Prescription is also helpful in ensuring optimal performance on a certain date, such as for a competition. It’s frustratingly common to see lifters perform far better in the gym on random days than they do in following competitions. There are a number of reasons this will always or nearly always occur with certain lifters, but as much as possible, the lifter and coach should be attempting to time the best performance with the most important competition date. This doesn’t necessarily require prescribed intensities, but it certainly requires a rational plan overall, of which prescribed intensities are often a part.

Another important reason, which is becoming more and more prevalent these days with all of the remote coaching occurring online, is to guide and control a lifter whom the coach is not working with live every day. If the coach can watch a lifter and control weights in real time, he or she has to provide the lifter with some kind of guidance. Of course in some cases, this may be just to take a lift to a maximal attempt with back-offs prescribed at specific percentages of that max, but otherwise, there needs to be weights or relative intensities to give the lifter a plan to follow.

This is exactly why most of the programs I post on the website have intensity prescriptions. There are a few that don’t, but in those cases, instead there are explicit instructions on how to determine intensity, such as to work to a maximal set, to find a challenging weight that allows proper execution, or in some cases even to find a weight that’s easy that day.

The problem in these cases, of course, is that I have only a very general idea about who’s doing these programs—I do get feedback from a lot of people, and my finely-tuned sense of reason tells me a lot about who they are, but ultimately I’m writing a program for a fictional person about whom I have to assume many things such as technical proficiency, strength, age, etc. This is why I try to make it clear in various places that weights will likely need to be adjusted somewhat during the course of these programs. I would prefer in many cases not to prescribe objective intensities, but it’s generally my best option. Of course, in any program where I don’t provide objective intensities for whatever reason, even if I do provide guidance on determining weights, we’re bombarded with questions about what weights to use.


Following the Spirit of the Program if not the Letter

While all programs are intended to be as accurate as possible, no coach will be able to perfectly predict a lifter’s state on any given day in the future. Factors in and out of the gym can affect a lifter’s response to training dramatically and unexpectedly, and create situations in which prescriptions for a given training session are anything from inappropriately difficult for that day to physically impossible; in some cases, a prescription may even prove too easy.

In any event, the coach must always be willing and able to make adjustments to the training program as it progresses. Strict, unwavering adherence to prescriptions can transform a slightly imperfect program into a complete failure. With relatively minor adjustments as needed day to day and week to week, the spirit and basic structure of the program can be preserved and the effectiveness maximized.

This fairly predictable need for minor adjustment, of course, is the rationale behind not finalizing the details of prescription of an entire macrocycle upfront, but instead creating only the necessary details of the macrocycle and mesocycles, and then filling in the details of the microcycles as they arrive with the accumulated training data from the cycle in hand. This spares the coach the headache of more changes than necessary, and can save considerable time.

Ultimately, in most cases I believe the best course of action is to prescribe intensities and then be ready to adjust as needed in each workout based on how the lifter looks and feels. This provides a clear plan for the duration of a training cycle, keeping the lifter on track and progressing, but also provides for the adjustments that are typically necessary to ensure maximal progression.

This can mean very minor changes, or in some instances, dramatic changes—even to the extent of stopping an exercise completely or skipping an entire workout. This is where experience as a coach becomes extremely important—knowing when and how to make adjustments that preserve the purpose of a given workout or exercise when things are not working as planned. In other words, always following the spirit of the program if not the letter.