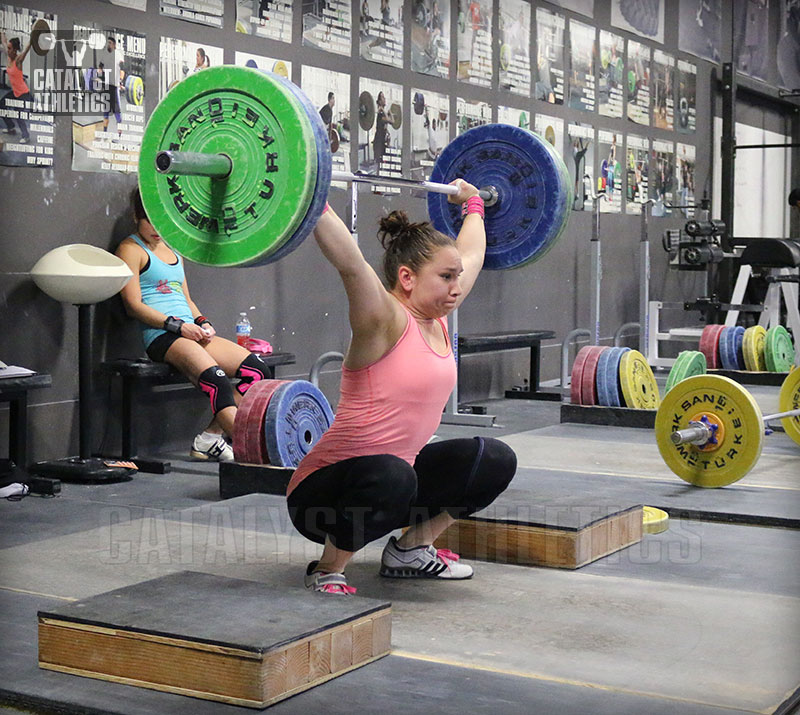 I think one of the biggest mistakes made in US weightlifting (well... on the Internet by Americans) is an excessive focus on the misguided idea that there are amazing secrets of lift technique we're not aware of that play a dramatic role in the performance disparity between American lifters and their European and Asian counterparts.

I humbly submit that this is untrue, and that the only significant difference with regard to technique between the two groups collectively is that one learns at younger ages during optimal times for motor learning and the development of speed, explosiveness and mobility, and then has more time to develop proficiency, individual optimization and consistency; and the other learns at later ages with inadequate foundations, suboptimal physical (i.e. physiological, neurological and anatomical) conditions, and then has far less time to develop mastery by the time of the natural biological and competitive peak.

Add to this the fact that dominant countries like Russia and China are able to cull large numbers of available lifters to reduce their competitors to the absolute best suited, physically and mentally, for the sport, without competition for athletes from professional sports with collegiate scholarship opportunies (e.g. football, baseball, gymnastics, etc.), while US lifters arrive in the sport largely by chance, often because they’re not successful in or have aged out of other sports, and have to be virtually begged to remain in the sport long term, and it shouldn't be surprising that our foreign counterparts demonstrate typically more refined and consistent technique.

While we stumble around aimlessly searching for this imaginary secret, and spend inordinate amounts of time and energy arguing with each other about it like children, the elements that truly matter like the development of lifters from the proper young age with appropriately timed and implemented methodology, in a system that focuses on long term athlete development, supported by cultural and financial interest, are largely ignored as if they're entirely incidental.

Even something as simple and obvious as the fact that a lifter who begins training 5-8 years earlier than another will have a considerably higher strength base when the two are the same age seems to be forgotten. Higher levels of strength and explosive-strength will mean that technical consistency is maintained longer as weights increase.

Add to all of this the elephant in the room of drug use. I think it's fair to say that the more than 20 positive tests of lifters at the 2015 world championships (along with the fact that some of the world’s top competitors have tested positive as juniors), despite what some people want you to believe, and what others naively want to believe themselves, lends a great deal more support to the notion that this is a significant and genuine factor in performance disparities.

You can believe anything you want about the ethics of the drug issue, but this has no bearing on whether or not drug use is prevalent, or if it provides a significant training and performance advantage. The former is known to anyone who's been around the sport for a while, and should be clear to those newer in light of last year's worlds; the latter should be obvious with even momentary consideration—if drugs didn't confer a significant advantage, lifters wouldn't risk sanctions and even lifetime bans to use them. And spare me the argument that you still have to work hard even if you’re on drugs or any of the other nonsense that always attends this topic—it’s all completely immaterial to this point.

Back to technique directly—with more and more elite European and Asian lifters and coaches taking advantage of the opportunities provided by the Internet and Americans' disposable income, we're seeing over and over again that these lifters and coaches are not teaching or doing anything considerably different in terms of the technical execution of the lifts than the top coaches and lifters in the US. Further, it often becomes clear that many of these top lifters don’t genuinely understand what they’re doing or how they’re doing it because of what I mentioned previously about their learning at the appropriate young age, which is done through drilling and refining, not through the conceptual education we see in the US so much due to the older age of the majority of the weightlifting population and our obsession with data. (To be fair, many elite athletes can’t coach or teach well because their mastery of the movements was the result primarily of natural ability rather than studied development, and they consequently lack the knowledge to teach—this is not unique to European, Asian or any other country's lifters, or to the sport of weightlifting by any means.)

The situation reminds me of my wife’s refusal to take lifting advice from me strictly because of the nature of our relationship. She’ll hear something from someone else and suddenly believe it despite my having said the same thing to her for five years. Similarly, a lot of American coaches are ignored despite saying and doing the same things that these newly vocal foreign lifters and coaches are saying and doing; unfortunately, they’re not Chinese or Russian enough to have any credibility anymore. I’ve seen the opinions of successful American coaches replaced with the opinion of someone who is nothing more than a recreational lifter who happens to reside in a country with a dominant weightlifting program, as if residency and nationality alone confer some innate ability and knowledge.

Now don't, in a fit of the classic online brand of indignation, misinterpret this to mean I'm claiming American coaches all know everything about technique and can't learn anything new from any European or Asian coaches. Nor is this a criticism of European and Asian lifters and coaches. Those would be enormous, but predictable and inevitable, failures to comprehend the preceding. The point is simple, and was explained at the beginning of this article: technical secrets are not the source of the US’s relatively poor performance in weightlifting.

Stefan
Good article!
Another thing... when on drugs you can train more often hence work even harder on your technique at weights and volumes that would be impossible if you were clean.
Jake Rowell
If it's not an issue of technical mastery of our coaches, but a better feeder system for getting more talented athletes involved at a young age, is there a conceivable path of incremental progress toward that goal?

Do you feel that more coaches out there like Ray Jones will lead to more youth and junior athletes? Are the huge numbers of athletes at youth nationals an indicator that things are moving in the right direction? Maybe the kids of all of those getting involved in their 20's and 30's at record numbers now will be a part of a better future for weightlifting in the US.
Yes, it's heading in the right direction with more youth lifters getting involved. However, I think in most cases the development process is not optimal and these kids will either not last in the sport or not reach their true potential. I do think that the US will never have a formalized or centralized system in the same vein as China, for example, which makes things tougher, but I also don't think it's totally necessary. If opportunities are there first for exposure at young ages (improving), then opportunities to get involved (improving, but way behind) and finally opportunities to remain in the sport without completely sacrificing a future (not really existent yet), then we'll start being able to develop international elite lifters on a regular basis rather than getting lucky with one or two phenoms here and there who still never quite make it to the top.

I hope you're right and I believe you are right to some degree. I primarily coach youth lifters through my own private gym. Although I live in a small town (and that does make difference) I also work within the school PE and athletic system here so I have constant contact with all the students elementary through high school. I try to "recruit" children who I believe will enjoy weightlifting and have a competitive future. BUT I constantly am in the scenario of "I can't make training today or competition this week because of football, basketball, track, tennis, rodeo, stock show (I live in Texas) practice/game/tournament". In America those are still first with our kids. When summer comes around I think I'll have more time with them but then each kids goes to about 3-4 camps (not an exaggeration) every summer. Yes, I have a few that are only weightlifters, but these are the less athletic kids (hence not in school sports).

So, I am still running into the scenario of:

-Spotty training that can't be too heavy because I'm doubling or tripling training with other sports
-Not competing enough in weightlifting for it to feel rewarding to the kid.
-Multi-sport kids that graduate with injuries received from sports that then think they want to lift for one summer before they go to college.

Also, I'm not trying to take kids away from their school sports and specialize them in weightlifting. I'm actually trying to help them in their respective sports but it's just the nature of the beast that those sports come first to most (and usually your best) athletes. So, I believe we will find some more CJ Cummings in the future just still not at the rate of China.

I have shot around the idea in my head of creating a weightlifting "season" in which I could collaborate with other gyms in the region to have a meet once a month for about 4 months. On top of increasing the amount of competitions so there is more of a payoff vs. the amount of training, you could have some kind of team championship for the kids so they are not only trying to reach a qualifying total but have a team victory. Since kids are always growing and can recover it shouldn't be a problem for them to compete every month. Still once a month competition pales in comparison to weekly or more games of basketball, baseball, and soccer. You have to understand kids want to play games and parents want their money's worth when they sign-up a kid for something. So, until weightlifting develops a fun continually competitive program like the other sports we probably won't have as strong of a system as your power house international competition. I feel I've typed way to much.