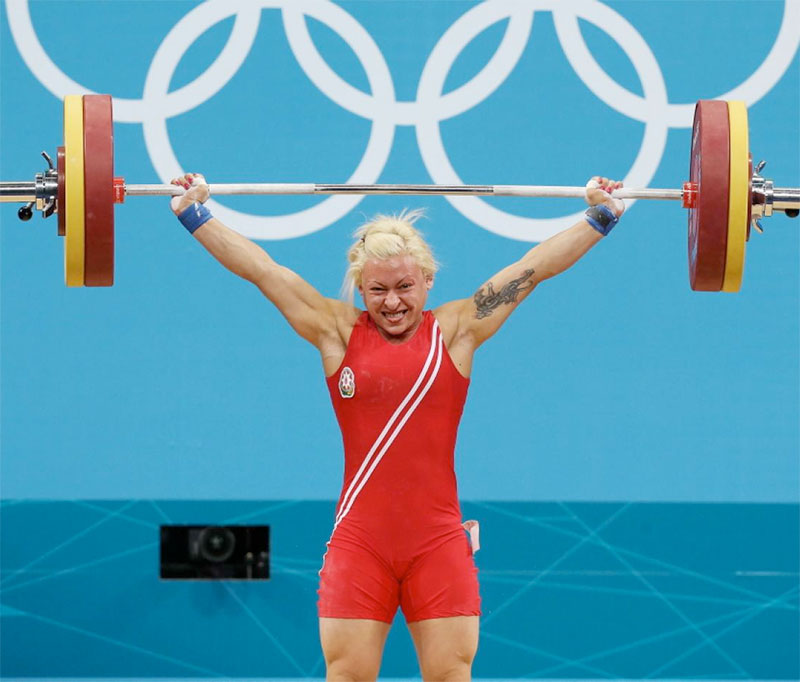 Now that the entire sport of Olympic weightlifting is dogpaddling through the wake of the 2016 IWF Drug Suspension Festival, we’ve all got enough drama and hysteria to keep us in a tizzy for a very long time.

NOTE: For the six or seven of you who don’t know what I’m talking about, the International Weightlifting Federation recently suspended several of the biggest stars in the sport because their urine samples from the 2008 and 2012 Olympics were re-tested with current, more effective drug testing technology. These lifters passed their tests in ’08 and ’12, but now they’ve been retested, popped, and kicked out of the sport. That means they’re out of the Rio Olympics, unless some kind of legal action happens in the coming months that overturns their suspensions. That might happen, but for now, these lifters are suspended from competing in weightlifting (several Olympic gold medalists, including Ilya Ilin, are in this pack).

However… everybody is a little worried, regardless of which side of the drug issue they fall on. We’re worried about the entire sport of weightlifting getting kicked out of the Olympic Games. Is the International Olympic Committee finally going to get fed up with all the nasty drug scandals that come from weightlifting? We know the image of the Olympics is massively important to the IOC, and steroid controversies are the public relations equivalent of somebody taking a dump on the living room floor during a dinner party. The powers-that-be don’t like it when the sacred Olympic Games gets made to look like a drug circus, and weightlifting is one of the sports that does that exact thing fairly often.

Let me describe it by sticking with the dinner party analogy I started. Imagine the Olympics is a dinner party, and all the guests at the party represent different sports. Got it? Some of the guests at the party have oodles of money and fame (basketball, figure skating, etc.), so they stroll around with an air of superiority and security. They sip brandy from diamond-studded snifters (with their pinky fingers sticking straight out), knowing they’re the stars of the show with their sexy clothes and perfect tans. Weightlifting is like the obnoxious guest who eats off other people’s plates without permission, gets drunk, rips farts at the table, and eventually staggers up to the rich guests with disheveled hair and shirt half untucked, teetering back and forth and slurring out, “Hey basketball, you think you’re better than ME? I’ll put my FIST up your ASS!” The sports nobody cares about (ice curling, rhythmic gymnastics) try to defuse the situation and calm weightlifting down, preferring a nice mellow party that’s as boring as they are. The other wacko sports that are almost as obnoxious as weightlifting (wrestling, boxing) stand back and encourage the fight with shouts of, “Yeah weightlifting! Beat the PISS out of basketball!” while the sports that are purely devious and sneaky (cycling, track and field) use the fight as a distraction so they can creep around the house and steal stuff.

The hosts of the party have tolerated weightlifting’s behavior for a long time. Despite all the mortifying social habits, the hosts (the IOC) don’t truly want to get rid of weightlifting, at the end of the day. If they did, they would have chucked us years ago. They know we’re pretty badass and even though we don’t have gargantuan mainstream popularity, lots of people like us. So they just choose to keep us at the party and hope we don’t ever truly cross the line and throw synchronized swimming through a window or something.

Are we reaching that point now? Is this current drug scandal (and the obvious additional scandals that could arise) enough to break the camel’s back? Is the IOC truly considering removing Olympic weightlifting from the Olympic Games?

It’s definitely possible. Back in 1988, there was an extremely nasty drug shenanigan at the Olympics with the Bulgarian weightlifting team. You old timers remember that one? Bulgaria had to yank their whole squad halfway through the competition because they were getting popped all over the place and they knew it would continue if they stayed on the platform. In other words, our sport was giving a nice fat black eye to the Games. Thank god Canadian sprinter Ben Johnson tested positive and drew 100% of the galaxy’s attention to track and field, leaving the IOC with much bigger things to worry about than lousy old weightlifting. That might have been just enough to save our bacon.

But how long can it go on? Like many organizations, the IOC’s primary interest is money. Sports that bring in revenue are usually going to be safer than sports that don’t. Weightlifting isn’t one of the most profitable sports at the Olympics, so… that’s not good. However, weightlifting is a globally popular sport (Yes, American sports fans, there’s a great big world out there where LeBron James isn’t the most important human being in existence). We’ve also got the longstanding tradition of being one of the oldest sports in the Olympics, which maybe gives us just a smidgen of security.

But who knows if those things are enough? Longstanding tradition didn’t help wrestling much, as we saw a few years ago. And if weightlifting eventually finds itself in a situation where the disgraceful scandals outweigh any positives the sport produces, what happens then?

Everybody knows we’re not the only dirty sport in the world. Most people know we’re just one of many sports that involve drug use. However, our sport doesn’t produce millions of dollars that we can use to deflect the bullet, like track and field does. Trust me people, we’re in a very vulnerable position these days. The juicers and juice supporters might just get us all lined up in front of a firing squad.

I hope this doesn’t happen. This sport is one of the foundations of my whole life, just like many of you. And no matter what anybody says, we don’t want to lose our place in the Olympics.

Jeff
Maybe that is why the US Olympic center just shut down the in house weightlifting. Sad days ahead
Romulus Hillsboro
I wonder why athletes from other sports aren't getting caught? It's one of the worst kept secrets that drug use is rampant in nearly every high level sport. Seems like a witch hint to me.
Leon
I love your party analogy. Made me actually laugh.

I am extremely disappointed by the news and a little fed up by the situation.
Even when looking in weightlifting forums the most prominent topic are
PEDs. I think for most hobbyists it's the lure of the forbidden. It is discussed
ad nauseum as people are fascinated bythe idea of becoming a super human.
If only the bad conscious wouldn't stand in their way, but perhaps by discussing
it long enough the nagging thoughts will go away.

Coming back to weightlifting. I am disappointed not only because so many lifters are banned now. I am disappointed, because the record books are re-written. What is the point of watching the Games only to know that the winner might be banned in a few years anyway?

I am aware that the IOC does this in order to battle the drug problem. I am not saying there is no drug problem. It is obvious. I am speaking purely from the perpective of a spectator. What is the point to watch a competition when the results will be altered in a few years? Would anyone follow Basketball with the same vigour, if they knew the Cavaliers might lose their championship in a few years?

Now I understand why the senior lifters in my club don't follow international competitions. They know better.
I'll do the same.

Louis
Hilarious and well written. Unfortunately true, but not the only sport fuelled by chemicals.