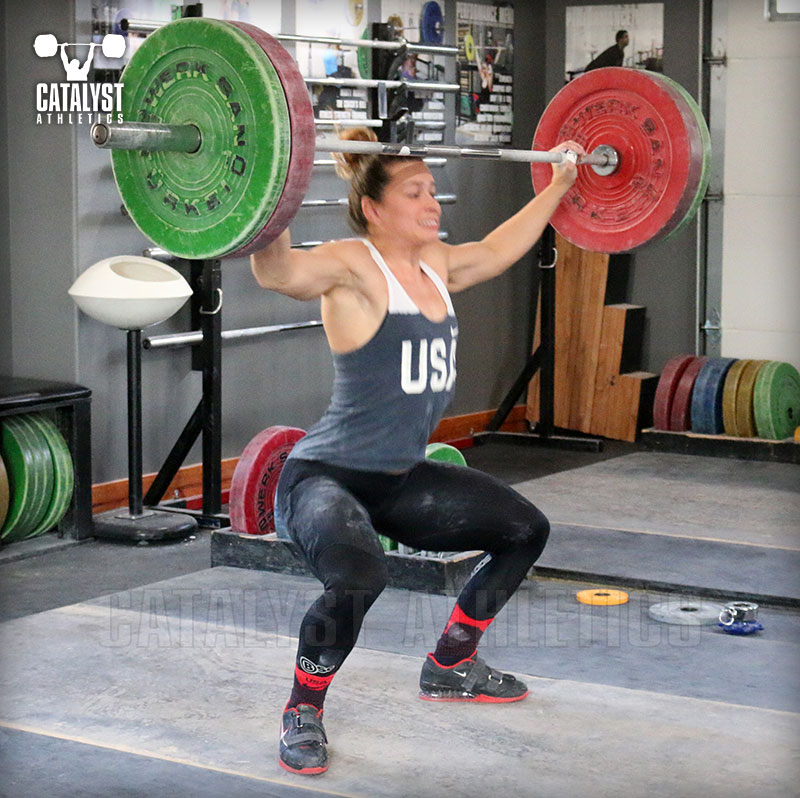 Jonathan Asks: I am a trainer and I have a client I have been working with about a year she is 5'2" 120lbs we have done primarily strength work she can deadlift about 180 with good form but her hand and grip strength are sub par also squat form is a little troublesome at times she pivots to the ball of her foot at the bottom slightly which causes her heels to turn in and it's not all the time just sometimes other than that squats are great strength is improving. I'm trying to teach her to clean and snatch and I am using body bars as instructional tools for form, alignment, bar path. I have a hard time getting her to be explosive what are some tips or tricks that you use for grip strength and building speed and explosiveness in someone who is lacking it in the clean and snatch. We do box jumps on a 30 inch box we do single leg stuff the list goes on just would like a little guidance, she has been one of the slowest learners I've had.

Greg Says: First of all, I have to be the bearer of bad news and say: Not everyone is going to be good at the snatch and clean & jerk, no matter what you do. Just like not everyone can be a good baseball pitcher or a good boxer; some people are not well-suited for certain physical activities, and some, for one reason or many, are not good at motor learning period. Speed as a physical quality is also something that is determined more by genetics than training—athletes are either fast or not. All athletes can be made faster through training, but the rate of improvement and the ultimate degree are definitely limited by genetic predisposition.

I don’t know what’s going on with her squat, but it sounds like she’s just immobile, and it may only happen occasionally because she’s not adequately warm and loose on those days. Or it may be that she simply doesn’t have her feet in a good position (and is not consistent with where she places her feet, which would explain why it doesn’t always happen).

If she’s struggling with the technique of the lifts, she won’t be explosive, even to the level of her ability. The more you’re thinking about a movement, the slower it will be. Worry less about the speed right now and emphasize the movement itself being proper and consistent. Have her practice it in pieces, and when I say practice, I mean practice over and over and over and over to the point where you’re both bored with it. Break the lifts into even smaller pieces if needed, and as those individual pieces get consistently good, then start stringing them together gradually, practicing each stage until you can’t stand it.

I think one of the biggest problems with technique training that people have is that they simply don’t invest enough time. It’s boring and frustrating and unglamorous. People will try a certain drill or exercise once or twice, then abandon it because it didn’t magically cure their problem. What they forget is the problem they’re trying to fix is a habit they’ve spend thousands of repetitions forming—20 repetitions of a corrective drill won’t overwrite that suddenly. If someone, like your client, is a particularly slow learner, you have to invest even more time.

With specific regard to improving the speed of the snatch and clean, there are really three distinct elements to making a lift quick: the final explosive extension of the knees and hips at the top of the pull, the timing of the change of directions at the top, and the aggressiveness of the pull under the bar. Each is trained differently, and again, a quick athlete will be quick naturally with all of these, and a slow athlete will be slow at all of these.

Try very abbreviated extensions or lifts: start from the high-hang, and even some reps with only knee bend and a vertical torso. You’re looking to get a very abrupt and snappy movement—the less time and distance you give her to extend, the better she’ll feel that abruptness. This will address all three elements somewhat. When she can move quickly from this position, she can move quickly with a full lift as long as she understands the timing—that is, waiting long enough to initiate that final explosion.