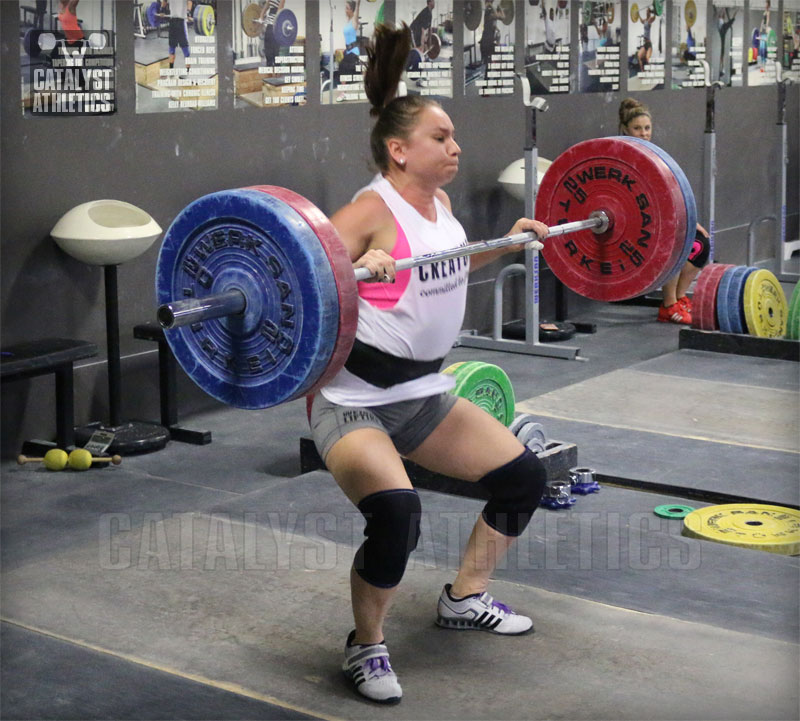 Becky Asks: I've been Crossfitting for about 2 years, but in the last 5 months I've been trying to improve my Olympic lifts. What are some good exercises to help me get under the bar faster? I have flexibility issues, so my squat isn't perfect, which adds to the problem. But I'm just not fast enough yet. Thanks so much for your help!

Greg Says: Your movement under the bar can be slow for a few different reasons, and that will affect what exercises help. If it’s truly the pull under the bar that’s slow, it may be a strength issue, a technique issue, or a lack of aggressiveness. I’m going to discuss everything using the snatch, but you’ll be able to apply it to the clean pretty easily.

Let’s worry about strength first. You can think of the third pull in three basic parts: the initial pull of the body down toward the bar, the turnover of the bar, and the punch up under the bar. Each of these parts can be strengthened best individually because one usually limits the weights than can be used for others, but can also be trained together with certain exercises.

For the initial pull under, it’s an issue of arm, back and shoulder strength—the ability to forcefully pull the elbows up and out. The simplest exercise to strengthen this movement would be a tall snatch high-pull. You won’t be able to use a lot of weight—it’s not a strong movement for anyone—but this is pure upper body strength in exactly the position and movement you want. You may not even be able to use an empty barbell—you may need to use a lighter technique bar or even dumbbells. Stick with 5-6 reps, 3-5 sets.

You can also do snatch high-pulls from the mid- or upper-thigh and use the legs and hips to accelerate the bar initially, then use the upper body to finalize the pull to the top position. This will allow you to use more weight as well as better simulate an actual lift. Stay flat-footed if you want to emphasize the upper body more, as this will force you to limit how much hip and leg speed you can put on the bar.

To use even more weight, do snatch high-pulls from the floor with maximal speed.

To strengthen the turnover of the bar, you’ll need to use some muscle snatch or long pull variation. You can use the same kind of principles described above for the high-pull. To completely isolate the upper body movement, perform a muscle snatch from the tall position, which means you get no leg or hip at all. These will be very light—don’t make the mistake of trying to load it up or you’ll end up changing the movement, which defeats the purpose. You can add more weight by doing the muscle snatch from the hang or floor. Snatch long pulls are another good exercise for turnover strength because they keep more tension on the upper body throughout the movement.

Finally, to strengthen the punch up under the bar, use snatch balances or drop snatches. Drop snatches will not allow you to use as much weight, so if you want to load it up, do a snatch balance. These are also great exercises to improve your speed and timing in the very last portion of the third pull (which is really a push).

Strength may not be the problem; it may be technique. If you’re not moving yourself and the bar optimally, your pull under will be slower than it should be. Be sure your elbows are rotated to point to the sides throughout the first and second pulls so they will remain properly oriented upon entrance into the third pull. Don’t worry about shrugging under the bar—pull with your arms and the shrug will come along at the right time and to the right degree. Pull the elbows up and out and keep your body and the bar in immediate proximity—the bar should be close enough to smell on your way past it.

Continue pulling the elbows up even as your turn the arms over—keep tension on throughout the movement. It’s common to see lifters suddenly get slack in the system at this point, and that only slows them down and increases the chance of an unstable receipt of the bar. As you finish the turnover, flip the hands back into the proper position and punch up under the bar with a relatively loose grip. This entire movement must be fluid and extremely aggressive.

You can use tall snatches to work on the entire movement. Focus on keeping your weight back over the feet rather than shifting forward as you initiate the movement. Have someone stand at your side and make sure you’re keeping the bar and your body as close to each other as possible.

This leads to the final consideration: that your lack of speed under the bar is actually coming from earlier in the lift. Many athletes are so focused on the upward extension of the pull that they continue pulling long after it’s productive. You have an extremely brief moment when the bar is weightless at the apex of its elevation, and if you’re not already moving under the bar, you’re losing the opportunity. The moment your hips and knees reach their final extended position, you must transition your feet and pull under—the finish and initiation of the pull under should really occur almost simultaneously rather than one after the other. In order for this to happen, it’s critical that the bar and the hips meet properly—the snap of the hips into extension will actually help get them back and moving into the squatting position faster.

To work on this, you can high-hang snatches or power snatches—this will allow you to better focus on the final extension and change of direction. You can also snatch or power snatch off of high blocks (mid-thigh or higher).


2 Comments
Steve Keys
How do you simulate turning over the bar in a clean like you do a drop snatch or snatch balance in the snatch?
Steve - Since you arent moving the bar overhead there isn't much besides front squats for what you are referring to. You can also do things like scarecrow cleans, tall cleans and dip cleans as techniuqe primers for the clean. You can find those exercises on our exercise library here.