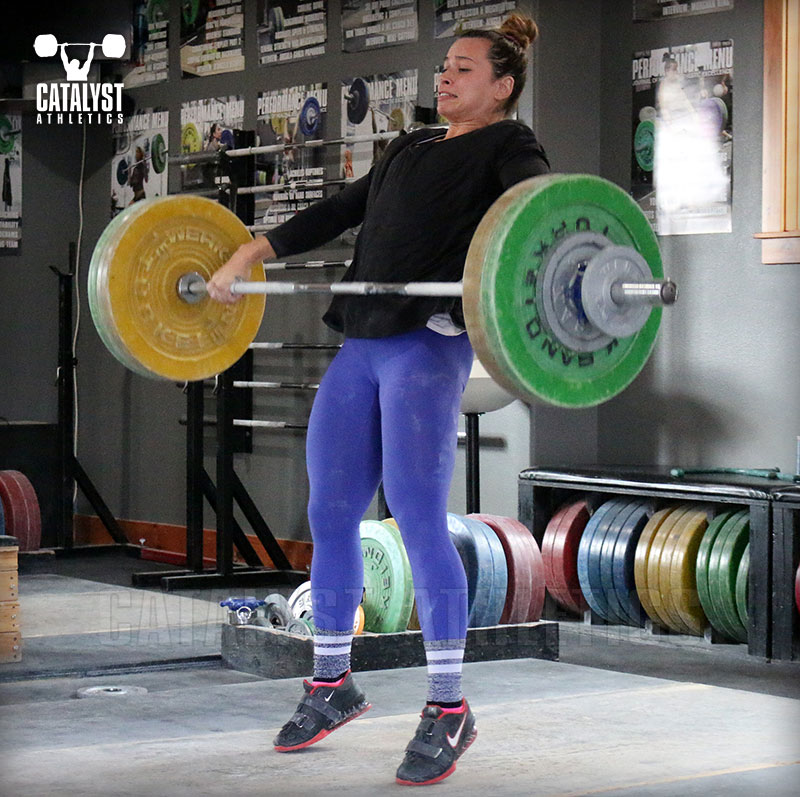 See more articles & videos like this in the Pulling Position & Balance collection.
Most commonly, we talk about jumping forward the snatch and clean, and with one notable exception of a “coach” who will remain unnamed, who allegedly used to yell at his lifters that they weren’t jumping far enough forward in the clean, everyone agrees it’s a technical error requiring correction (preferably prevention).  What we tend to talk about less, and about which there is consequently more confusion and not as clear of a consensus, is jumping backward in the snatch and clean.

I will state unequivocally that jumping forward in the snatch or clean is an error that needs to be corrected. But jumping backward is a different story. It’s not necessarily a problem, but it could be—which it is depends on why and how it’s occurring.

There are quite a few examples of very successful lifters who jumped backward significantly. My favorite example (because he’s my favorite lifter of all time) is Bulgaria’s Zlaten Vanev. Bulgarians Stefan Botev and Ivan Chakarov are other notable examples.

A backward jump can be an effective lift style for certain lifters. It doesn’t inherently confer an advantage across the board, i.e. it’s not something that all lifters should learn to do, but the lifters for whom it’s effective should embrace it and refine it to maximize its benefit for them.

An important consideration is also how ingrained the habit is. If a lifter just started doing it last week, and it’s a problem, correct it. If you start working with a high-level lifter who’s been jumping backward for 5+ years, more than likely trying to correct it is going to actually create more problems than it solves.

My rules for whether or not a backward jump is acceptable are pretty simple:

Some of the same things that create an actual backward jump can cause this backward sweeping of the feet, but ultimately it’s a failure to move the feet and legs properly during the pull under the bar. In other words, if a lifter’s balance is backward rather than centered over the foot, the body believes it’s falling over and will naturally reposition the feet backward in order to prevent falling on its ass.

That said, even with a backward balance, a lifter can position the feet properly, which means planting them flat on the floor directly under the combined bar-body center of mass—it will just likely be less of a natural movement and require some direct focus and practice.

Conceptually, the lifting and replacement of the feet should be considered as the same lower body movement of a squat—flexion of the hips and knees together—but with the knees moving up toward the body rather than the body moving down toward the knees. Typically what occurs with the backward-sweeping feet is that the lifter is flexing primarily at the knees—if the upper legs stay in approximately the same place and the knees bend, the foot moves backward because it pivots around the knee at the end of the lower leg. The solution is actively flexing the hip, or as I prefer to think of it, lifting the knees up and keeping the soles of the feet parallel with the floor.

To work on this leg and foot movement, start with drop snatches and snatch balances for the snatch—these will allow you to focus completely on the legs and feet, accumulate some practice, and get comfortable with it. Then progress to tall snatches / tall cleans and snatches from power position / cleans from power position or dip snatches / dip cleans to start incorporating an actual pull under the bar with this leg movement, while still performing an abbreviated movement to allow more focus on the legs.

With snatches and cleans themselves, focus on continuing to push against the ground with the legs all the way up through the pull—maintaining the pressure of the feet against the platform until you’re finished extending. That pressure is an anchor keeping the feet in place, so releasing it allows the feet to move backward. You can try a complex like snatch/clean pull + snatch/clean as long as you’re doing the pulls correctly. Finally, you can place a small piece of rubber mat (1/4-1/2” thick) behind your heels (give yourself a few inches at least) as an external cue to lift and plant the feet instead of sliding them.

If you’ve determined that a backward jump IS an error, or if it’s just excessive and needs to be reduced, let’s take a look at the possible causes and how to address them.

Over-Extending This is pretty simple: Extending the hips too much, bringing too much of your trunk too far back and consequently shifting your weight too far back over your feet even if your balance was correct earlier in the pull. This may also involve the legs actually angling backward rather than being vertical with the hips somewhat hyperextended like we want, which then moves not just more of the trunk’s mass backward, but more of the rest of the body and the bar itself. Snatch/clean from power position and snatch/clean pull + snatch/clean can help retrain the correct balance and angle of extension.

Weight Too Far Back on Heels Even simpler than the first one. A lot of lifters believe (or have been told) to get their weight all the way back onto their heels during the pull. This is a pretty basic concept—if your weight is behind the middle of your foot, you’re moving backward. Some lifters will do this and end up not jumping backward because they then drive the hips far enough forward to offset the initial imbalance, but this fixing one problem with another is not recommended. A better idea is to retrain yourself to balance over the foot with only a very slight preference for the heel during the pull. Slow-pull snatch/clean, snatch/clean pull + snatch/clean, halting snatch/clean deadlift, segment snatch/clean deadlift, and segment snatch/clean can all be helpful for this.

Pushing the Bar Too Far Back The bar should move back slightly from its starting position on the ground as it moves to the hip/upper thigh. However, this backward motion is often exaggerated, pushing the bar too far back into the lap while the hips are considerably behind the feet still—this means that much of the combined bar-body mass is behind the feet and consequently the complex is being directed backward. This will often be combined with incomplete hip extension because the body knows that complete extension will move the center of mass even farther back, and this exceeds what it believes it can manage without falling. Work on slow snatch/clean, slow pulls, halting snatch/clean deadlifts, segment snatch/clean pulls and complexes combining a pull or deadlift in which you correctly control the bar and body positions followed by a snatch or clean.

Opening the Hips Too Soon Finally, probably one of the most common problems is opening the hips prematurely in the pull. Rather than staying over the bar with the shoulders and waiting to initiate the final upward explosion as the bar reaches the thighs, lifters will often begin pulling the shoulders back as the bar is at the knee… I’ve even seen the shoulders start moving back when the bar first leaves the floor. This simply shifts too much of the bar-body mass toward the back of the foot and literally creates a backward fall rather than an upward lift. All of the same exercises listed above will help: halting deadlifts, segment pulls, segment snatch/clean, slow-pull snatch/clean—anything that forces you to stay over the bar longer, feel that position and timing, and strengthen yourself to be capable of maintaining that posture high enough in the pull.

Brock
Hi,
The entire "Body, barbell and feet: they're not the same" section pretty much describes me perfectly. You mention using a rubber mat to lift the feet instead of sliding. Is the purpose of this to use as a tactile cue to "block" the feet from moving backwards? Or is it designed to use to land on the mat requiring to lift your feet instead of slide like you described? Thanks for the great article.

Brock
Brock - You want to use the mat to prevent backwards and forward movement of the feet and avoid making contact with the mat at all.