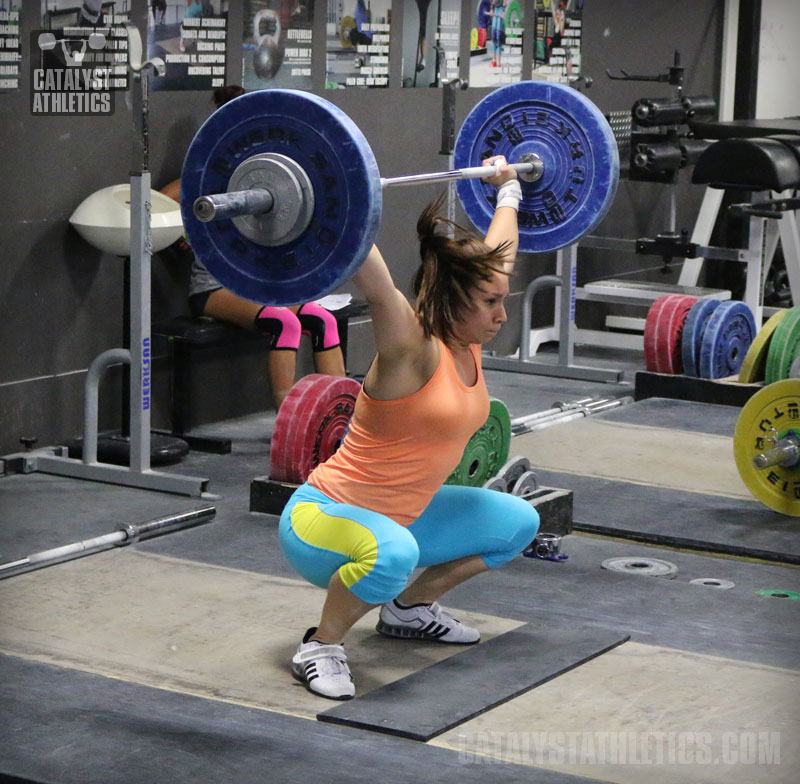 See more articles & videos like this in the Pulling Position & Balance collection.
One of the most frustrating technical problems as a weightlifter, and as a weightlifting coach, is the dreaded forward jump. Unfortunately, it’s pretty common, and worse, it often proves extremely difficult to correct. In fact, there are a few world-class lifters who jump forward, which goes to show you that even teams of the best athletes and best coaches in the world struggle to do things perfectly. Don’t mistake this as my saying don’t worry about your jumping forward with the excuse that you saw some guy at the world championships do it; I’m just saying, go into this process knowing that it may be a long, discouraging one, and that you may never fix it completely. That said, you should keep trying, because even if the problem lingers on some of your heaviest lifts, a reduction will be beneficial; and, of course, if you can’t fix it completely in short order, don’t resort to buying a snowmobile quite yet (those of you who don’t train with the Catalyst Athletics team won’t understand how astoundingly funny that joke is—that’s your own fault).
With any technical problem, we can use a couple different approaches to correcting it. There’s the shotgun, scorched earth, kill everything that moves approach, which can be quite effective, and is a lot easier than making an accurate diagnosis and then determining corrective strategies; and there’s the finesse approach, which requires a solid understanding of lift technique and mechanics to allow the correct diagnosis of the source of the problem and subsequent selection or creation of appropriate corrective exercises, drills, athlete education and/or coaching cues. I’m going to cover both approaches below, listing some of the most common sources and corrections under the finesse section.
Scorched Earth
The scorched earth approach is kind of like a weightlifting analog of conventional medical practice: treat the symptoms with near-fatal doses of pharmaceuticals and worry about collateral damage later. In other words, we’re not going to even bother considering the cause, and simply find ways to make the lifter stop jumping forward one way or another with just about anything short of blunt force trauma to the head.
Coach Mat This is as simple as it possible gets: provide a physical obstacle to jumping forward. I use a scrap of ¼” rubber flooring about 3’ x 10”: lay this on the platform in front of the lifter’s toes and you won’t even need to say anything to them. Now, because we don’t actually want to kill or disfigure our lifters, a couple points: Use a thin mat. Don’t throw a 3” thick piece of lumber on the platform. With something like a ¼” or 3/8” rubber mat, if the lifter does happen to land on it, the consequences aren’t dire. A strip of thin mat will also slide forward out of the way if the lifter kicks it. In either case, the consequence of jumping forward won’t be one that prevents the athlete from even lifting again. The other important point is to not start with the mat right against the lifter’s toes—when first beginning this, place it about as far in front of the lifter’s feet as he/she normally jumps (e.g. if the lifter jumps 3” forward, leave 3” of space between the mat and the front of the lifter’s shoes). Remember, this is a threat, not actual battery. The mere presence of the mat, even if it’s a few inches away, will often be adequate to keep the lifter from jumping forward, or at least reduce how far he/she moves forward. Over time, as the lifter gets better and better with the problem, begin starting the mat closer and closer to his/her toes. Use the mat in every snatch or clean training session the lifter does until the problem is sufficiently improved.

Coach PVC This is the same idea as Coach Mat but vertical. This is more appropriate if you think the bar is moving forward away from the lifter significantly as the cause or part of the problem. You can kneel alongside the lifter with a PVC pipe standing vertically a few inches in front of the bar (near the end, outside the plates). Hold the pipe below the bar so that it can travel up without hitting your hand at any point, and be ready to get out of the way if needed. But the genuine Coach PVC is a little device I invented to get out of this sketchy position and also allow a lifter to work on the problem without me there. Get a galvanized pipe flange and screw it onto the end of your PVC pipe, and you have a pipe that will stand vertically on its own, but will also fall over easily if hit, getting out of the way. Just like with Coach Mat, give the lifter more space initially and gradually move it closer, although there will always need to be a few inches of space.

Knowing what you should be seeing during all of these parts of the lift requires a firm grasp of lift technique and experience with watching a lot of lifts by a lot of lifters. This only comes with time and practice—it’s not really something I can present to you in an article. Work with more lifters, experiment with more corrections, keep good notes, talk with other coaches and athletes, and you’ll get better and better at it.

See more articles & videos like this in the Pulling Position & Balance collection.

What about jumping backwards in the snatch/clean? How much of an issue is it and what are some ways to remedy if necessary?

I tried doing a search and I could not find an article about this.

Greg Everett
Marc -
Jumping backward ranges from a minor problem to not at a problem at all. Some lifters are more effective by directing their weight back such that they move backward somewhat - the key is that everything has to move back together - bar, body, feet. More common is a lifter moving only the feet backward, which has the same effect as the bar moving forward - base is not under the mass it has to support. You can use the Coach Mat trick for backward jumps, but first make sure it's an actual problem. If it's just the feet moving back, you'll have to do things that make the lifter continue pushing against the floor longer in the pull, fixing balance that's too far back at the finish of the pull, etc.
Thanks
Thanks Greg I have been struggling with coming forward for a while I feel this should help.
www.strongsidecrossfit.com
Donnie Mac
What is Cop and CoM?

Also, jumping forward or backwards has something to do with torso to leg ratios. People with longer torso and shorter limbs tend to jump back while people with long legs and short torso tend to jump forward. And most of the elite lifters have short limbs and long torso, this sports does favor this body type more. Hence, you see more people jumping backwards. Do you agree or disagree?
Center of pressure and center of mass.

I don't agree with that. Few elite lifters jump forward because doing so is an error and nearly all lifters at that level have achieved a high level of technical proficiency that precludes it. Jumping forward or backward is nothing more than an issue of weight balance over the foot of the bar-body system, which can be influenced by many things, but can be controlled in the same fundamental ways regardless of proportions. Proportions will dictate things like relative dependence on legs vs hips, minor posture differences in the pull, etc, but none force changes in balance.