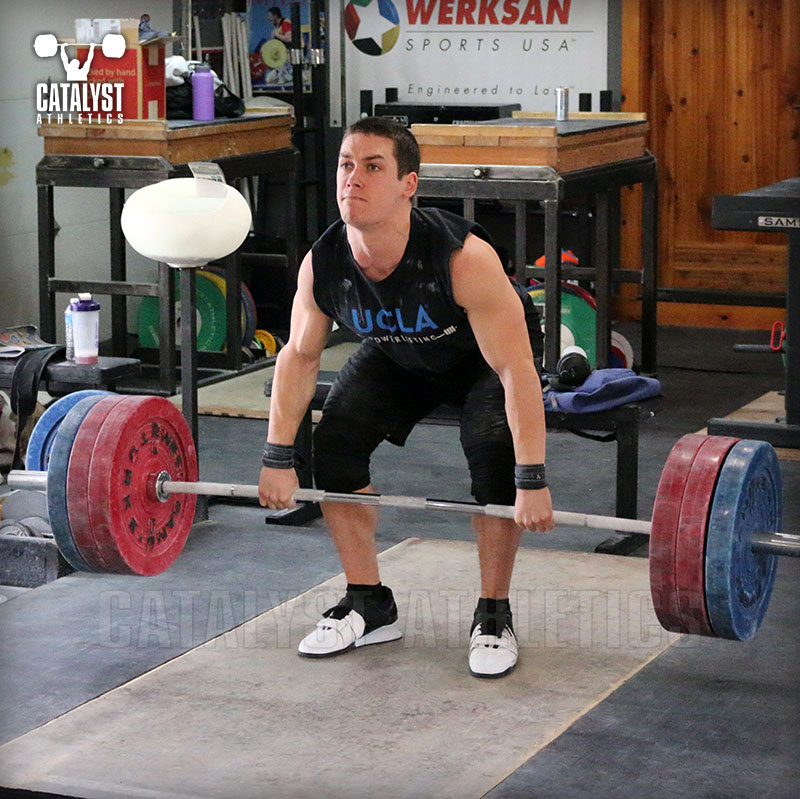 Ryan Asks: What can I do to improve on keeping my chest up and ass down on the snatch pull as the weight gets heavier? I find myself bouncing the bar a little too hard off the hips and I now have a bump that hurts. I would appreciate any tips. Thank you.

Greg Says: There are two parts to this—first, knowing you need to maintain a more upright posture, and second, being physically capable of maintaining an upright posture. You obviously have the first part down, so we’ll focus on the second.

Except in cases of lifters with very short and strong legs (the same who are strong squatters), the natural tendency of the body as it’s lifting a weight from the floor is to raise the hips faster than the chest. This is the knee joint opening to a larger angle at which its mechanical disadvantage is reduced to a point at which it can then actually move the load. The more closed the knee joint is, the harder it is for it to extend under load, so the body will shift itself into a position at which the angles of the involved joints allow the load to be moved the most easily. The solution to this, as we’ve decided we want to lift in an upright posture rather than just let our bodies do whatever they want, is to strengthen the legs until they’re able to move the load in the position we want. In short, if you can’t maintain an upright posture when pulling from the floor, it’s due to inadequate leg strength.

To fix the problem, you need to strengthen your body in the posture you want to use in the pull. This means ensuring you’re squatting with an upright posture, whether it’s front or back squats—keeping your chest up and hips in as you stand rather than allowing your hips to shift back and leaning your trunk forward. Likely at this point this will be happening to you as your weights increase, so you’re going to need to give it time and put in a lot more volume at weights that allow the correct posture than you’re doing incorrectly. It doesn’t mean you can’t squat heavy anymore, but you need to really fight for that position even if it makes your heavy squats feel much slower, and you need to make those suboptimal squats the smallest fraction of your squat volume that you can manage.

The other part of this is training your pulling posture directly with pulls and variations. Remember that strength is very position (joint angle) specific—you will get strong in whatever positions you train and that strength will diminish the farther you diverge from those positions. So like the squats, you need to force the proper positions and avoid reverting to where you’re currently strongest since that’s exactly the problem you’re trying to correct, and training that improper position will simply strengthen and reinforce it.

Snatch and clean pulls and deadlifts on a riser will help strengthen the posture and legs off the floor. Adding 3-second pauses 1 inch off the floor and at the knee will help even more and serve as self-checks for your position. Slow eccentrics (3-6 seconds to lower to the floor after each rep, or after the last rep of a set) are also effective, but only if you’re in the correct position. You can do these things with just about any pull or deadlift variation.

Kevin Reece
Good article. Many times lifters coming in from other sports have strength imbalances that cause poor form and lead to injury in time. Weak legs leads to leaning too far over the bar thus putting a large amount of stress on the lumbar area of the spine as the back attempts to act as a lever to lift the weight instead of the correct timing of the body elevating the barbell. I have seen several European lifters, many now on drug suspension, lifting like this and getting away with it because of the tremendous amount of back strength they possess. Hobby and recreation lifters would never last long using such poor technique.