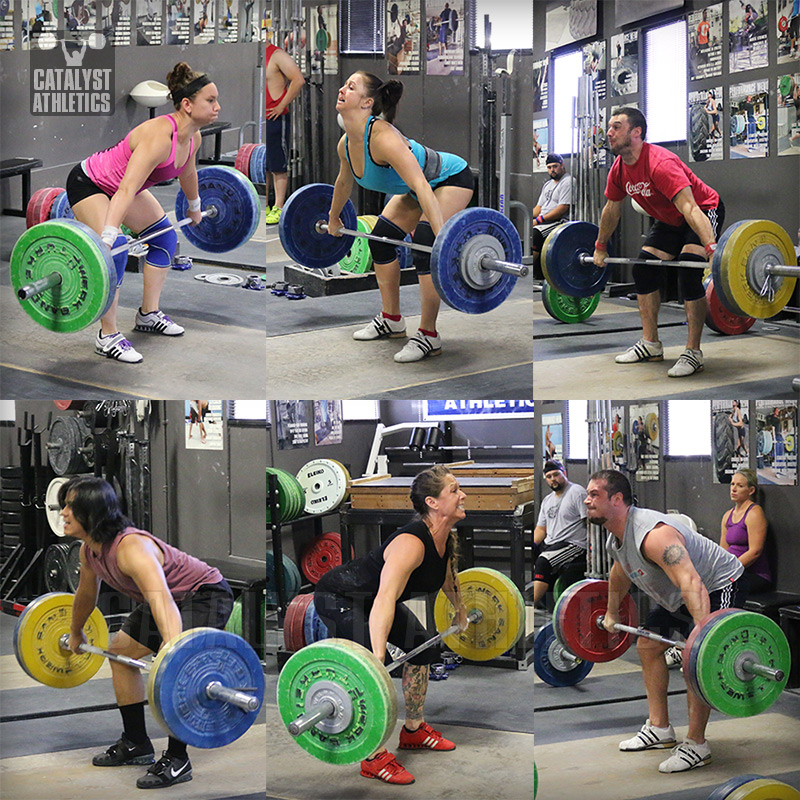 See more articles & videos like this in the Pulling Position & Balance collection.
Posture and balance in the pulls of the snatch and clean are as important as anything gets in the lifts (every element is the most important). The shoulders should never be behind the bar at this point, regardless of proportions or technical style. All that will change due to proportions are the angles of the hip and knee, and the angle of the back relative to the floor (e.g. one lifter will be leaned over to a greater degree than another).

In no way do proportions require the shoulders be behind the bar earlier than mid-thigh, and such a position does not confer any advantage to any lifter. All it may do is make the hang position more comfortable for a lifter who lacks the postural strength to maintain the proper position—such an increase in comfort is irrelevant to lift performance.

Being behind the bar at this point creates problems in balance, speed, drag and bar path. The lifter will either move excessively backward, be forced to cut the extension short to prevent excessive backward imbalance, or actually jump forward in response to the bar moving forward.

Such a position (shoulders behind the bar prematurely) reduces the potential speed in the final explosion by reducing the power that hip extension can contribute to the movement. Additionally, the shoulders being behind the bar makes it more likely the bar will drag against the thighs, slowing it.

Finally, as part of the shoulders moving backward, the knees move forward prematurely, pushing the bar away from the lifter and disrupting an ideal bar path.

Ole
Thanks for the article - very useful (I find the pulling position(s) during the pulling phase of the lifts a somewhat tricky issue)!