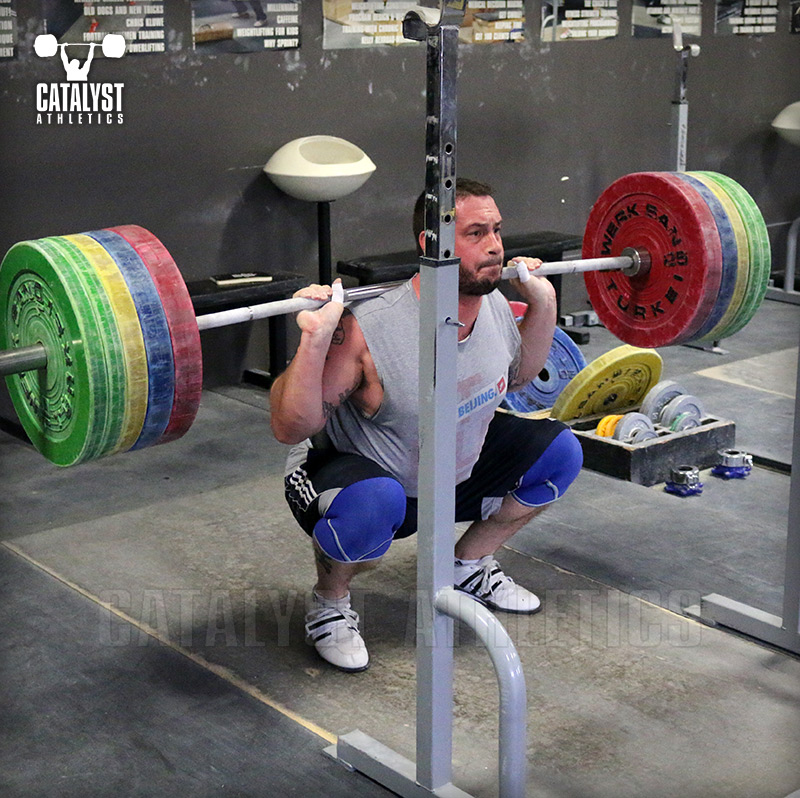 It’s been months since the last installment (see the first article here), so I figured it was probably time for another in case the three of you who still care are curious. I actually had to go back and skim through the last article because I had no idea when it was or what I said.

The surgery was 23 months ago. I have very little pain or discomfort in the shoulder—the only pain I experience is when performing jerks or push presses—the lower to middle range of the movement causes some minor pain, I believe because that restricted rack position mobility creates a rougher transition into the pressing motion and is likely causing the arm to move somewhat differently than the other side. Really the only other issue is some discomfort if I sleep on that side too long (more so than on the other shoulder) and a little soreness from time to time after training.

My range of motion has actually improved considerably in the last couple months, to the point that my jerk overhead position, which has been the biggest lingering mobility issue, feels nearly back to normal—I can get close to my old position, although I do feel significantly more tension on the injury side relative to the other, and do get some pain through that pushing under motion as mentioned above. Rolling on a softball under the arm usually reduces the pain a bit, but it’s inconsistent.

The clean and jerk rack positions are definitely still restricted, and in fact even my non-injured side is tighter than it was pre-injury, presumably because it hasn’t been used regularly in the full position since. The scapular protraction and external rotation combination is definitely tighter, and varies more day to day than formerly.

I competed for the first time since The Day at American Masters in Buffalo in November, about 14 months post-op. It wasn’t exactly a staggering total, and I was not pleased with the snatches (missed 2nd and 3rd because my head was up my ass), but it was a meet and a total (116/145)—a mere 56kg under my last competition total.

A couple months after that, I did 121/150 in the gym and jerked 155 with 160 overhead for literally three seconds, but couldn’t keep the injured shoulder stable enough to save it (I can’t keep that shoulder blade fixed tightly enough—it starts to sag and protract).

Over the winter, I developed some medial epicondylitis in the right elbow—the non-injured side. Initially, I actually had some pain in both elbows in the overhead position due to the limited shoulder mobility preventing the elbows from locking completely and creating additional stress. The left (injured) side cleared up on its own in a few weeks without any changes in my training, but the right continued to worsen, presumably from a combination of that side doing more stabilizing work overhead, as well as the fact that I spent a couple months beating the living shit out of those flexor muscles with long daily snow blowing, shoveling and plowing on an ATV while we were getting hammered with the most snow this area has seen in 15 years.

I backed off some of the overhead work and things like pull-ups that were obviously aggravating it, and tried to reduce excessive grip-demanding work, but made virtually no progress. Eventually I was doing zero overhead work, no competition lifts or variations, and when doing pulls, I was using those goofy wrist wraps with the metal hook attached to allow the absolute least stress to my grip possible. They were uncomfortable, but at least my elbow got a break. Weekly ART, Graston, daily stretching, self-massage and ice (yes, I still believe icing is effective in certain circumstances) helped a bit, but after several months of extremely little progress, I just got a cortisone shot. That cleared it up for about 2 months, but it’s now returned, so I’m scheduled for PRP next month.

Still struggling to put bodyweight back on, and for a long time I wondered if I was forever doomed to weigh 101.5. Finally I just started working with WAG to make me accountable for force-feeding myself, and I’m now hovering around 103.

Training in general has been relatively low volume compared to what I was doing pre-injury, partly because I’m still limited in what and how much I can do because of my elbow primarily, and also because I’m 2 years older (which feels more like 10 at this point). Oddly enough, loss of leg strength has been the biggest problem following the injury—I just haven’t been able to get it back to where it was, which seems odd considering I’m able to focus on it these days.

I’d still like to compete in at least one more senior national championships, but at this point, it’s hard to say whether or not that will work out (if so, I will definitely be opening first in the D session). Once my elbow is fully functional again, I’m sure I’ll be somewhat more optimistic. If I’m able to make it to the American Open this year, I’ll make nationals next year.

The question I get periodically is if I would do anything differently than what I’ve outlined in this series. As far as actual rehab of the shoulder goes, no—I’m pretty satisfied with how that’s turned out, especially considering the surgeon’s warning that it would be extremely difficult and potentially impossible to regain my previous mobility. Primarily what I would change is being overly anxious to work on the snatch and clean & jerk again. My problem in this sport from day one has been a lack of leg strength, and the last 2 years was a perfect opportunity for me to focus on that. Instead, I continually strayed from that intention because I was too eager to get back to the competition lifts (in my defense, the snatch and clean & jerk are fun, and squats are stupid). I suppose my lame elbow is a great excuse to get back to that goal. We’ll see how long that lasts.

Kent Johnson
As someone who is 36, had bilateral shoulder surgeries 2 years ago (labrum repair, biceps tenodesis, acromioplasty, distal clavicle excision), just got over medial epicondylitis, working through patellar/quadriceps tendonopathies, and is experimenting with PRP (to try to _tighten_ one of my shoulder capsules (didn't work)), I can sympathize with much of this. Consider me one of the aforementioned "three" who is anticipating a Part 6. Hang in there.
Kimbre
You are a beast. So strong and even stronger following the mental, emotional, and physical pain and challenges that come with injury and rehab. I hope you celebrate how brave and diligent you are and all of the healing you have facilitated in the patience and perseverance. We are rooting for you and your life goals, both inside and outside of the gym.💪🏼❤️
Michael
Had a labrum repair myself and would love to read Part 6.
Kelly M
Well now I really want to read Part 6!! I had the dislocation and labral tear surgery 14 years ago. I have been weightlifting for 6 years and my shoulder has got progressively worse. I thought I must have torn something again to account for the pain and huge reduction in mobility, but unfortunately I now have advanced osteoarthritis (instability arthritis) in that shoulder. I'm trying to hang in there but my squat and pulling strength is so far beyond my snatch and c&j ability due to the shoulder. Anyway I'm very impressed with your recovery progress and hope you can keep the gains you've made.
One thing I did want to ask, was the elevated left shoulder when you first started back snatching... I have this problem and can't seem to fix it, what was the cause, poor scapular tracking? And did you manage to fix this particular problem?
Thanks
It's just compensation for the reduced mobility - since that humerous doesn't move as freely relative to the scapula anymore, the scap has to move into different positions to allow the wanted arm ROM. It's gotten better (now about 5 years post-surgery) but I don't think it'll ever be 100% normal again.