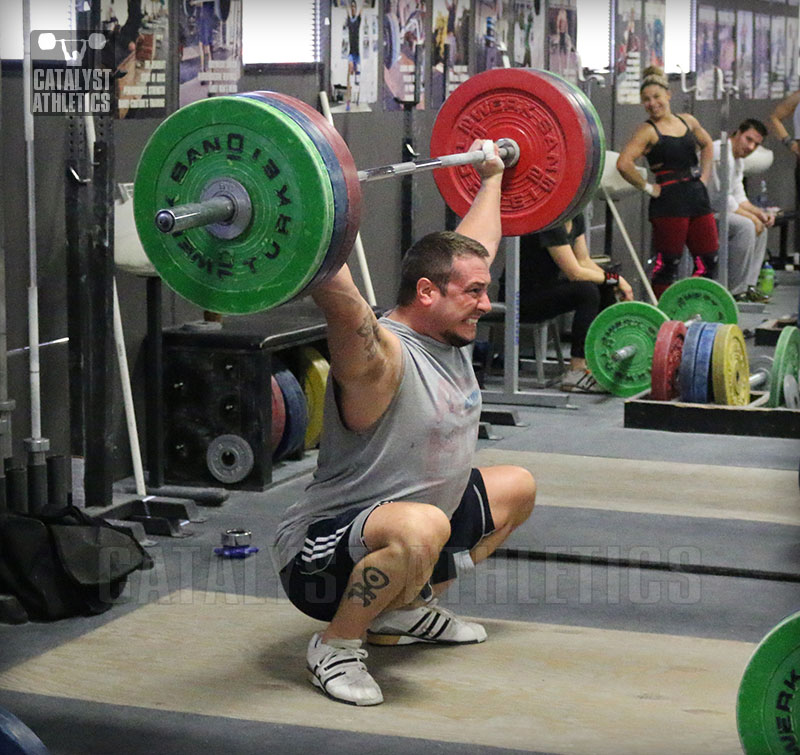 Progress
I’ll continue posting follow-up articles every week or two that contain updates on the healing, and what exactly I’m doing for rehab and training in general. At least one good thing will come of this.

Ted
Greg, I wish you a full and speedy recovery. God bless. Thank you for sharing this experience with us.

Drew Hawthorne
I'm pulling for you Greg! Hope the rehab goes well and you're back confidently on the platform soon!
Troy Obrero
Hoping for a speedy recovery, Greg!
Alicia brady
Greg I had a 360 degree Labrum tear repaired a year ago, and I'm finally back in the game lifting more than I did before I got injured. It's a long road but it is definitely possible. Athletes always make it through for some reason. Best of luck to you.
Amanda
I dislocated both of my shoulders last December push jerking, I rehabed them very slowly and do much more accessory work with them now, but I I'm pretty much back to normal now. I'll be very interested in how you rehab yours, I could have used some tips a few months ago, haha. Speedy recovery!
Tim
Best of luck Greg, and thanks for sharing your rehab program. Very helpful. I only happened to see two lifts of Nationals that morning ... both of your lifts described above. Heartbreaking, wish you the best and a quick recovery. A brutal sport, but you know that as well as anyone.
Andrew
No surgery?
Yes surgery. Labrum is torn 270 degrees around.


Greg Everett
Sean
Wow. Tough deal Coach. I wish you the very best of luck with pre-hab, surgery and rehab. I can only assume it was an inferior pole labral tear. I hope your rotator cuff is mostly intact. I'll be looking out for your updates. Stay strong.
Brendan
Best of luck with recovery. Had a complete AC separation 3 years ago as part of a motorcycle crash (tore AC and CC ligaments and the side and rear heads of my deltoid completely off). Couldn't do anything for about a year and a half and took about year to get full ROM back.

I'm in Sacramento and know a great Ortho Surgeon if you need one.

Genae
Squat jumps don't hurt? When I separated my SC those killed me!
Arm is held against my chest with my other hand so it doesn't move. These are not arm-swinging jumps.


Greg Everett
Drew
I'm 12 weeks post op for torn supraspinatus. Suggestions: 1 buy a couple of slings, they smell funky really fast especially after the gym. Throw one in the wash so you can wear a clean one. 2 Flushable baby wipes will be your friend. 3 small pillows will also be your friend so you can sleep. Good luck with everything.

Jesse Phillips
Thanks for posting your rehab work. One of my athletes dislocated on an OHS this past weekend.
Remey Dondoyano
I know you've got some tools in the box for training in general around an injury, but was there anything the surgeon and/or a PT was giving you for a home exercise program? I often wonder about "what really works"... In DPT school, we're taught of evidence-based practice guiding post-surgical rehab protocols but I don't always feel like there's much literature to speak about sport-specific rehab in Olympic weightlifting (maybe I'm overlooking existing ones).

P.S. I had a similar dislocation of my GHJ during a snatch (not as severe as yours, and the joint self reduced after several "long" seconds). Ursula P. was actually there when it happened and will remind me of the "freak accident", after which I went on to PR my CJ in training, further indicating how that narrow grip allowed more stability/less humeral translation for me. She suggested I use a much more narrow Sn grip once I felt ready to begin overhead movements several weeks later. A couple years later, I have returned to my "normal" one. I also took her suggestion on doing Sn recovery from the rack (she speaks of them in one of her articles on her Weightlifting Wise website) and eventually progressed to tolerating them from the very bottom of the squat. That drill, other than TGUs, made me feel more confident about moderate-heavy weight overhead without the apprehension I had with a full Sn movement. Hope I'm not out of turn sharing my experience, but I really am looking forward to hearing of your transition into that sub-acute phase of healing and beyond.
I'll be documenting the process in a series of articles starting with this one.

Aaron
Is there a problem with permanently substituting back squats with safety back squats?
It wouldn't killd you, but it's a considerably different movement. As long as you have a good reason to do so, it's fine.