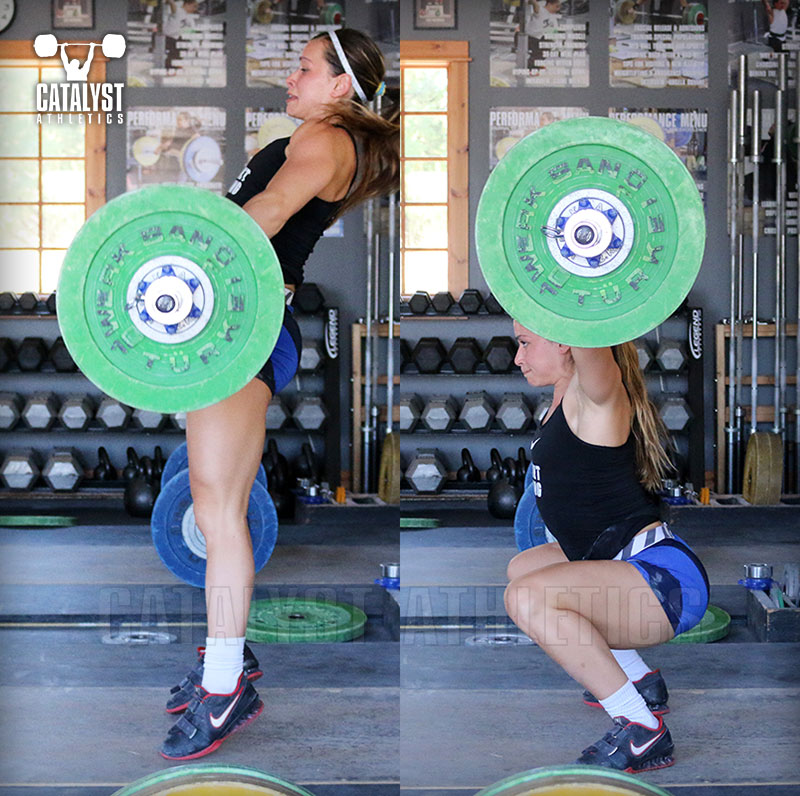 See more articles & videos like this in the Snatch & Clean Second Pull collection.
“Your confusing thesis has captured my attention; please tell me more.” –Phil Hartman as Bill McNeil in News Radio

I questioned my choice of title for this article, and then I thought about News Radio, and didn’t care anymore. I’ll just explain what I’m talking about in the article.

We talk a lot about bar paths in the snatch and clean, but typically we’re focused on the earlier phases of the pull—from the floor to the finish of the extension. Maybe I’m being overly optimistic, but at this point, I think it’s pretty well known that this should not be a perfectly vertical motion for the bar (if you’re not sure what I mean, the bar should move backward toward the lifter slightly). There are still those out there who will argue it should be vertical the whole way up—but there are also people who argue that the earth is flat.

I want to focus here on the turnover, both of the snatch and the clean. At least in the sense that we’re discussing them, they’re essentially the same—they simply have different end points.

The short and sweet of it is this—from the bar’s contact at the hip (snatch) and upper thigh (clean), it will travel forward slightly (as minimally as we can manage), and then must come back toward the lifter into the rack position or overhead position. This general notion appears to not be the problem, but the degree to which the bar needs to come back is commonly misunderstood.

The bar doesn’t need to come back just to its starting point on the floor, but actually a little farther back. We begin with the bar over the balls of the foot, and we want to receive it approximately over the center of the foot—that’s a couple to a few inches depending on your shoe size.

What I see time and again are lifters allowing the bar to travel straight up, and then leaning forward to reach for the bar with their bodies rather than bringing the bar back into position while maintaining the proper posture. In other words, in the clean the lifter moves the shoulders forward to get them under the bar; in the snatch, the lifter leans the head and chest forward to get the back of the neck under the bar. This is the exact opposite of what needs to happen.

This forward lean creates the same situation as the bar actually moving forward off the hips—the weight is in front of the system’s base. In fact, it can increase the effect even more if this leaning takes place even in part when the feet are still moving into the receiving position. With the feet unanchored on the platform, the forward lean of the upper body causes the lower body to move backward in reaction, which can easily double the effect.

I like to think of the proper motion in two ways—first, always bring the bar to you. You are the master of your destiny. Second, always place the bar directly over your feet with the correct squatting posture. This means that even if you jump backward (or forward if you’re a total degenerate), the bar-body system will still be in balance in the receiving position.

The first part of preventing this tragedy is to not allow the bar to move away from the body excessively prior to the turnover. Check out this article for how to do that.

The next part is performing the turnover itself properly. I see this as two pieces: the motion of the arms themselves to move the bar and body relative to each other, and the maintenance of proper posture. The latter is simple—sit straight down into the correct squat position with your head and chest up and your feet directly beneath you. Quit trying to invent new positions like the low bar front squat or behind the back overhead squat. If those worked, someone else would have already done it.

The motion of the arms in the turnover can be practiced with tall snatches and tall cleans, as well as muscle snatches and muscle cleans. Maybe I don't need to say this explicitly, but just in case, remenber that these exercises are not going to help you if you do them incorrectly—they’ll just help you reinforce whatever mistakes you're already making (the links for each will give you a video and plenty of explanation on proper execution—no excuses).