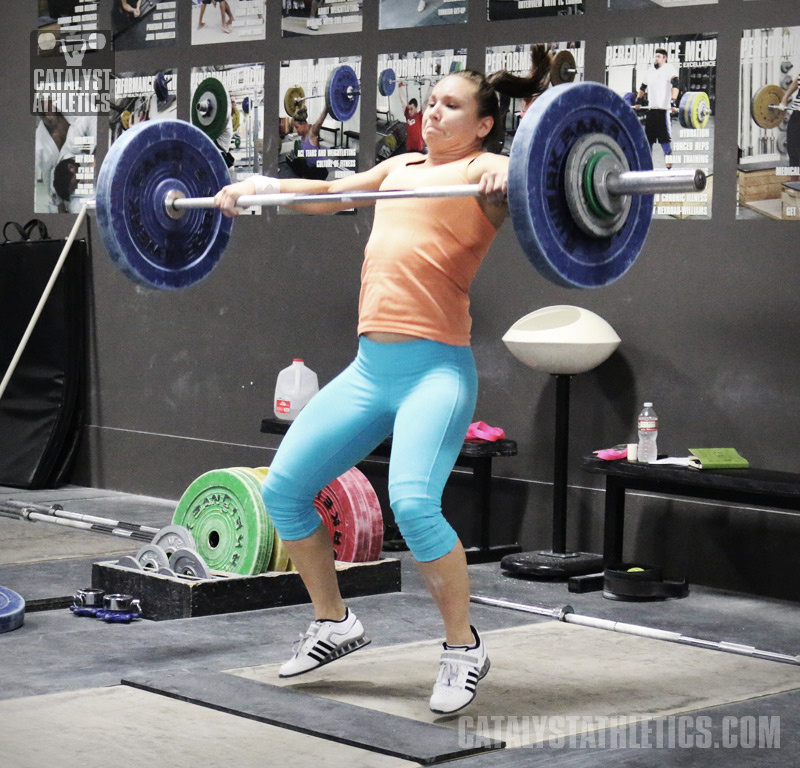 See more articles & videos like this in the Snatch & Clean Third Pull & Receipt collection.
Your movement under the bar in the snatch or clean can be slow for a few different reasons, and that will affect what exercises help. If it’s truly the pull under the bar that’s slow, it may be a strength issue, a technique issue, or a lack of aggressiveness. The following discusses the snatch specifically, but it applies to the clean as well with the exception of the overhead position.
Let’s worry about strength first. You can think of the third pull in three basic parts: the initial pull of the body down toward the bar, the turnover of the bar, and the punch up under the bar. Each of these parts can be strengthened best individually because one usually limits the weights than can be used for others, but can also be trained together with certain exercises.
For the initial pull under, it’s an issue of arm, back and shoulder strength—the ability to forcefully pull the elbows up and out. The simplest exercise to strengthen this movement would be a tall snatch high-pull. You won’t be able to use a lot of weight—it’s not a strong movement for anyone—but this is pure upper body strength in exactly the position and movement you want. You may not even be able to use an empty barbell—you may need to use a lighter technique bar or even dumbbells. Stick with 5-6 reps, 3-5 sets.
You can also do snatch high-pulls from the mid- or upper-thigh and use the legs and hips to accelerate the bar initially, then use the upper body to finalize the pull to the top position. This will allow you to use more weight as well as better simulate an actual lift. Stay flat-footed if you want to emphasize the upper body more, as this will force you to limit how much hip and leg speed you can put on the bar. To use even more weight, do snatch high-pulls from the floor with maximal speed.
To strengthen the turnover of the bar, you’ll need to use a muscle snatch or long pull variation. You can use the same kind of principles described above for the high-pull. To completely isolate the upper body movement, perform a muscle snatch from the tall position, which means you get no leg or hip at all. These will be very light—don’t make the mistake of trying to load it up or you’ll end up changing the movement, which defeats the purpose. You can add more weight by doing the muscle snatch from the hang or floor. Snatch long pulls are another good exercise for turnover strength because they keep more tension on the upper body throughout the movement.
Finally, to strengthen the punch up under the bar, use snatch balances or drop snatches. Drop snatches will not allow you to use as much weight, so if you want to load it up, do a snatch balance. These are also great exercises to improve your speed and timing in the very last portion of the third pull (which is really a push).
Strength may not be the problem; it may be technique. If you’re not moving yourself and the bar optimally, your pull under will be slower than it should be. Be sure your elbows are rotated to point to the sides throughout the first and second pulls so they will remain properly oriented upon entrance into the third pull. Don’t worry about shrugging under the bar—pull with your arms and the shrug will come along at the right time and to the right degree. Pull the elbows up and out and keep your body and the bar in immediate proximity—the bar should be close enough to smell on your way past it.
Continue pulling the elbows up even as your turn the arms over—keep tension on throughout the movement. It’s common to see lifters suddenly get slack in the system at this point, and that only slows them down and increases the chance of an unstable receipt of the bar. As you finish the turnover, flip the hands back into the proper position and punch up under the bar with a relatively loose grip. This entire movement must be fluid and extremely aggressive.
You can use tall snatches to work on the entire movement. Focus on keeping your weight back over the feet rather than shifting forward as you initiate the movement. Have someone stand at your side and make sure you’re keeping the bar and your body as close to each other as possible.
This leads to the final consideration: that your lack of speed under the bar is actually coming from earlier in the lift. Many athletes are so focused on the upward extension of the pull that they continue pulling long after it’s productive. You have an extremely brief moment when the bar is weightless at the apex of its elevation, and if you’re not already moving under the bar, you’re losing the opportunity. The moment your hips and knees reach their final extended position, you must transition your feet and pull under—the finish and initiation of the pull under should really occur almost simultaneously rather than one after the other. Consider the second and third pull together a single continuous action rather than two consecutive actions.
To work on this, you can high-hang snatches or power snatches—this will allow you to better focus on the final extension and change of direction. You can also snatch or power snatch off of high blocks (mid-thigh).
Finally, focus on being aggressive throughout the entire lift, every time you lift. You have to develop that mindset every time you train.
See more articles & videos like this in the Snatch & Clean Third Pull & Receipt collection.

James
Thanks for another great article Greg!

I recently began using 'tall muscle snatches' with no hip drive to work on this issue.
Is there a percentage of the snatch that would indicate one has reached an 'adequate' level of strength for this movement?

For example, I can use ~30% of my snatch for a set of three, strictly upper body pulling. I've just never heard of anyone using this exercise, so I have no idea where this falls on the strength spectrum.

Greg Everett
James -
I don't have a number, but 30%/3 seems like plenty to me (I don't think I could do that), so I suspect any problem you have is coming from elsewhere.
Nick
Hi Greg

With my cleans Im finding the heavier I load, the better my timing in my turnaround and racking of the barbell. When I do triples at 60% of my max Im finding that the barbell is kinda slamming down onto my shoulders. It feels like Im going under the bar and the bar is falling on me.
Closer to my max my timing improves and it feels great. How do I fix that turnaround when the weights are lighter? Is this a bit of a stupid question?! but how do I control my pull and turnaround when using lighter weights
Greg Everett
Nick -

Most likely you're trying to get into a low squat receiving position when it's not warranted. You have to stay connected to the bar and meet it wherever it is. With 60%, that's going to be high, so if you squat down as low as you can in the turnover, the bar will fall and crash on you. Turn it over and rack it as quickly as possible and meet it with your shoulders - with 60%, that will be at the height of a power clean, but you'll continue to sit into the full squat. As the weight increases, you won't be lifting the bar as high, but if you always practice staying connected and meeting the bar wherever it is, you'll move lower and lower with it and all of your cleans will be smooth.

Read this article for more specifically on the clean turnover.