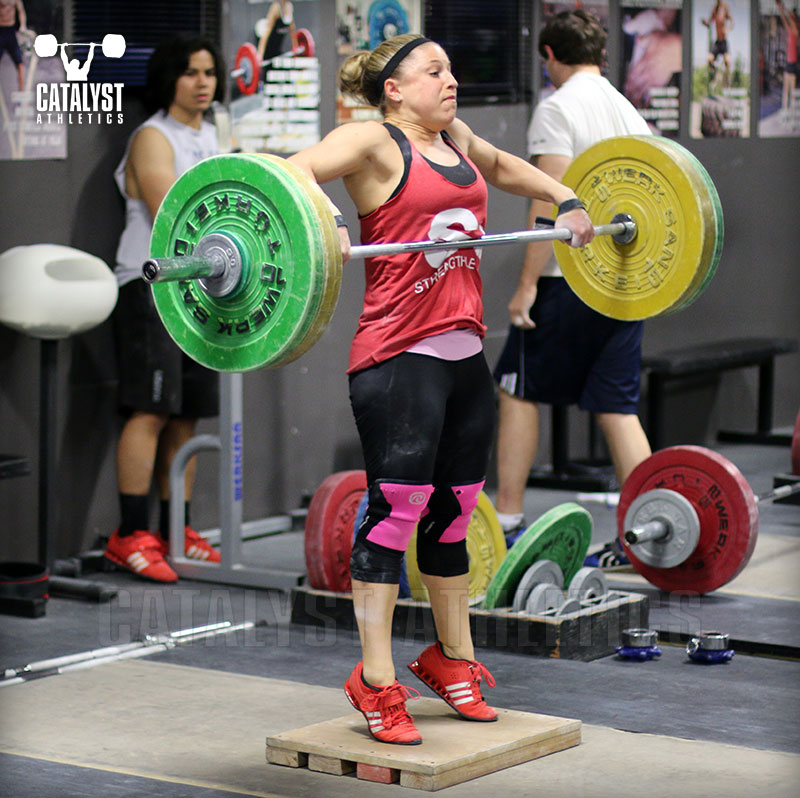 See more articles & videos like this in the Snatch & Clean Third Pull & Receipt collection.
Maybe a year or two ago, I was told by a fellow on Facebook who we can conservatively call not my biggest fan that “elbows up and out is dead” in response to a video I posted about a technique drill for the snatch in which the lifter was performing hang snatch high-pulls + snatch.

This struck me as funny for a few reasons, and this comment to me represented in many ways the current state of weightlifting thought in the US, at least online. First, it’s funny because it’s demonstrably untrue with the least bit of time and effort; second, and funnier, it likens weightlifting technique to fashion. I suppose that’s less funny than depressing, but I’m a cheerful guy.

With this topic specifically, I think there is some resistance on the part of a segment of the new generation of lifter and coach to accept it because it’s seen as being connected to “old” technique, which is envisioned as a vertical extension of the body and an intentional upward rowing of the barbell with the arms to maximize height on it (which is really a product of the fact that until the 1960s, the bar couldn’t touch the body on the way up, which precluded a more complete extension and backward angle of the body in the pull).

However, while the position in the top of the pull may have evolved considerably in the last several decades, the motion of the upper body to move under the bar remains essentially the same.

Part of the problem is also related to what I believe is widespread misunderstanding and misrepresentation of what this elbows up and out motion truly entails and looks like. For example, I’ve heard people say that it means the elbows should be directly above the bar and/or the forearms should be vertical, which would require the lifter to actually incline the trunk forward. I’ve also heard people describe the exact same elbows up and out position I teach as elbows back. This is confusing to say the least.


What Does Elbows Up & Out Actually Mean?

In reality, the elbows up and out position will place the forearms inclined backward with the elbows behind the bar, but approximately in line with the shoulders when viewed from the lifter’s side (see photo below). In addition, the third pull will begin with the lifter’s trunk leaning backward to some degree (to varying degrees among lifters), which means that if we’re looking strictly at the forearms, they’ll be angled back even more. But remember that elbows up and out uses the lifter’s trunk as the reference point, not the world around it. What we’re really saying is elbows toward the shoulders and laterally away from the body. 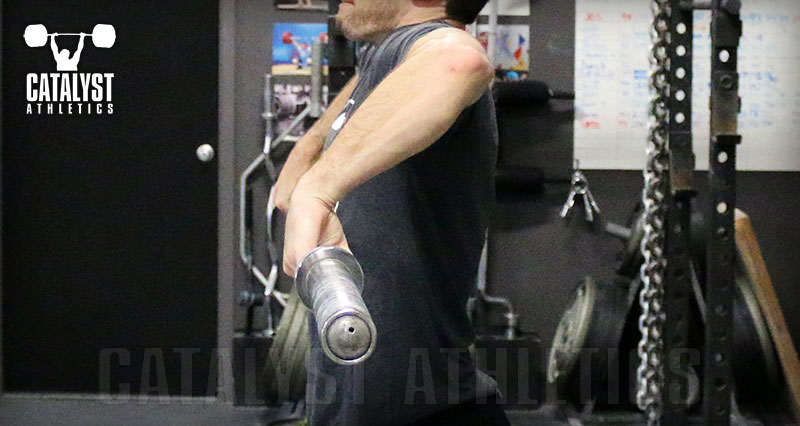 The elbows up and out position, even with optimal mobility, will still place the elbows behind the bar, not directly above it, but approximately in line with the shoulders.


If this is confusing, just picture what the elbows do to get from their initial position when the arms are extended in the pull to this position we’re discussing—they move up. Do they move back? Yes, a little bit, but the overwhelmingly dominant direction is up, which is why up is the descriptor of choice (see photo below). 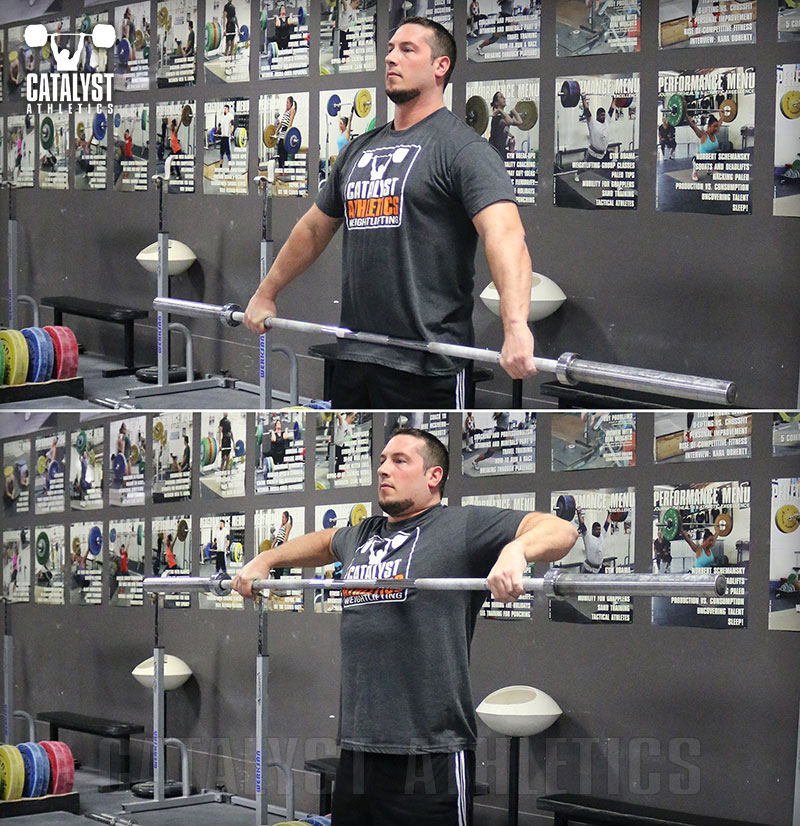 The overwhelmingly dominant direction of the elbows in the pull under the bar is up, which is why up is the descriptor of choice.


Now, does this motion with maximal elevation of the elbows occur in every lift by every lifter? Of course not; just like any other element of the snatch and clean & jerk, this motion will vary to a degree among lifters for a number of reasons. First, many lifters have restricted shoulder mobility that prevents the motion in its most complete form; second, in a snatch or clean, a lifter will rarely actually achieve maximal elbow height as we may teach and practice in related exercises and drills to reinforce the motion; third, not even elite lifters are technically perfect; and finally, some lifters intentionally pull the elbows back and in—some are able to get away with it, and some are not.

While we do generally want to execute this motion of the elbows as similarly as possible to our isolated drills for the sake of maximizing the speed under the bar and proximity of the bar and body, we also acknowledge that the motion in a snatch or clean will rarely if ever perfectly match the motion in a muscle snatch, muscle clean or high-pull. The initial motion of the elbows up and out is the most important part—that creates the downward momentum of the body, preserves the upward momentum of the bar, and maintains bar-body proximity. If the elbows then diverge somewhat from the optimal path, all is not lost.

If, on the other hand, even this initial up and out motion is not executed, we’ve created a situation in which the lifter is essentially falling down into the squat rather than actively pulling under the bar, and the relative paths of the bar and body are more likely to diverge. This doesn’t mean it’s impossible to make snatches and cleans like this—but the argument it’s possible is not historically a winner.


But the Clean is Different, Right?

Not really. It’s different in the sense that the grip is narrower, meaning the height of the elbows is going to be somewhat reduced relative to the snatch; additionally, because of the far shorter distance the bar and body need to travel, and the comparatively limited need for precision in the clean relative to the snatch, this motion is nowhere near as critical in the clean—a lifter can get away with a lot more sloppiness and still make cleans.

That said, the same elbows up and out motion will allow a more precise, solid turnover and receipt of the clean. This motion brings the barbell and shoulders into closer proximity vertically, which then allows the elbows to spin around the bar more quickly and easily.


I Swear I’m Not Just Making This Up

Thanks to the accessibility the internet provides, you don’t have to trust me on this since I’m just a stupid American coach. You’ll find this same pattern taught all over the world by elite lifters and coaches. There may be minor variations here and there, but you’re not going to find any true opposition.

Below are some photos of elite lifters demonstrating this movement pattern, and a video of everyone’s current favorite Eastern European lifter teaching the snatch and emphasizing the same pattern repeatedly.

Ultimately, like I find myself saying at the end of most of these articles, you’re going to have to find what works best for you individually. Maybe pulling your elbows back works for you. I doubt it, but it’s possible—it’s far more likely that it’s simply the pattern you’re accustomed to so anything different feels terrible. It takes time to learn new motor patterns.

If you decide to disregard this particular element of lift technique, that’s your business and I wish you well. Just don’t fool yourself into believing you’ve stumbled across some kind of revolutionary technique that crusty old jerks like me are too elitist and stubborn to use. 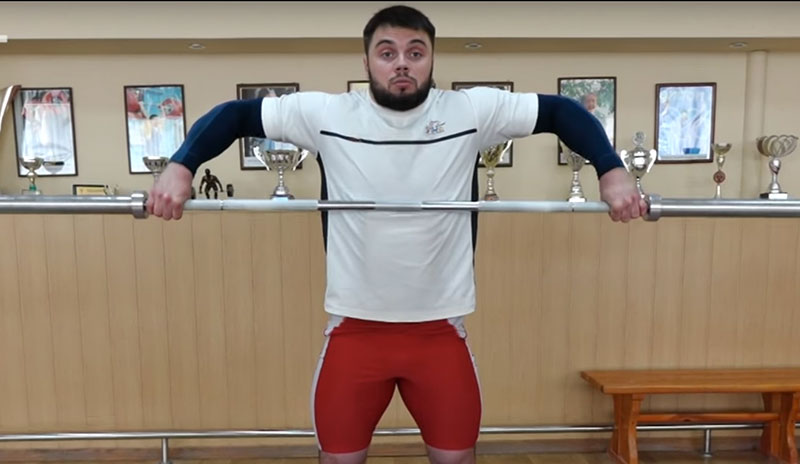 You don't have to believe me; you can believe them if you prefer.

Helio
Torokhtiy teach the "hit and catch" technique fir the snatch?!?!
Gwilym Parry
A great article, this method will result in a narrow loop at the top, followed good ballance and white lights.
Jeff
I laughed pretty hard at "I'm a cheerful guy." I mean obvi #bestpodcastever.
Nizar Kaawache
You're Greg Everett, you don't need to show us photographic proof to prove a point. Your word is enough. But I understand it's for the sake of the article. Thanks for everything, the CACWC L1 changed a lot for me and hopefully L2 would soon as well.
Randy Main
dead!? if the bar is riding the body up its a forgone conclusion that the elbows go up and out, unless you have the anatomical structure of Squidward. I'm convinced an IQtest is in order before people are allowed to procreate.