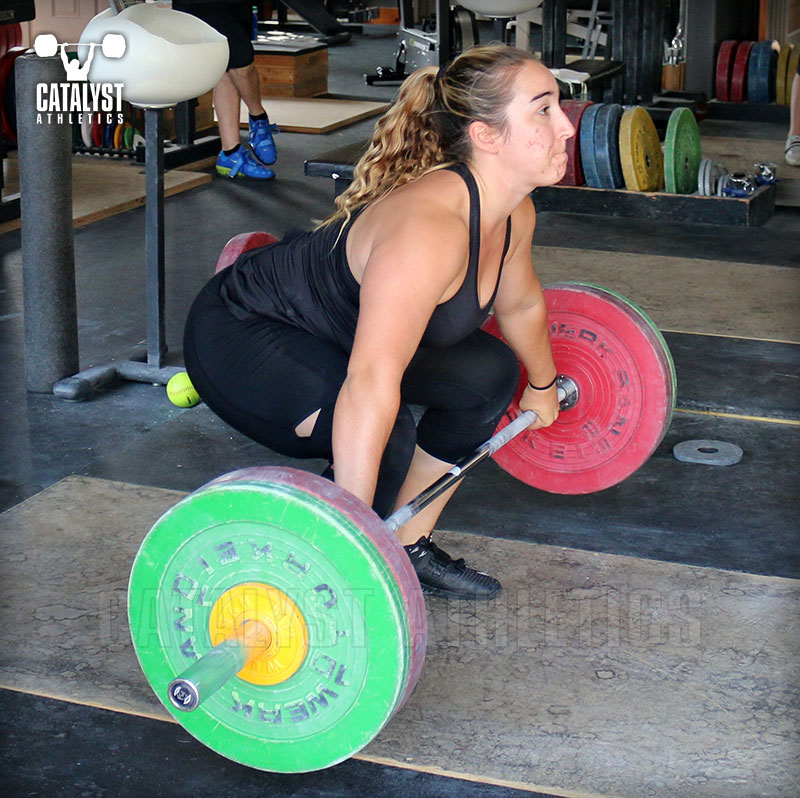 See more articles & videos like this in the Pulling Position & Balance collection.
Ryan Asks: What can I do to improve on keeping my chest up and ass down on the snatch pull as the weight gets heavier? I find myself bouncing the bar a little too hard off the hips and I now have a bump that hurts. I would appreciate any tips. Thank you.

Greg Says: There are two parts to this—first, knowing you need to maintain a more upright posture, and second, being physically capable of maintaining an upright posture. You obviously have the first part down, so we’ll focus on the second.

Except in cases of lifters with very short and strong legs (the same who are naturally strong squatters), the natural tendency of the body as it’s lifting a weight from the floor is to raise the hips faster than the chest. This is the knee joint opening to a larger angle at which its mechanical disadvantage is reduced to a point at which it can then actually move the load. The more closed the knee joint is, the harder it is for it to extend under load, so the body will shift itself into a position at which the angles of the involved joints allow the load to be moved the most easily.

The solution to this, as we’ve decided we want to lift in an upright posture rather than just let our bodies do whatever they want, is to strengthen the legs until they’re able to move the load in the position we want. In short, if you can’t maintain an upright posture when pulling from the floor, it’s due to inadequate leg strength.

To fix the problem, you need to strengthen your squats (in an upright posture) and train all of your pulling exercises in the proper posture. This may mean temporarily reducing the loading in some exercises until you can build your strength back up properly—if you continue training snatch pulls so heavy that you tip over into the position you don’t want to be in every time, that’s the position you’re going to continue to be strongest in.

Exercises like segment pulls with pauses one inch off the floor and at the knee for 2-5 seconds will be especially good at helping you strengthen the posture you want. Slow eccentrics in pulls or deadlifts are also very good, but can be harder for a lot of people to do properly, i.e. maintain the correct position on the way down, and again, if the position isn’t correct, you’re not going to get stronger in the way you need. Snatches from a low hang position (below the knee to about one inch off the floor) and floating snatch pulls are also helpful.

In your quest to strengthen your ability to maintain that more upright posture, be careful not to overcorrect. Remember that you do want to be over the bar in the pull—that is, we want the shoulders initially directly above or slightly in front of the bar, and the in front of the bar after the knee for basically as long as possible. The trick is to avoid getting pulled farther than we want uncontrollably. Halting snatch deadlifts or snatch segment pulls with a pause at mid-thigh and/or the hip will help strengthen this position. Of course you can also do snatches themselves with a pause at mid-thigh, or do complexes with a halting snatch deadlift at mid-thigh or the hip + a snatch.

There is a possibility that it’s your back itself that’s failing to maintain its extension in the pull, and this is moving the shoulders down and forward somewhat, making it look and feel like you’re tipping over at the hips. In this case, you’ll need to improve your back strength with stiff-legged deadlifts or RDLs, good mornings and weighted back extensions.

Finally, pay attention to how you’re separating the bar from the floor. If you try to rip it off as fast as possible, it’s far more likely that your hips will shoot up and leave your shoulders and the bar behind. The initial lift doesn’t have to be slow, but it has to be tight and controlled—push with your legs as if you’re going to squat the bar up rather than yanking it.