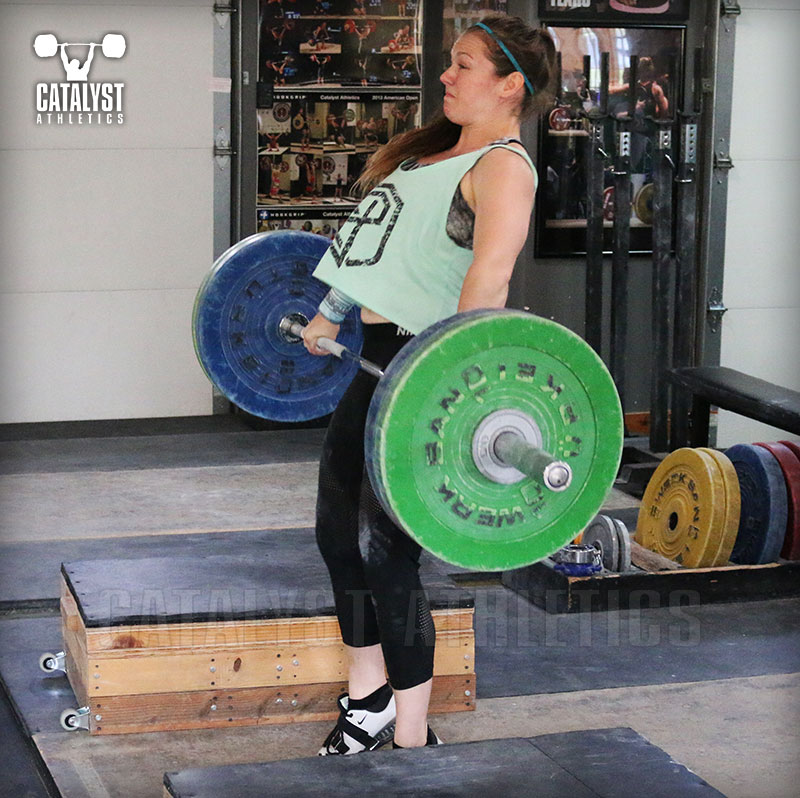 Louie Asks: As of late, I've been having issues with soft elbows in the catch when I snatch. It's almost as if the weight is crashing down on me causing me to bend my elbow (I'm assuming) and I end up pressing out the weight prior to rising or I miss the lift entirely. However, using blocks (from a high hang position) I'm able to catch solidly with locked out arms (no elbow bend whatsoever). I figure either my pull is not high enough or my speed under the bar is just not fast enough. I ruled out the weight being too heavy as I was able to snatch the %s off the blocks. Any advice would be greatly appreciated.

One of the keys of good snatching and cleaning is to remain connected to the barbell throughout the third pull—that is, rather than pulling it as high as possible and then dropping down indiscriminately under it, actively pulling yourself under the bar specifically, wherever that may be. Generally you’ll be able to pull a bar higher from the floor than from high blocks, which explains why you avoid such crashing from the high blocks—your low receiving position is appropriate for the bar elevation you’re getting off the blocks, but is too low for the elevation you’re getting from the floor.

The first step in fixing the problem is the conceptual understanding that you need to stay connected to the bar and meet it in the third pull at whatever height you’ve lifted it to. The next step is training to support that concept.

For this, two basic complexes are helpful: power snatch + snatch or hang snatch + snatch, and variations thereof, such as power snatch + hang snatch. The power snatch + snatch complex should be particularly helpful in your case. When performing the complex, your primary concern should be securing the bar overhead at the same height in the snatch that you did in the power snatch. It’s the same weight, so you’ll be able to turn it over and fix it overhead in approximately the same position in both reps—the only real difference is that in the second rep, you’ll continue seamlessly to sit into full squat depth rather than putting on the brakes and holding it in a high position.

The hang snatch + snatch complex is similar, but the receiving height will be lower. The purpose in this case is to focus on staying connected to the bar in the turnover and meeting it at the correct height, which is easier to do from the hang than from the floor (as you’ve discovered). Then in the snatch that follows, you can attempt to mimic the movement from the hang.