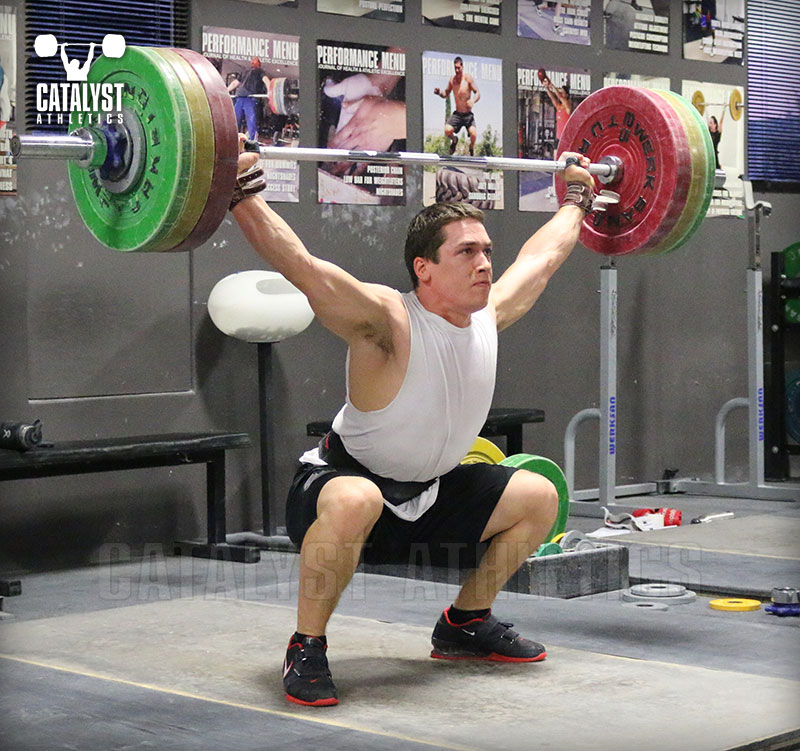 See more articles & videos like this in the Overhead Position collection.
When an athlete has difficulty supporting the bar overhead in the snatch, it's natural to immediately assume there is insufficient strength and to address the problem with strength work. While this may often be the problem, or at least one part of it, there are other elements to consider that may be preventing the athlete from properly using what may be adequate strength. In some cases, these problems can be corrected very quickly and save everyone a lot of headaches.

When it comes to supporting weight overhead, proper structure is the most important element. Strength is required to reinforce that structure, but we're not relying on muscular strength directly. The ability to lockout the elbows in the snatch or jerk is extremely important, and this can be easily demonstrated. Press a weight overhead and stop just short of elbow lock; when you begin to fail, lock the elbows completely and you'll find you can suddenly continue holding the weight. This is why individuals without the ability to completely lock the elbows are at a huge disadvantage in the sport, although there have been world records set by lifters with very poor elbow extension.

By creating the proper structure to support the bar, we maximize the potential of our strength. In the snatch, we can look at a few things. First, we need to create a solid foundation, which is the shoulders and upper back in this case. The shoulder is an extremely mobile joint, which has its advantages clearly, but also means there is a lot of potential for unwanted movement and instability. In order to create a solid foundation at the base of our structure, the shoulder blades must be fixed tightly in a position that prevents movement, allows the arms to rise as needed to the bar, and allows positioning of the weight and body to maintain balance over the feet. This can be achieved by completely retracting the shoulder blades and allowing them to upwardly rotate enough to open space for the humerus. I find the easiest way to accomplish this position is to imagine pinching the top inside edges of the shoulder blades together. This is not a shrug, although the upper traps will contract and bunch up.

The elbows must be locked out; in other words, they will be extended to the end of their range, which will normally be slight hyperextension. This creates the bone lock described previously and allows the muscles of the arm to support much more weight than they could directly. The elbows should be squeezed into extension directly rather than finding some indirect cue to encourage their extension. For example, many athletes have been told to pull the bar apart or something similar; I don't like these kinds of cues for a couple reasons. First, in order to pull the bar apart, you have to grip it tightly; a tight grip on the bar will limit how well you can extend the elbows. Second, I find this attempt makes it more difficult to secure the proper scapular position, and without this, the rest falls apart. That being said, if an athlete thinks of this cue and does what he or she is supposed to do, I won't argue about it.

This brings us to the hands. The bar should be in the palm slightly behind the centerline of the forearm. The hand and wrist should be allowed to settle in so the wrist is extended; do not try to hold the wrist in a neutral position. Again, if the bar is in the proper place in the hand, this will not place undue strain on the wrist, because it's not way behind the wrist as some mistakenly hold it. However, the proper hand and wrist position does require a good deal of mobility, which should be worked for diligently to allow the athlete to hold the proper positions as quickly as possible. If the athlete is flexible enough, the hook grip can be maintained overhead, but the grip must be relaxed to allow the hand and wrist to settle in properly.

The bar should be positioned over the back of the neck or the top of the traps with the head pushed forward through the arms somewhat. If the head is straight up or tucked back as some try to hold it, the shoulder blades cannot be held in the proper position and the arms cannot be oriented well to support the weight. However, be cautious of pushing the head too far forward, as this will encourage the chest to lean forward excessively, which will in turn degrade the integrity of the overhead structure.

The width of the grip is another factor to consider. Ideally the grip can be such that the bar contacts the body in the crease of the hips. However, due to variations in body proportions, this can occasionally create problems elsewhere. The wider the grip, the more likely a lifter is to over rotate and drop the bar behind during the turnover of the snatch. Additionally, as the grip gets wider, it becomes more difficult to extend the elbows forcefully. A balance needs to be found between proper bar positioning during the pull and the ability to support and stabilize the bar overhead.

Finally, overhead instability can arise from the lower body entirely at times. Most commonly this is due to inflexibility, but can also be due simply to improper positioning. Most obviously, if an athlete has insufficient range of motion in the ankles and hips (or thoracic spine), he or she will not be able to establish a sound, upright squat, and as a consequence, he or she will not be able to establish the ideal overhead structure described previously. This may be because the trunk is forced to incline forward too much, the weight of the entire system is out of balance forward, or likely a combination of the two. Adequate flexibility throughout the body must be a priority for all lifters.

Spend some time investigating your or your athlete's overhead problems with the above information and see if you discover anything unexpected. The better you can diagnose the problem, the more quickly and easily you'll be able to correct it.


See more articles & videos like this in the Overhead Position collection.

Red Kettlebell
Please check out 'Heavy Lifting, No Rest, Candy: the Bulgarian Method' in The Wall Street Journal tomorrow.
Whitney Richtmyer
Article linked to excerpt: "U.S. weightlifters haven't won an Olympic gold medal for 40 years. Now they're hoping the Bulgarians can bring them success. Ivan Abadjiev, who lead their national team to multiple championships, is bring his "Bulgarian Method' to a new academy in Danville, Calif."

Uh, yes they did. They won an Olympic Gold medal at the Sydney Olympics in 2000. Tara Nott...

T
I have a winged scapula on my left side which is making overhead stability near impossible. Going to see a specialist soon.