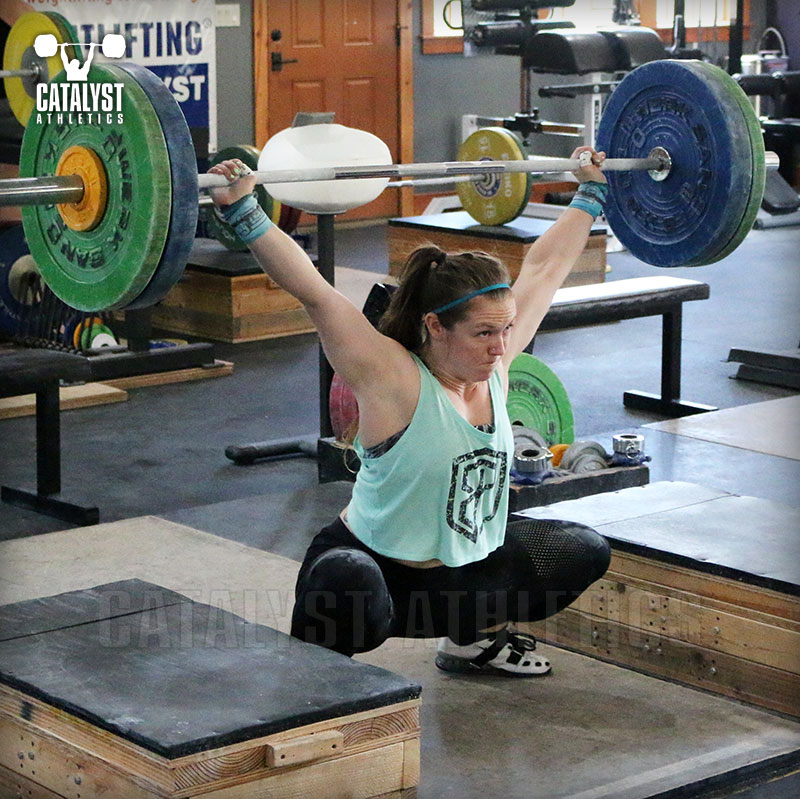 Training from the blocks in Olympic weightlifting is always an interesting subject. I’ve seen lots of different philosophies on them. Some lifters never use blocks and don’t even have a set in their gym. Others use them all the time and love them.

Personally, I’ve never been a big believer in them, but I acknowledge their usefulness in certain situations and I understand many high-level programs incorporate them in their training. It’s one of those, “I don’t like them myself, but I know others do…and that’s cool.”

Let me give you a little warning tip about blocks. Like I said, they can be useful and productive. But they can also create a specific problem in a lifter’s technique, and that’s what I want to share with you.

Doing a lot of lifts from the blocks can sometimes make a lifter start jumping forward in the snatch and clean. I’ve seen it happen plenty over the years.

Please make a mental note right at the beginning that I said this happens SOMETIMES…not ALL the time. Many people use blocks regularly in training without developing a jumping forward habit. True. However, some lifters (especially new and intermediate ones) can fall victim to it.

I think it understand how it happens. As we all know, using blocks creates a situation where you’re starting the snatch or clean from a higher level than the floor (above the knees, below the knees, etc.). Because you’re starting the lift from an elevated dead-stop position without the momentum you’d have if you were pulling from the floor, you have to generate a ton of power to execute it. This is the main reason people use blocks. They’re trying to build more snap and pop into their technique.

But this is where the problem can develop. Some lifters generate that initial pull from the blocks by shoving their hips WAY TOO MUCH FORWARD and NOT ENOUGH UP, often pulling their shoulders back simultaneously. They’re doing this because they’re not strong enough in the legs and hips to drive the movement in an upward direction if they don’t have that momentum they’d get in a pull from the floor. We all know the hips have to move forward and up into the bar to master the snatch and clean. But if the forward part is happening too early and too dramatically, the lifter is most likely going to jump forward during the turnover.

NOTE: If you’re new to the sport, jumping forward is generally considered a technical flaw that you should try to eliminate. There are some elite lifters that have had a lot of success despite having a jump forward in their technique (like Kianoush Rostami and a few others from Iran), but they’re rare. If you’re a developing lifter, you want to try as hard as possible to avoid it.

Obviously, this problem can come from two main places: 1) The lifter is using too much weight in their block lifts.  2) The lifter isn’t being instructed properly on how to stay over the bar and move in an UP direction.

Now let me address a couple of questions/objections that might be popping up already:

2) There are plenty of lifters who use blocks regularly and don’t jump forward.  Correct. I already acknowledged that. I’m not saying this is something that happens 100% of the time.

All I’m saying is this…if you’re a lifter or a coach and you use blocks in training, just keep an eye on it. Like many technique problems, it can happen without you even really knowing it.

Blocks are fun. People like them because they’re different, and new/intermediate lifters can often lift more weight from the blocks (or from the hang) than they can from the floor. So the excitement gets carried away…which usually results in more weight getting loaded on the bar.  As I said, this is often where the problem originates. They want to get that heavy bar moving, so they ram their hips forward and stretch their shoulders backward to initiate something. Nothing is moving up towards the ceiling, so they have to jump forward just to try to weasel under that bar, almost like a bullwhip. Just stop and visualize this whole thing for a second. You’ll see how it could happen.

I’m not saying they’re bad and I’m not trying to get you to avoid them. I’m just advising caution and a keen eye if you use them.

Justin Escalante’
Love these articles! I’ve definitely experienced what you were describing with throw your hips toward. This will be a good thing to keep in mind next time I use blocks.