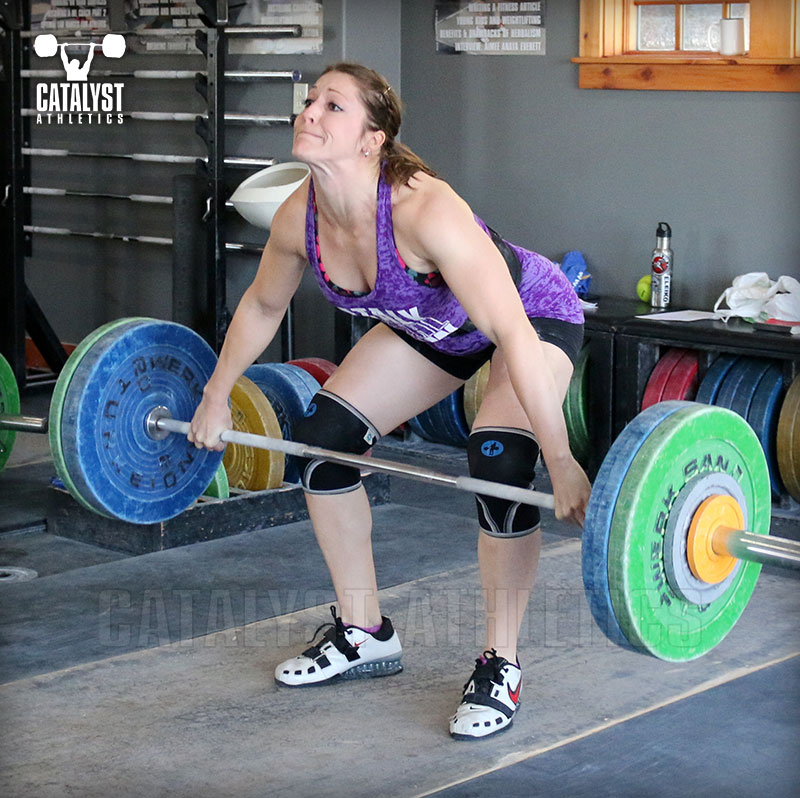 See more articles & videos like this in the Snatch & Clean Starting Position & First Pull collection.
I’ve said before that the complexity of the first pull is commonly underestimated by new lifters because of its apparent simplicity, especially in comparison to the rest of the lift. However, it simultaneously seems to be made more complicated than it needs to be by more advanced lifters and coaches. How the bar and knees interact with each other in this phase of the lift is critical, but I think we can simplify the process here and free up some brain space to worry about more important things.


Getting the Knees Out of the Way

The first problem is that there is this pervasive idea that you have to “get the knees out of the way,” as if they’re actively attempting to obstruct the bar’s path and you need to battle them for dominance. One of the first things I make sure to point out when working on the first pull at seminars is that, conveniently enough, there is an inherent mechanism in the first pull for moving the knees back—standing up. You physically cannot execute the first pull of the snatch or clean without the knees moving back, even without any direct intent to do so.

What complicates this is an improper starting position, opening the hips prematurely, rocking too far back to the heels, and other technical errors that alter the position of the shoulders and bar during this phase. Let’s clear these things up.

Think of the first pull as a squat—hold onto the bar and stand up.


Set Yourself Up for Success

There are a few criteria for a proper starting position: barbell over the balls of the foot, knees pushed out to the sides inside the arms, knees slightly over the bar, and shoulder joint directly above the bar. In most cases, this is more than enough to avoid any problems getting past the knees.

Pushing the knees out effectively shortens your legs—with the hips at a given height, the more the knees are moved out to the sides, the less they reach forward over the bar. The limit of this outward movement is the arms—don’t go bananas and starting pulling your snatches and cleans sumo. The knees should be in light contact with the insides of the arms in your starting position. Conveniently enough, in the snatch, in which your hips and knees will be bent more than in the clean, your grip is also wider, providing more space for your knees to move out.

The barbell should be positioned over the balls of the foot (the metatarsophalangeal (MTP) joint)—where your big toe attaches to your foot. This means that in many cases, the bar will not be in contact with your shins in your starting position, and that’s fine—it doesn’t need to be, although if there is significant distance, something is probably off. If you’re really short, you’ll likely be able to start the bar a little farther back over the foot, and if you’re really tall, you can start it a bit farther forward over the toes. In any case, if you start it in the right position, you’re naturally creating some space for the bar to move up and in as the shins move back with knee extension and avoid collisions.

Finally, if your shoulders are positioned correctly relative to the bar—joint directly above it—you’ll be fine. If you start behind the bar, you’ll be pulling the bar back into your legs the entire lift, hitting the knees.

Think of the first pull as a squat—hold onto the bar and stand up. This will help you avoid a lot of the common mistakes seen in the first pull. The big one to focus on here is maintaining approximately the same back angle on the way up until you initiate the second pull. In other words, all that should be happening during the first pull is your legs extending (yes, the hips are extending too, but there is no net extension—the shoulders are not moving back).

There will nearly always be some change in the back angle—we don’t have to be insane and tape a protractor to ourselves, but the goal is to minimize it. The taller and longer-legged you are, the more of a shift you’re going to experience. Again, though, you need to work on minimizing it by strengthening the ideal pulling posture and practicing. There is no need to lean way over the bar as you lift from the floor unless you’ve started in a poor position. I’ve coached two 6’ 4” lifters, one long-legged and one short-legged, and both could maintain a constant back angle in the first pull, so if you’re 5’ 9”, I don’t want to hear it’s impossible.

Keep the knees pushed out as they were in the start until the bar is past them, and then allow them to move into their natural position. There’s no need to push them out farther during the pull—if you find you have to in order to not hit your knees, it’s because you either started incorrectly or are pulling the shoulders back too soon.

If you begin extending the hips too early, i.e. you fail to stay over the bar long enough, you’re going to drag the bar back into your legs and likely hit your knees. Understand that this is totally different from not getting your knees out of the way—you’re pulling the bar too far back. Your knees aren’t doing anything wrong, it’s the rest of you that’s ruining everything.

Also be sure to avoid over-extending the knees early in your pull. Some lifters will attempt to nearly completely straighten the knees by the time the bar reaches them—this is way too much too early. With the bar at knee height, you should still have at least some forward inclination of the shin and bend at the knee because you should be able to continue standing while staying over the bar until the bar is higher on the thigh. If your shins are vertical by the time the bar reaches the knees, you’re forced to begin extending the hips, and this is too early.


Dialing in the Movement

We can discuss the concepts all day, but it’s a lot easier to just practice the movement to understand how this all works (or should work).

First, dial in your starting position. Get someone to take a photo of you from the side so you can see how you’re actually positioned—it’s often very different from what you feel—and make adjustments to meet the criteria I outlined here and in the linked starting position article.

Next, start practicing the proper motion from the floor to the thigh. This is best done by isolating this phase of the lift and slowing it down. A nice slow speed means you have time to actually feel your balance and position and then make adjustments to correct problems.

My favorite exercise for this purpose is the segment deadlift or pull with pauses at 1 inch off the floor, at the knee, and at mid-thigh. Here are your self-checks for each position, which you’ll be holding for 2-3 seconds:

The floating deadlift or pull on a riser is a good one for naturally getting you into a better position. Use the riser so you can start at exactly the same level you would if pulling from the floor. This exercise will really give you the feeling of squatting the bar up.

Finally, use slow-pull snatches and cleans to focus on position and balance in the first pull while starting to integrate your newly developed proficiency into the lifts themselves.

Justin escalante
This was very helpful, thank you! The standing up like it’s a squat makes so much sense and makes it easier to understand.