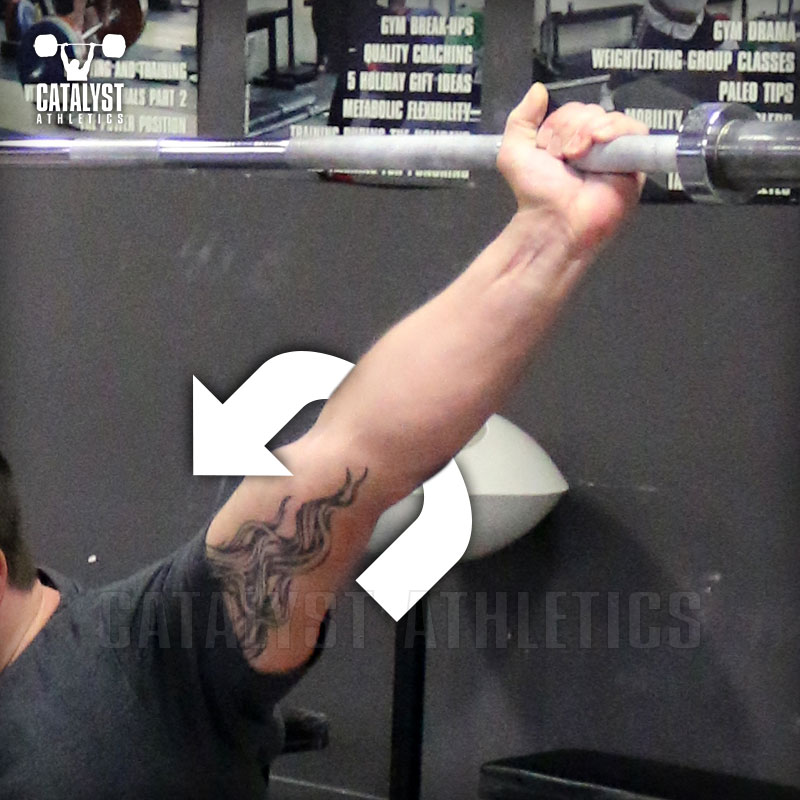 OK, I’m going to wade all the way into this filthy mess. I’ve written about the overhead position, including the proper orientation of the arms, many times for many years, but it seems that because these things were not entirely dedicated to this specific topic, people still don’t know where I stand on the topic, and because I’m not Chinese or Eastern European, I’m often considered an idiot if I don’t completely agree with what they say.

First of all, we need to clear up the terminology, because I’d argue this is the source of the latest round of confusion and argument (similar to the double knee bend fiasco). As it turns out, the internal rotation position everyone is losing their minds over as some kind of foreign secret that cures all ills isn’t different from what I teach… only the description is. I’m going to explain not only what the position is, but also why I choose the terminology I do instead of internal rotation.


What Is Internal Rotation?

In anatomical position, internal rotation of the arm is the rotation of the humerus (upper arm) at the glenohumeral (where the arm bone meets the shoulder blade) joint forward/down. The easiest way to picture it is that you’re rotating your arm so that the palm faces backward (ignoring independent movement of the lower arm that moves the wrist/hand beyond the upper arm). 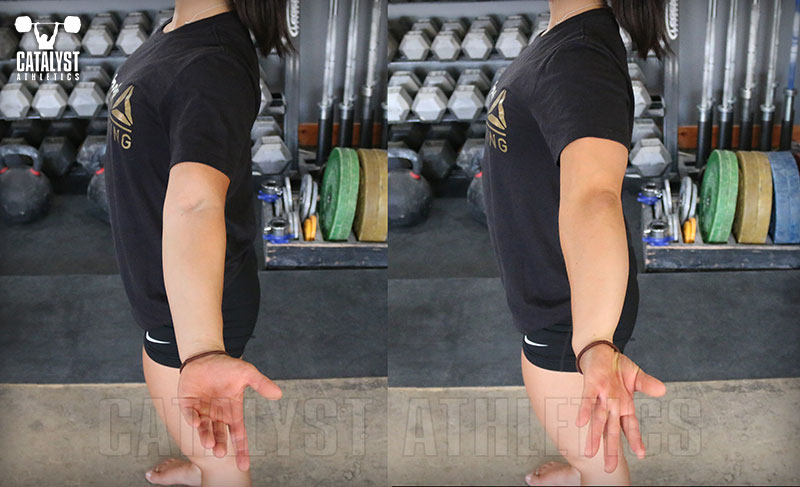 If you lift your arm up over your shoulder to an angle approximating where it would be when holding a snatch overhead, the positions are similar, but you’ll find a reduction in end-range internal rotation (further reduced as you move into a jerk overhead position). Good mobility will get the palm pretty close to backward still, but it’s unlikely you’ll get it past that even if you can with the arm lower. 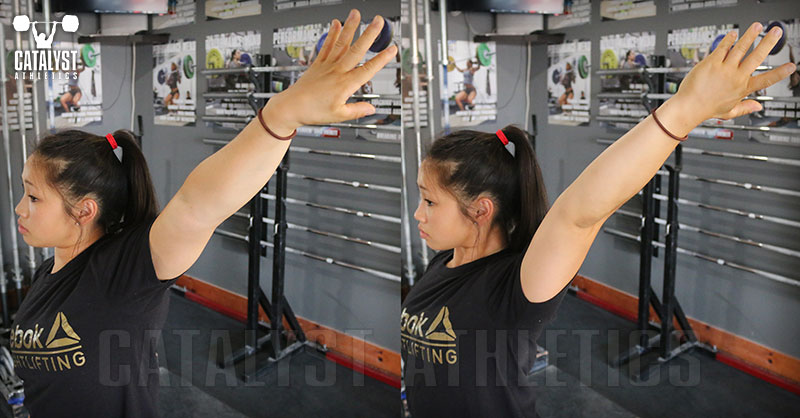 Now to complicate things further, when you add a barbell to the overhead position, the range of internal rotation is reduced further because the hand is largely fixed in place by the bar and the lower arm can only rotate at the wrist and elbow so much to allow continued rotation of the upper arm. How much it’s reduced will vary among athletes based on mobility.

We need a clear landmark to observe the degree of IR/ER in a person because we can’t feel the position of someone else’s body—I choose the bony point of the elbow because it’s obvious and it won’t change with hand or wrist motion. The crook of the elbow opposite of it (the antecubital fossa) is also good and often necessary to use because it’s more visible from the angles we tend to observe lifters from. Another good way to see it is the line of the bicep which aligns with the antecubital fossa, i.e. whichever way you see the bicep facing, the inside of the elbow is facing the same way. 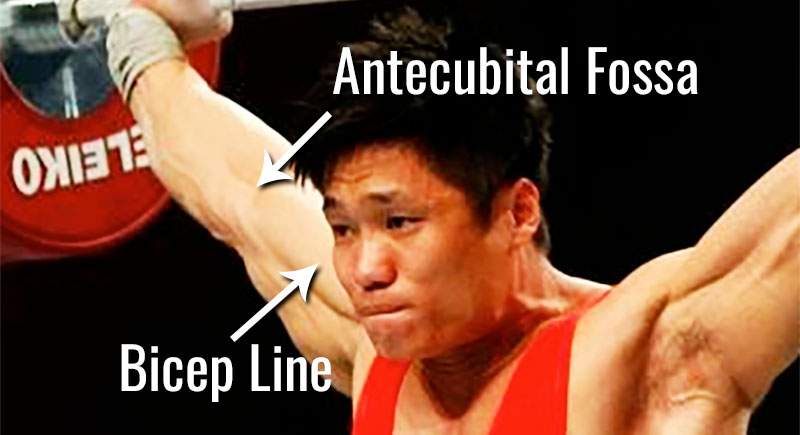 Landmarks to help see the rotation of the arm. You don't need the bony point of the elbow pointed out... I hope.


What Position Do The Best ACTUALLY Hold The Bar In?

Do you see why I don’t like using the term internal rotation? It’s hard enough to communicate ideas to people without unnecessarily vague terminology.

Fortunately, these days data are easily obtained from Coach Google. You can likely find a photo or video of any lifter in the position you want to see with very little effort.

I’m using Chinese lifters specifically because they’re the most frequently referenced with regard to the internal rotation debate. Look at the photos below of three Olympic caliber Chinese lifters holding snatches overhead—how are the elbows oriented? Compare it to the previous photos of end range internal rotation. You absolutely cannot claim their arms are fully internally rotated, not even to the limited end range possible with a barbell—because they’re not, and it’s obvious if you know what internal rotation is.

Elite Chinese lifters demonstrating the ideal orientation of the arms overhead in the snatch. Is that actually internal rotation? Hint: Nope.

Someone can tell you what to do, but if your understanding or interpretation of it, or even their intended meaning, doesn’t align with what even they themselves do in reality, you need to take a step back and figure out what’s actually going on. If you believe elite Chinese lifters know how to properly hold a snatch overhead (I’m pretty confident they do), you need to rely on observable, incontrovertible fact, i.e. what these lifters actually do in practice… not vague descriptions on Instagram, especially from people removed multiple times from the source. 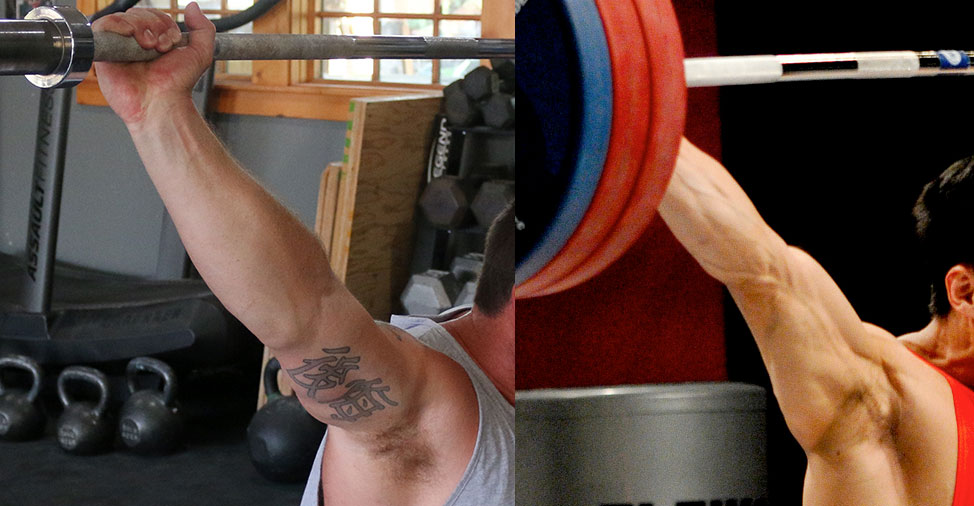 Before someone posts a photo of some elite lifter with more internally rotated arms (or even more externally rotated arms), let me add this: lifters aren’t perfect, and especially when we’re using competition lifts as evidence, there’s greater chance for divergence from “ideal” because lifters are pushing their limits and more likely to execute lifts less than perfectly. It’s not uncommon to see a lifter unintentionally internally or externally rotate the arms out of the ideal position while trying to save a snatch—it shouldn’t be a surprise that compensation for a poorly executed lift isn’t a good example of proper lift execution.

Additionally, keep in mind that a lot of lifters have injuries, mobility restrictions and anatomical peculiarities that influence the details of any position. You can find elite lifters with arm orientations that diverge from the optimal as shown and described here. Exceptions to the rules when it comes to the human body don’t disprove the rule by any means—they prove how much the body can adjust and compensate for limitations and less than perfect anatomy. Lifters will vary somewhat it their optimal positions, but all will conform to the basic description I provide.

Also… don’t show me a photo or video of some famous lifter demonstrating extreme internal rotation at a seminar… Look up photos and video of that lifter actually snatching big weights in their prime and you’ll find a position similar to what we’re talking about here.


So Let Me Be Clear

What this all boils down to is that what I teach for the overhead position doesn’t actually differ from what’s used by the best lifters in the world. What differs is the way in which it’s described.

For over ten years, I’ve described the correct position in the same way: orienting the bony point of the elbow approximately halfway between straight down and straight back—or you can think of it as the inside of the elbow pointing about halfway between straight forward and straight up. With a bar overhead in the snatch position, this is about mid-point between end range internal and external rotation, hence my calling it “neutral”. Might it be a few degrees off of the exact mid-point? Yes, there’s a good chance. Let’s all settle down—we’re not landing a rover on Mars. We don’t need laser measurement and calculus to establish a secure overhead position.

Compare the photos below of my demonstration of this position in my book and the execution of the position by one of the best lifters in the history of the sport. It’s the same thing. What I call neutral, others call internally rotated. I believe that description to be inaccurate, confusing and misleading, but I agree with the position itself as you can see below.

No difference in arm orientation between one of the best lifters of all time and your slightly chubbier, weaker author.


I don’t want maximal internal rotation or maximal external rotation—both have their own problems. The neutral position I describe helps to keep the shoulder blades retracted and upwardly rotated, keeps the arm connected solidly to the scapula, orients the elbow so it isn’t directly aligned with the force trying to flex the joint, and places no undue strain on the structures of the shoulder. What more can you ask for in an overhead position?

Note: If the pictured position IS full internal rotation for you... it's because you have extremely limited shoulder mobility. We can't define anatomical positions according to your peculiar ranges.

Some of you get what I’m saying, some of you get it but still think I’m a dick, and some of you think I’m just a stupid American who can’t figure out weightlifting to save his life and will disagree with me no matter what I say. One of you even told me I was a piece of shit for not explicitly calling out CrossFit for teaching external rotation overhead, which seems a little emotional for a discussion of weightlifting technique to me.


8 Comments
Janis
Hi Greg,
Sorry to hear that people are giving you hard time. I’m been following your coaching method since day 1 and getting better at weightlifting every day. Many thanks!
Best wishes,
Janis

Adam
My first oly seminar was CrossFit Weightlifting. We were told to show our armpits and turn our elbow crease up and they did use the words externally rotate. I struggled with this position for some time and had a constantly sore shoulder. Fast forward, went to. Torokhity seminar was taught to internally rotate, squeeze the shoulder blades together and elbow crease forward. Game changer for sure, no more sore shoulder, better receiving position for me and yes, more kilos.
Whatever works for the individual, if turning the elbow crease up works for an athlete, great.
JORGE
Great article! I have had some discussion about this with some coaches here in Brazil, that teach whatever they learn in a 2-day/week seminar, or Instagram videos, instead of actually reading and using common sense!
Julien
Ooow now I get, I just thought some elite people (Thoroktiy) were just internally rotating everything but that's not it ! Thanks !
Ingrid
Greg,
Thank you for sharing your knowledge and awesome coaching experience. The content you produce is always high quality and expertly explained. Keep doing what you are doing...there are those that greatly appreciate it no matter how "controversial" a topic may be.
Brett Stahl
Awesome article, loved this final paragraph..."I don’t want maximal internal rotation or maximal external rotation—both have their own problems. The neutral position I describe helps to keep the shoulder blades retracted and upwardly rotated, keeps the arm connected solidly to the scapula, orients the elbow so it isn’t directly aligned with the force trying to flex the joint, and places no undue strain on the structures of the shoulder.
Thank you for making us (those of us willing to learn) better coaches.
Sonny
Love your stuff! Took 1 year off and did Catalyst online only to become better at weightlifting. I find your source material to be the most consistent, and the most humorous. Please keep being a dick! And fuck CrossFit. 10 years of that crap and I’m out.
Michael
My God, this was an eye opener. I'm a beginning weightlifter (3 months give or take), struggling with the beginnings of shoulder inflammation because I've been actively internally rotating. It's starting to nag my tendons, I feel impingement.
I can't believe how foolish I've been, not actually recognizing that all the footage of these olympic athletes I've wachted don't corroborate the idea of thoughtful internal rotation at all!

Thank you so much!