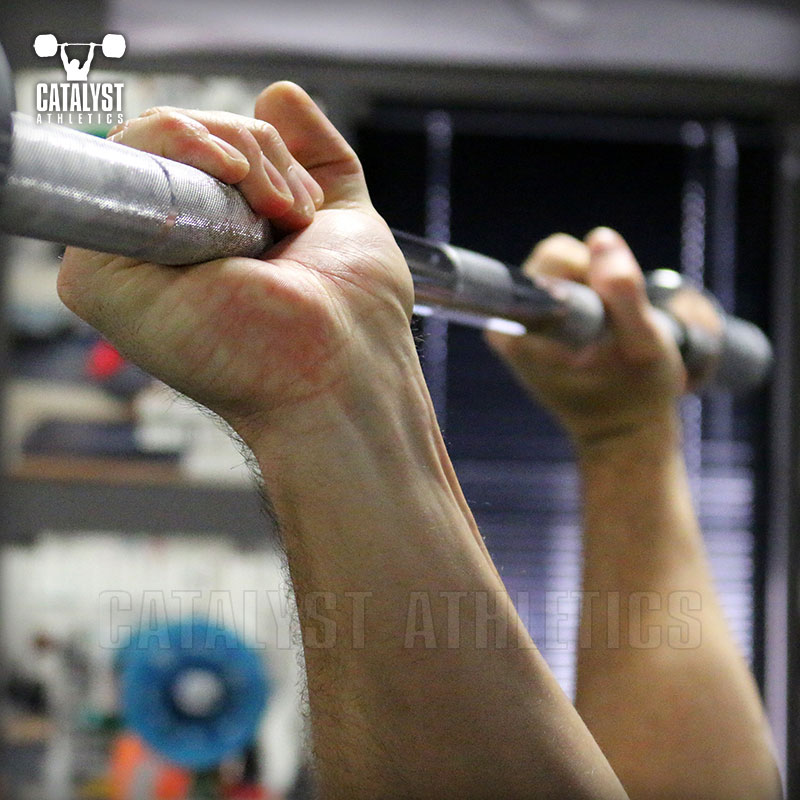 See more articles & videos like this in the Overhead Position collection.
Most of the focus with regard to the overhead position of the snatch and jerk is on the shoulders and elbows, justifiably so due to the importance of their positioning and frequency of incorrect positions among lifters. Often overlooked are the positions of the hands and wrists—but their importance shouldn’t be underestimated.

Before we go further, it would make sense to clarify what the hand and wrist position needs to accomplish even if it may seem obvious in a least a vague sense: Some athletes will achieve these things completely naturally if you put a bar in their hands and tell them to hold it overhead; unfortunately, these athletes are relatively uncommon. For everyone else, there are myriad combinations of poor previous instruction, fear or concern about certain positions, influence of mobility restrictions in the shoulders or thoracic spine (and even ankles and hips), and any number of other factors that can create some surprisingly odd configurations.

The analogy I like to make is that we essentially want to mimic the cradle and post of a squat rack with the arm and hand. In other words, we have a strong post and a secure spot for the bar to rest in directly above it. Hold your arm in front of yourself, cup your hand into a U shape (fingers and thumb are the vertical lines and your palm is the bottom) with your thumb in close to a straight angle with the forearm, and that’s your basic starting point (see photo below). You should notice that the wrist is extended to angle the palm back, but that the crotch of the hand is over the forearm, not behind it as you would see with extreme wrist extension and a bar placed too far toward the fingers. 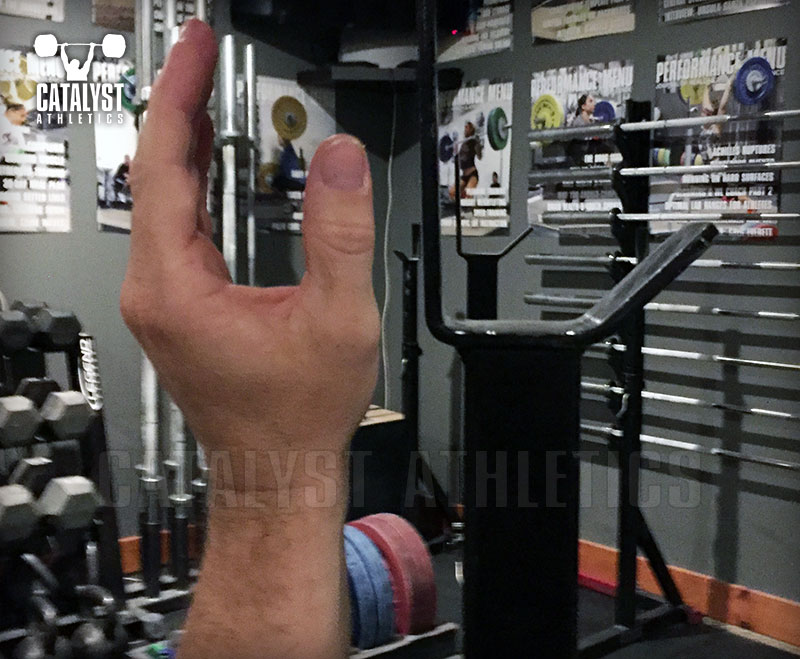 This is the basic position we’re aiming for, which meets a few pretty simple criteria: You should be able to hold a bar like this without gripping it tightly—if you have to choke the bar to maintain control of it, your position is incorrect. Excessive grip tension means tension in the elbow flexors, which means slowed and limited elbow extension—obvious problems in the snatch and jerk. Grip the bar only as tightly as necessary to maintain control—the proper amount of grip tension will also help maintain the correct position of the hand and wrist (e.g. preventing excessive wrist extension).

In the snatch, you can maintain the hook grip through the turnover and into the overhead position only if you can achieve the proper position overhead. The ability to do this is more common in women, who tend to have more slender hands and fingers, better mobility, and are lifting on barbells with smaller diameters of their thicker-barred, stiff, sausage-fingered male counterparts for whom the hook grip will typically prevent the hand and wrist from settling into the correct positions. The latter will need to learn how to properly release the hook grip during the turnover.

The position of the barbell relative to the forearm is important for its stability. By placing it over the forearm as opposed to farther bar toward the fingers in an extremely extended wrist, we lose the strength and rigidity of direct support, and you’ll begin seeing a lot of softness in the entire overhead position (elbows and shoulders) as a result. By placing the bar very slightly behind the midline of the forearm, we maintain the direct support but gain a little more stability as the bar will always tend to shift in one direction—rather than being equally prone to move forward or backward if perfectly centered. Again, this is very slight—the bar remains in the palm and above the forearm.

Some new lifters have been taught to hold a “neutral wrist” overhead (back of the hand in line with the back of the forearm). Typically as athletes progress this corrects itself to some degree because the impossibility of maintaining a neutral wrist with significant weights becomes quickly apparent. But with lifters who are still lifting light enough weights to pull it off, you’ll still find it results in a great deal of instability. First, the position is one that needs to be supported and controlled by muscle action overwhelmingly, which means more strain and more movement; with the proper position, the hand and wrist can rely on bony and ligamentous structure for rigidity and stability. Second, a neutral wrist places the bar too far forward relative to the arm. Finally, most athletes eventually find a neutral wrist position, at least with a snatch grip, to be painful.

I once commented at a seminar that immobility in the ankles can create wrist and elbow pain and one attendee giggled, assuming I was making one of my incredibly dry jokes that people at my seminars are generous enough to laugh at. However, the rationale is fairly straightforward. Any lack of mobility in the lower body prevents the upper body from achieving the correct position, which prevents the arms from achieving optimal position, which will then force compensation in the positions of the hands, wrists and barbell—most typically, a barbell placed too far back toward the fingers with an excessively extended wrist and far more force on it due to the extended lever arm created by the rearward placement of the bar.

Finally, keep in mind that with all things related to body positions, there will be variation among lifters. Some will be the product of limitations and their consequent compensations, such as more wrist extension and more rearward bar placement to account for poor mobility elsewhere; some will be the product of massive weights that at some point for some lifters exceed what can be controlled and will simply force the hand and wrist into their most extreme positions in which support is created by bone; some will be unable to maintain the ideal position under less extreme weights because of a serious lack of wrist and hand strength; and some will simply have anatomical peculiarities that result in a somewhat different position creating the optimal setup for strength and stability.

Use the above guidelines as the starting point and goal, and adjust as needed to account for legitimate needs. For variation caused by correctable issues, get correcting—work on mobility, strengthen the hands and wrists, and practice the correct position with intent.


See more articles & videos like this in the Overhead Position collection.

David Mikel
Is it optimal to maintain the hook grip for the jerk?
David - No, you should only use the Hookgrip in a pulling movement, so you do not need to keep it for the jerk.

Alyssa Sulay
Jason
As a tall lifter, I have to use the whole length of the barbell for snatch. The inner collar always ends up jamming into the base of my palm in the overhead position. Is this normal for the grip width or am I letting my wrist go too far into extension?
Even if it's slightly narrower than ideal, you need to keep your hands inside the sleeve flanges enough that they don't disrupt the sleeves from spinning. I'm having a hard time picturing what you're describing, but it sounds like you're definitely beyond this point. If it's an issue of the hands sliding out so that they're partly under that flange, you need to keep your grip better as you turn the bar over. The amount of extension shouldn't be the issue - no amount of wrist extension is going to move your hands out under the flanges if your grip isn't too wide already.

Greg Everett
Marti
Do you have training techniques to strengthen the wrist in the snatch? to help with prevention of extreme wrist extension
Primarily you need to hold the bar correctly. If you do, there won't be such a long lever arm pulling the wrist into extreme extension in the first place. On top of that, you can do wrist curls and jerk supports with 10 sec holds, never exceeding a weight that allows you to hold the proper position.