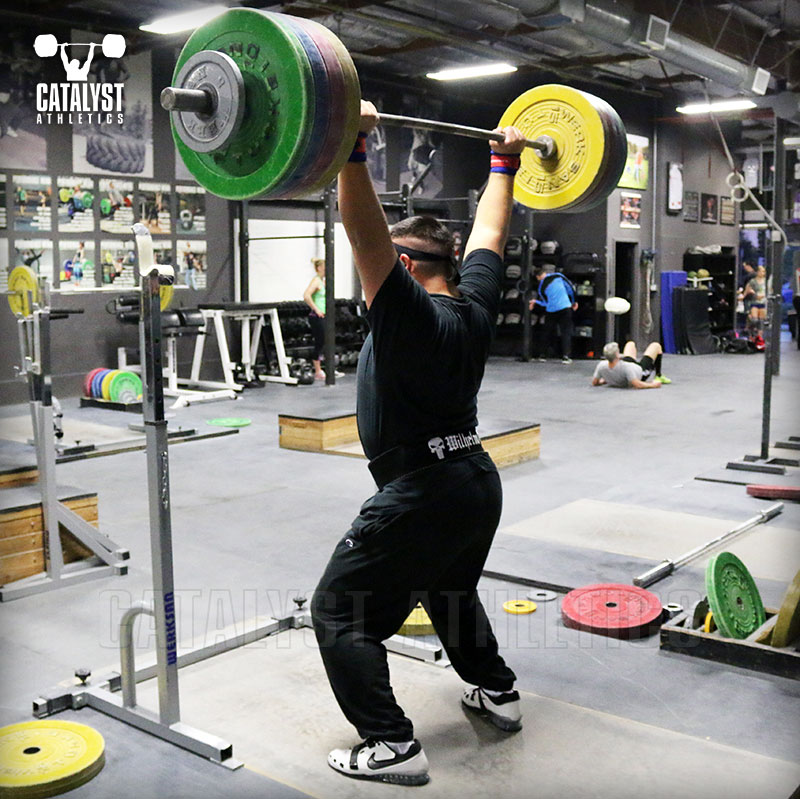 The explosion of masters weightlifting in recent years has brought thousands of new competitors to the sport. And many of them are crusty old people with bodies that won’t totally cooperate with the Olympic lifts. People are “getting bit by the iron bug” and making the decision to fully commit to it, despite physical roadblocks that basically don’t allow them to do the full classic competition movements we see on the platform at the World Championships.

As athletes, we need to develop a mental outlook that refuses to take no for an answer when it comes to our ability to do the sport. For example, let’s say you’ve got really lousy mobility that basically makes it impossible to hit an effective, safe bottom position in the snatch. You try and try, and your coach does all the right things to get you down there the right way, but it just won’t work. However, you want to be a weightlifter more than anything and you refuse to give it up.

At that point, you need to explore your options. There are basically two: power snatch or split snatch.

Right away, there’s a negative gut reaction because you know these aren’t perfect-world solutions. There’s a good reason why you don’t see power snatches or split snatches at the Olympics. They’re less efficient movements that won’t produce the same kinds of weights as full bottom position squat snatches, in a perfect world.

During the early years of my weightlifting career, I used the basic SN/C&J movements you normally see in the sport (full squat bottom position snatch and clean, and a split jerk). This is the way almost all competitors in the sport do the lifts. Nothing complicated about it.

However, disaster struck in 1999 and I was forced to make a pretty drastic change. I dislocated my knee and partially tore my ACL that year. Obviously, it was a major injury. I decided not to get surgery, thinking I could continue lifting if I let it heal and used the right kind of physical therapy/strengthening exercises.

After a year of healing and rehabilitation work, I made a comeback. My knee had recovered enough to snatch and clean just fine, but the problem was (no surprise) the jerk. I could only jerk around 85% of my old max. Before I got injured, I had a 185 kg C&J (with a split jerk). When I came back, I could only jerk up to 160ish kg before I just couldn’t handle anymore. The joint stability simply wasn’t there, and my knee would basically give out whenever I tried anything heavier than 160. I gave it everything I had and tried for a long time, but I just couldn’t get it all back.

However, I found that power jerks (or push jerk, whichever name you prefer) didn’t hurt my knee at all. I knew I couldn’t power jerk as much as I used to split jerk, but I also knew the power jerk would protect my knee, and I wasn’t ready to throw in the towel. So I decided to make the switch and just give it a shot.

I wound up hitting a 172.5 kg C&J (with the power jerk) a few years later. I was able to put that together with a 145 kg snatch, which gave me a 317.5 kg total. This was well below my career-best total of 335, but it was a hell of a lot more fun than giving up and quitting because I couldn’t split jerk anymore.

If you’re forced to resort to a partial movement in the SN or C&J, like a power clean, split snatch, or power jerk… keep your mind open to the possibilities instead of just chucking it all and jumping ship because you can’t do perfect full movements like everybody else. And I’m not just talking about situations like mine, where injury changes everything. I’m also talking about situations where your personal physical limitations just won’t allow full lifts.

Listen… we all know you’re not going to make the Olympic Team with a split snatch or power clean. But we have to remember that most of you aren’t in a position where the Olympic Team is a realistic possibility anyway. Let’s say you’re a 42-year-old woman who’s starting the sport, and you can’t hit a bottom position in the SN or C&J. So you’re completely discouraged, shrieking out, “Goddamn it!! If I can’t do a full snatch, I’m never gonna beat Mattie Rogers!!”

At this point, I think it’s probably a good idea to take a big step back and rearrange your thoughts about the world. Mattie Rogers could get hit by a car fifteen minutes before the meet starts…and she’d still beat you. You’re focusing on the wrong things. You should be focused on one simple question:

“Even if this change isn’t perfect, will it allow me to keep lifting?”

If the answer to this is YES, then you know what you have to do. Make yourself the best damn power snatcher you can be. Work on it. Develop it. Have fun with it.

Remember how I told you I had to switch to the power jerk because of injury? I forgot to mention that I medaled in the American Open two more times and qualified for the Olympic Trials after the switch. It wasn’t a perfect situation, but I fought hard and made the best of it… and some big things happened. Don’t be surprised if you wind up with the same story. This sport has a crazy way of working out for people who simply refuse to surrender.

Rolf Thorson
For a Masters Lifter, the answer is obviously to find out what sport they are coming out of. Even if they haven't competed in a while, the previous sport with dictate the technique they will use. A hurdler or jumper might be more inclined to use the split technique while others might find the squat versions more usable. Every time you write an article we get a another dose of you jacking yourself off instead of actual, useful examples.
I had an old guy show up at my gym one day. He had not competed since 1980 in track and field, yet had been doing Olympic Lifts with a broom stick, then a PVC pipe with milk jugs filled sand for weights, in his KITCHEN. The split technique suited him better since he WAS a hurdler and triple jumper, thus was used to having one leg going forward and the other planting.