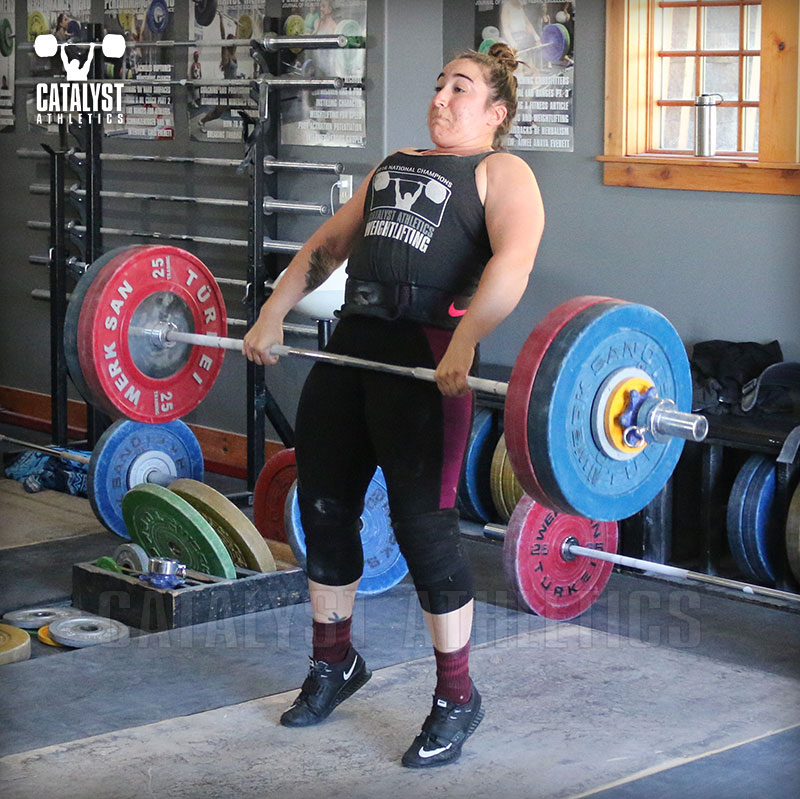 When it comes to the snatch and clean & jerk, there are approximately infinity details you can consider. As a new lifter, or even a new coach, it’s overwhelming and intimidating, and it’s easy to make the mistake of getting ahead of yourself with the newest fun detail you’ve picked up from your favorite social media account or website.

So let’s stomp on the brakes momentarily and regroup. When I wrote the first edition of my book over 10 years ago, I threw in a line, almost in passing, We need to understand now, and throughout the learning process, that there is a simple order of priorities: Position, movement, speed, load.

I obviously understood this to be true, but I’m not sure I really appreciated how important it was until later down the line. Or maybe it didn’t need to be underscored then as much as it does now with people having access to more information that doesn’t necessarily fit clearly into their present point in the progression, or that distracts them from the fundamentals with its novelty.

To quote Bill MacNeil from News Radio, “Dave, maybe in the future children will learn to drive rocket cars before they can walk, but for now let’s focus on the fundamentals.”

We’re all in a hurry to get to the fun stuff—to BE really good at weightlifting—so we want to train like more advanced lifters than we actually are. While this may seem intuitively to be totally sensible—if you want to be a really good lifter, you should train just like really good lifters—it’s actually counterproductive.

Those elite lifters you want to emulate didn’t start out training the way they do now. As a great example, I know a former East German weightlifter who explained that as kids, they performed tens of thousands of reps with a wooden stick. They didn’t just jump right into the same training program as the experienced senior age lifters—they built the foundation broad and strong before continuing.

So let’s look at what this means in a practical sense when it comes to movement.

Position is the first priority because it’s the foundation of everything else you do—it’s the most basic element of any motor skill. Starting positions and receiving positions, for example, can alone dictate the success of a lift. More importantly, positions are the boundaries and checkpoints of a movement. You cannot perform a correct movement from or to an incorrect position, because it would be, by definition, a different movement.

This means that when learning and training a movement, don’t be in a hurry—take the time to establish your starting and ending positions well. Hold that starting position a few seconds before you move; hold that receiving position a few seconds before you stand or drop the bar. This tiny bit of time is a small investment that will pay enormous dividends—it will give you a chance to make adjustments and to really familiarize yourself with what the correct position feels like, and that means the ability eventually to quickly recognize and correct an improper position without thinking about it consciously.

Movement requires correct positions—think of it as simply stringing together an enormous series of incrementally different positions. This is why people love the apps on their phones to watch themselves in slow motion and trace bar paths—they can see these intermediate positions more easily to evaluate their precision.

When learning and practicing a new movement, perform it relatively slowly initially when possible. Like holding a position, this allows you to actually feel what’s happening—you can feel where the tension in your body is, what the bar is trying to do that you have to prevent, how your balance is negatively affected if you don’t move properly, etc. Many of these things are impossible to notice if moving at full speed with a very light load such as an empty barbell or PVC pipe—no matter how poorly you snatch a PVC pipe, it will never pull you out of balance, for example.

This is partly why my snatch, clean and jerk teaching progressions use so many abbreviated movements along the way to create the complete lift—these allow focused, controlled learning of a specific portion of the lift at relatively low speeds in most cases. Not all motions or segments of a motion can be performed slowly—however, you can build the base with slowed motions.

Clearly the Olympic lifts must ultimately be performed at high speed. However, maximal speed is pointless if the motion being performed quickly is incorrect—it’s like throwing a 100 mph pitch straight into the stands. No one cares how fast your missed snatch was.

Speed often masks technical mistakes right up until the weight is too heavy to get away with them. Introduce speed once a decent level of proficiency in a movement is achieved. No, I don’t mean you have to do everything slowly for 6 months… this should be within a single training session. That said, continue returning to reduced speed lifts, segments or drills as needed to improve your fast lifts. For example, perform these slower movements as part of your warm-up for a training lift until you’ve reached proficiency in that lift.

Adding weight to any movement is always the last step. Loading develops strength, and strength is very position- and motion-specific. Strengthening poor positions and movements is the best way to make progress as difficult as possible. In that case, not only do you have to learn and ingrain a new skilled motion, you have to overcome competing motor patterns that are cemented in nice and snugly. Then even if you can perform a given motion well without much loading, as weight increases, you’re going to revert back to the poor patterns because they’re what your strength is able to support. It doesn’t matter how hard you try to keep your chest up in a heavy pull if your body can’t physically keep it up.

Be smart about your strength work—often people are so terrified of not getting stronger, or losing their strength from another sport, that they refuse to reduce weights when needed to move correctly. This just reinforces the problem and takes them even farther away from success—this is akin to continuing to walk down the wrong trail for miles because you’re scared of losing progress… except that progress isn’t even toward you goal and you’re going to have to turn around eventually. The sooner you do and get back onto the right trail, the sooner you’re going to reach your goal.

Keep the process as simple as possible. Build a solid foundation before you start overwhelming yourself with details. Don’t be afraid of backing up when you need to—it will save you time and effort in the long run.

Jord Gabriël
Thanks for the great article. anybody has a geat app for seeing yourself in slow motion/ seeing your barpath?