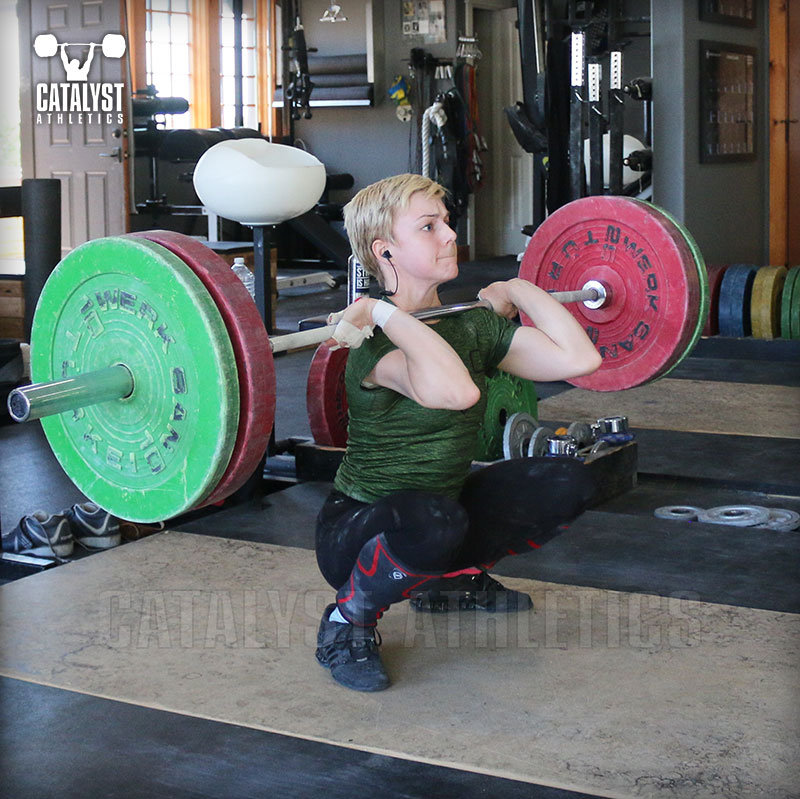 I hope many of you are chuckling after reading the title of this article. That means you already know what I’m going to say and it gives you some devious pleasure.

Ever had another lifter blow right by you shortly after they start the sport? Let me give you an example. Let’s say you’ve been training for two years and you’ve got a personal record snatch of 85 kg. You started out snatching 50 kg, and you’ve worked your way up to 85 through sheer effort and determination. You’re proud of yourself because you’ve busted your ass and made a ton of progress.

Then a new person joins your gym. This person walks in like all newbies do, confused and intimidated. You’re one of the veterans, so you have a slight attitude of superiority. Until the newbie snatches 90 kg after six workouts. They haven’t even learned technique yet and they have no idea what the hell they’re doing… and they blast right by your top numbers.

Those are the things we’re supposed to do. And we try. But we struggle, because it pisses us off so bad when this happens. We paste fake smiles on our faces and say the right things, but we really want to scream F###!! and kick a hole in the wall.

You’ve had this happen, right? Whatever your personal record weights are, you’ve seen a newcomer walk into the sport and annihilate your best lifts while they’re still in the learning process. It’s a fairly common occurrence in weightlifting.

And that’s why I’m bringing you a message of comfort. Here it is:

No matter how talented an athlete is, no matter how easily they beat you, no matter how much early success they have… the lifting gods are going to make them suffer down the road. They might have been blessed with tools you don’t have, and they might get all the glory right at the beginning. But this sport is going to kick them in the face just like everybody else. You can bank on it.

Massive god-given ability doesn’t buy you a free pass from Weightlifting Pit of Hell. You know that place, right? It’s where you spend a time period dealing with frustration, injury, doubt, stagnation, pain, and… frustration. It might last a few days, or a few weeks, or a few months, or a few years. If you haven’t been there yet, you’re obviously new. Keep lifting. You’ll have to serve your time at some point.

I’ve been on both ends of the equation, and I’ve seen it from both sides. In the early part of my career, I got to be the one who rained on a few parades. I was talented and I progressed quickly, leaving plenty of experienced lifters in the dust. It was fun. A lot of people were telling me how much potential I had, and it felt great.

And I’ve also felt the sting of being on the receiving end. In 1996, I had been training for six years and I snatched 142.5 kg at the American Open. I was proud of myself, and I knew that was big weight. Then I watched Shane Hamman snatch 157.5 kg at his first meet shortly afterwards. I think he had been training for less than a year at the time.

Did I hate Shane because of that? No, of course not. First of all, Shane was one of the nicest guys in weightlifting, so it was impossible to hate him. Also, it was obvious that he simply had more talent than I had. That’s nothing to hate somebody over.

Plus, Shane had to pay his dues too. He obviously came into the sport with a blaze, but as his career continued, he went through the highs and lows just like the rest of us. He and I were the same age and we lifted on the national scene for the same years, so I saw his road. He had a ton of success, but he also had injuries, bad meets, setbacks, etc.

Listen, I’m obviously putting some silliness into this article. You’re not supposed to be angry and resentful towards somebody because they can clean and jerk more than you. It’s not normal or productive to think like that. The larger point I’m trying to make is that it’s very easy to get discouraged in this sport. Sometimes it happens because you’re wasting your energy on other people. You look around and see lifters who are having more success than you, and it can get to you inside. You develop a crappy attitude towards your own lifting because of them. Hell, you might even think about quitting.

This is the one of the worst mental traps you can fall into as a weightlifter. Before you know it, you’ve lost your own enthusiasm and hunger because you’re disheartened over somebody else’s accomplishments. That’s a terrible place to be, but it’s not uncommon.

For some reason, it often makes us feel better when we know even the best lifters in the world sometimes struggle. One of the best things I’ve read in recent years was an interview with Chinese coach Yu Jie. He’s the personal coach of Olympic champions Lu Xiaojun and Liao Hui. In the interview, he was asked, “Have you ever lost faith in your athletes?” His response was: “I never lost faith in my athletes. Both had rock bottoms in their respective careers and were facing difficulties at one point or another. In 2005 at the Chinese National Games, Liao Hui ended up with no total. He failed all three clean and jerk attempts and lost his self-confidence. I needed to put the focus on his technique in the snatch. Then, spotting his weaknesses, working on it and improving his results gave him a strong will to continue. An option is of course giving up, but when you see the potential of these athletes, you have to make them believe in what they are capable of. We had to overcome these obstacles and get back to the platform as a team.”

Liao Hui is a world recorld-holder and Olympic gold medalist, and his coach is describing a time when he lost all confidence in himself because of a bombout. Coach Yu had to mentally rebuild him from it. See what I mean? The weightlifting gods shower failure on all our heads, and it’s completely normal to get discouraged when times are rough.

What are you supposed to do in these times? “Overcome these obstacles and get back to the platform,” like Coach Yu said. It’s a lot easier to do this when you understand you’re not the only one who goes through tough times. We all have to do it sooner or later, so don’t beat yourself up too bad when it’s your turn.