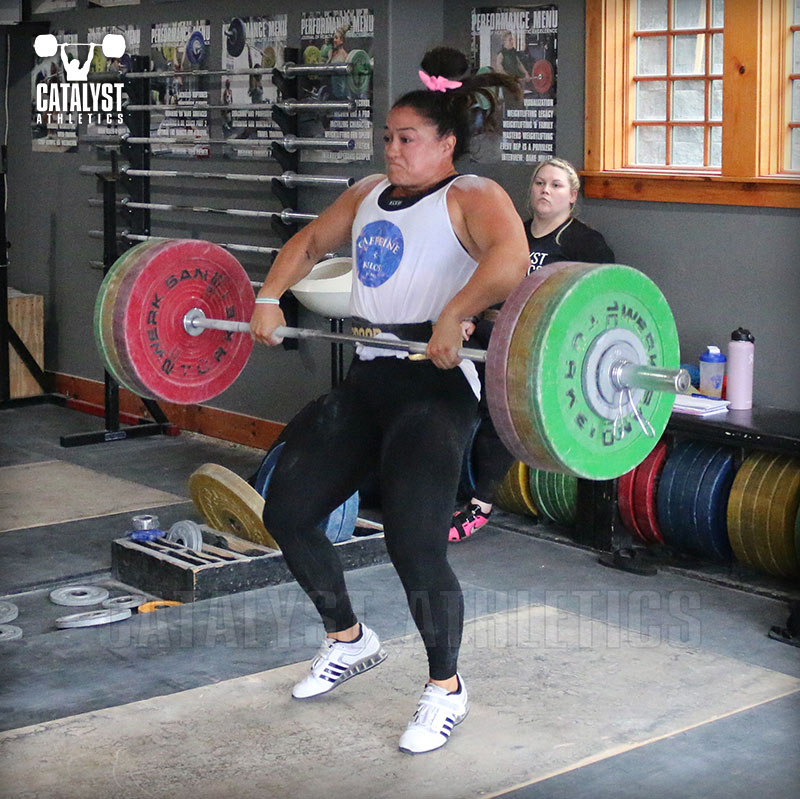 The short answer is pretty simple: All you have to do is execute the lift as effectively as possible, and that means doing what works best for you, not anyone else.


Pulling & Receiving Positions
Moving the feet from a narrower pulling stance to a wider receiving stance is the most common approach because it works best for most people. However, the two foot positions technically have nothing to do with each other. Each is a function of your proportions, mobility, comfort, and technical style, not its relationship to the other.

If your most effective pulling stance is wider than your strongest and most stable squat stance, then those are the positions you should use; likewise, if the two stances are the same, then the feet don’t need to change widths when transitioning under the bar.

Lifting The Feet
Lifting the feet clear of the platform and reconnecting them flat during the pull under the bar—even if the receiving stance is identical to the pulling stance—has the benefit of ensuring maximal possible acceleration down because of the complete absence of resistance against the ground momentarily. However, it also creates an opportunity for more dramatic misplacement of the feet, usually too wide or too far back.

Sliding the feet out instead of lifting them completely requires more precise movement and timing, and can limit downward acceleration, but if the desired movement is minimal, it can make it easier to avoid misplacement. It can also make it somewhat easier to absorb the downward force of the bar because the lifter is connected to the platform sooner.

Not moving the feet at all may be a legitimate technique, but it’s more often a symptom of a technical problem such as failing to produce adequate leg drive at the top of the pull or initiating the pull under the bar prematurely. This is most commonly seen as a lifter moving the feet in lighter lifts and then failing to as the weights increase—this change indicates it’s neither intentional nor desirable, but rather the result of being unable to execute the lifts with consistent technique because of strength and power limitations that don’t allow an optimal pull finish, or a lack of confidence that inspires a rush to move under the bar.

If you keep your feet on the floor, be sure it’s a conscious choice and executed properly and consistently across weights, not because you can’t figure out how to do it better.

Learning & Experimenting
My recommendation is to learn the lifts with complete foot lift and replacement. I believe it’s the most commonly effective method, and it’s easier to learn first and change later than the other way around. If you choose to experiment with not lifting your feet, remember that you still need to meet all of the other criteria for a technically sound lift, and most importantly, your evaluation of the two methods should be concerned with only a single criterion: which, once you’ve become proficient, allows you to consistently and reliably lift the most weight.