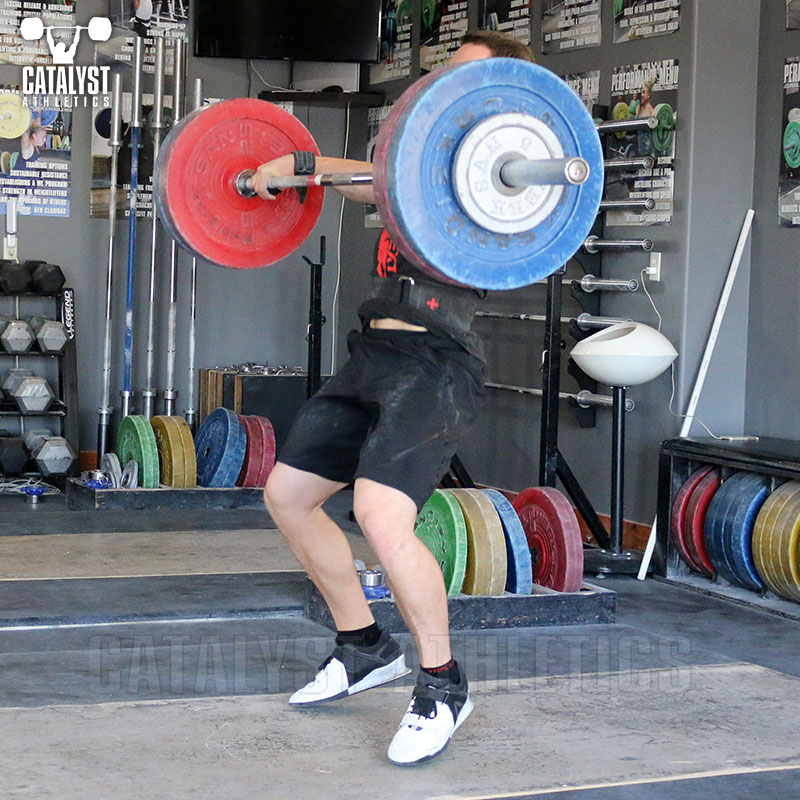 It’s time we had a serious talk about foot movement in the snatch and clean and the idea of efficiency.

It’s standard to hear people claim that lifting the feet more during the pull under is inefficient—that sliding them out rather than lifting them is more efficient, and since we all know efficiency is good, not lifting the feet is the better method—and to hear others accept this without blinking as if it makes perfect sense.

But what does this even mean? What exactly is efficiency in this context, and how does it affect the lift?

The feet should be moving only after we’re finished pushing through the floor to the peak of productive extension. Once that’s completed, continuing to push against the ground is not only not contributing to the lift, it’s detrimental—we need to remove that pressure against the floor to accelerate ourselves down under the bar. Any remaining pressure is resistance to that movement and limiting its speed.

Whether or not the feet are up in the air, or barely skimming over the floor, that removal of pressure has to occur for the best lifts.

(As an aside, stop saying that lifting the feet when pulling under the bar is preventing the application of power… it is… but that’s exactly what we need in that phase of the lift. The legs and hips can’t apply any more useful power to lifting the bar at that point—the continued upward force being applied to the bar is in reaction to the arms pulling the body down).

But the efficiency part is what really kills me… Efficiency is defined as the ratio of the useful work to the total energy expended. In weightlifting terms, how much weight we snatch and clean compared to how much effort is required to do so.

Efficiency is immaterial in the most direct sense—whoever lifts the most weight wins, no matter how much energy it required relative to the lift (work) achieved or anyone else’s effort for the same lift. If you snatch 150kg and the effort almost kills you, and your competitor snatches 149 easily, you still win. According to the official metrics of the sport, you’re the better weightlifter. If your best snatch last year was 110kg with moderate effort, and now you’re snatching 130kg with absolute maximal effort, are you worried that 130 is less efficient?

The only way efficiency is meaningful in a lift is that theoretically a more efficient movement allows more weight to be lifted with a present level of physical ability. That is, by moving more efficiently in a snatch, you should be able to snatch more without getting any stronger or faster because you’re utilizing your existing capabilities more effectively.

But it matters exactly what segment of the total motion we’re talking about here, and how that segment influences the lift in ways beyond energy expenditure or effort.

Does it take more effort and energy lift the meet more? Sure. But stop a second and think about it. How much more? How does that amount of effort or energy compare to the total work of a snatch? I’d argue it’s completely insignificant within anything from a single lift, to a series of lifts, to an entire training session. Bending at the hips to lift your legs up is not a lot of work in just about any context, but especially when compared to the effort of moving a weight greater than your own body’s from the floor to over your head.

Even if it were a comparatively significant expenditure of energy, consider the sequence. Lifting the feet occurs after the phase of the lift that demands the greatest proportion of the total effort (accelerating and elevating the bar)—lifting the feet to pull under can’t rob energy for a motion that precedes it. The only possible effect it could have is depleting more of your energy reserve for subsequent lifts... and again we return to the fact that it’s a negligible expenditure that’s unlikely to have any measurable effect even across a high-volume training session.

Further, consider the effects of lifting the feet in terms of gross movement effectiveness rather than energy expenditure or effort. By being completely disconnected from the floor, we ensure zero resistance to our downward acceleration. This allows us to move at maximal speed under the bar and consequently get under heavier weights with the same amount of acceleration and elevation—that is, we’re accomplishing more work for a given effort applied to lifting the bar, which is more efficient.

If our close-foot transition is imperfect and we have some pressure against the ground remaining or resuming prematurely, that means less speed under the bar, which in turn means being capable of getting under less weight even with the same effort to lift it—that is, less productive work for a given effort or energy expenditure… which is—that’s right—less efficient.

So lifting the feet higher is less efficient only if we isolate the foot motion from the entire lift—the lift overall is not less efficient.

The bottom line is that neither method of moving the feet is intrinsically superior—each has its benefits and drawbacks, and each will fail to reach its potential effectiveness if executed poorly. We see this demonstrated over and over by elite lifters, who achieve equally impressive results with varied methods, and with less advanced lifters, who can manage to make either method ineffective with improper execution.

So let’s quit confusing the issue with inappropriate discussions of efficiency, and instead focus on finding and perfecting the method that allows each individual lifter to achieve their best lifts.