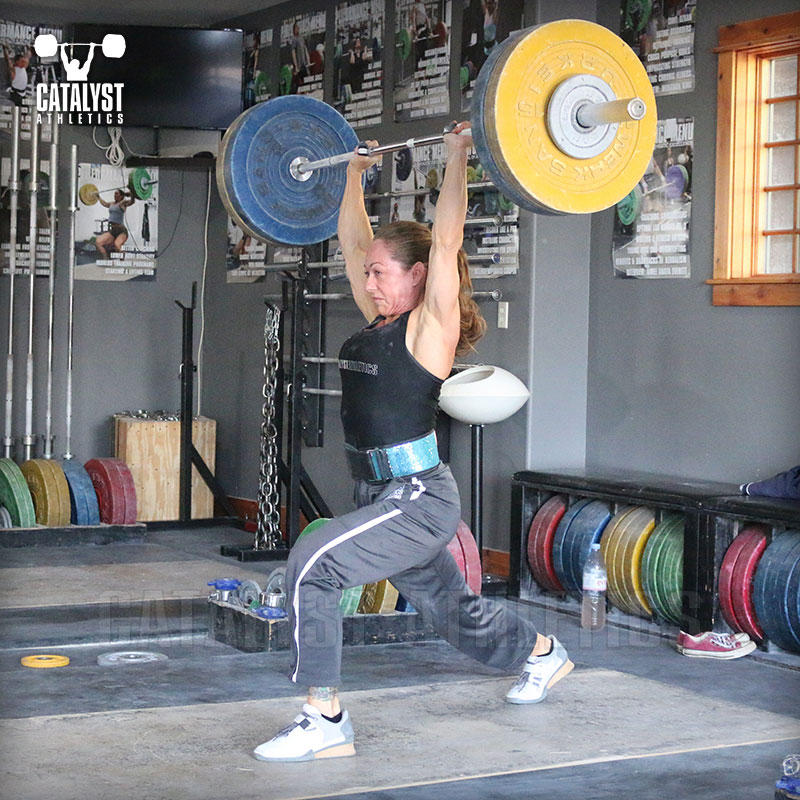 With the increased accessibility of jerk blocks these days, often lifters ask why they should lower jerks back to their shoulders? The most obvious answer is still: because not everyone has jerk blocks, and they still may need to do multiple-rep sets of the jerk, and likely don’t want to drop, strip and reload the bar every time they do a single either.

But even if you do have access to blocks, there are a few good reasons to lower your jerks anyway.

First, jerks themselves build relatively little upper body strength—the reality is that the upper body does little more than hold the weight isometrically overhead in a position that’s very structurally sound (if you have limited overhead mobility, you’re doing a lot more muscular work overhead than you would otherwise). Any amount of eccentric upper body work is providing some free strength work for the arms and shoulders—that is, we’re getting a significant strength training effect without adding exercises or time to an existing training session.

We’re also improving the strengthening effect for the trunk musculature and our ability to brace forcefully. It takes great trunk stability to receive heavy jerks back onto the shoulders without collapsing. This ability is valuable across the board, but of course very directly valuable for the jerk—the more rigidly we’re able to brace the trunk, the more power we’re able to put into the bar when jerking.

Next, absorbing and arresting the downward force of the bar with the legs improves their ability to do the same in the dip of the jerk—this means being able to support more weight generally, and more importantly, to brake more quickly, which in turn means being able to generate more elasticity in the bottom of the dip to contribute power to the drive.

Finally, lowering jerks develops a somewhat less definable quality: plain old guts. It’s difficult, it’s intimidating, and it gets a bit hairy at times. But you can’t underestimate the value of being tough enough to do it regularly.


When NOT to Lower Jerks

There are absolutely times when I recommend you don’t re-rack your jerks.

The first should be pretty obvious: when it causes pain. This can be a temporary issue such as existing medial elbow pain from tendinitis that’s aggravated by lowering jerks, or it can be pain caused directly by lowering. This typically occurs in lifters whose jerk grips are unusually wide—the fact is that such a wide grip just places the elbows in a marginal position for the movement and creates undue strain.

The second is if you simply can’t do it reliably safely—the goal with lowering jerks is to make you better at weightlifting, not to injure you. There is certainly some risk to the back, elbows and wrists if you’re not in control. My suggestion is to practice lowering with lighter weights until you build a consistent ability to do it well, and then incrementally increase the weights in a workout to which you continue lowering.