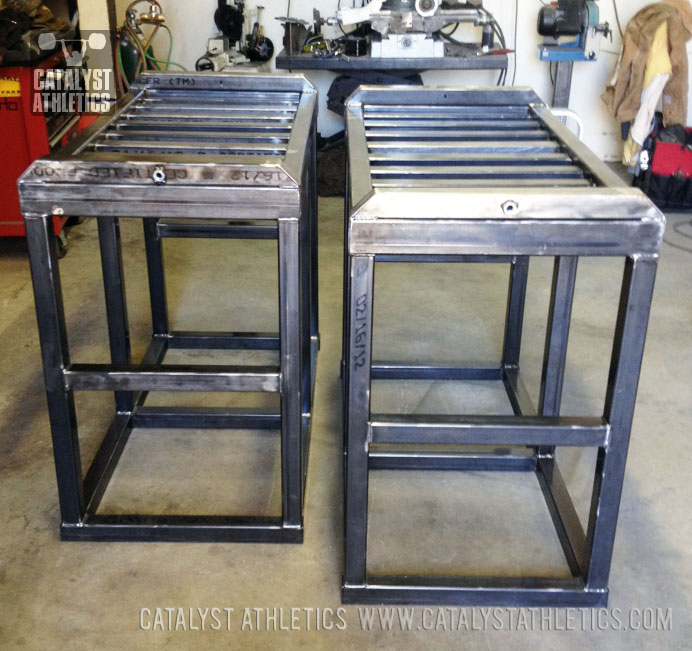 Having our new jerk tables delivered this morning made me think of a common question—when and why do you use jerk blocks or tables and when do you just take the jerk from a rack and bring it back down yourself? This of course is an opinion sort of question, so don’t take the following as some kind of weightlifting fact.

Plenty of great jerkers have never once done a jerk workout with blocks. They are not a requirement to having a jerk of any certain caliber. That being said, they’re a great tool to have at your disposal and allow a lifter to train a bit differently than he or she could without them.

Blocks should generally not be used with weights that a lifter can lower back to the shoulders. This is an opportunity to both get a bit more strength work in the upper body, build more elasticity and the ability to absorb and arrest downward force in the legs, and some general coordination practice. An exception to this of course would be in the case that the athlete is experiencing some kind of injury or problem that makes lowering the weight painful or in some other way problematic while doing the jerks themselves does not cause a problem.

What blocks are extremely useful for is allowing a lifter to perform multiple reps with heavier weights than he or she is capable of lowering safely at any given point in his or her life. If you have a lifter who can’t lower anything more than 80% of his or her best jerk, for example, you’re limited to doing singles at 80% and above, even if it’s clear that the lifter would be able to do maybe 2-3 reps at that weight. Obviously this gives the coach a lot more options for program design, and for an athlete whose jerk is a weak point, this can allow some dramatic improvements to be made. Jerks often respond very well to volume.

For heavy singles or max attempts, I generally don’t like a lifter to use the blocks. The primary reason is simply that the presence of the blocks often makes lifters change the way they dip because they’re hyperconscious of hitting the blocks at the bottom. While dropping the weight after each rep, stripping the bar, cleaning it back to the rack and reloading it is a lot of work, doing max jerks from a rack is usually a better idea.

As a coach, the blocks are also problematic for the reason that they prevent me from seeing the athlete’s feet from any angle except essentially head-on. Usually I want to watch from the side or at least an oblique angle, and solid wood blocks obscure the view (just to rub it in, the new jerk tables I had built are metal frames I’ll be able to see through so I can still see the athlete’s footwork from the side).

Another handy use for jerk blocks that I picked up from Bob Morris is to use them as a depth gauge for the dip. That is, when you have a lifter who tends to dip too deep, he or she can jerk from the blocks set at a height just below the depth to which they should be dipping. This forces them to keep the dip shallower so they don’t hit the plates on the blocks.

The bottom line is that if you have access to jerk blocks, take advantage of them, but don’t let yourself or your lifters get lazy and weak by becoming reliant on them.

Brian
So with the metal jerk blocks you had built (awesome looking!) I assume you're going to put 2 layers of rubber mats on the top still? Anything else you're doing to finish them off? (Might have to have my welding buddy start a project for me!)
Hugh Gilmore
I currently am welding up a set of Adjustable jerk boxes for GoLift weightlifting club in N Ireland, having no other designs to base it on I had to pretty much create it my self. I have two questions, Are the boxes here adjustable and if so how, and if not what height did you determine was optimum height for a fixed box design. Furthermore what is going on top of these as I assume you wont be just dropping the bumpers on top of the current picture. Thanks for your help, It is much appreciated. Keep up the good work.
Austin
Coach do you plan on listing your blueprints for these? Thanks.
Greg Everett
Hugh -

No blue prints. I just told the welder what I wanted and showed her a photo of the zhang kong blocks.

Matt Foreman
Good post. I never trained in a gym with jerk blocks, so I basically never used them throughout my career. I did one workout in a gym with blocks and didn't like them. They made me feel claustrophobic. I also think there are a lot of strength gains from not using them. But as you wrote, there are positives and it's obvious that there are some good lifters who use them. I don't know if I've seen them much in training videos from Europe or Asia. I wonder how common they are overseas.
Greg Everett
Matt -

I have seen the Polish use them, and I have seen the Chinese use them - the Chinese national training center has a field of jerk tables like you've never seen. But you're right that they don't appear often elsewhere that I've seen.
Simon
Greg, I'm curious to see how much these metal tables bounce; any videos of their use coming soon? I've seen videos of the use of the metal hang-height blocks in your gym and they bounce quite a lot. Too much I'd say.

These jerk tables/blocks are good pieces of equipment; I use a wooden set I made as a squat rack too. For jerks, I walk out so I don't hesitate to hit them during the dip, it just means I have to get them back up in case I miss, otherwise they receive the weight from overhead quite well without excessive bounce.
Greg Everett
Simon-

They're pretty heavy - I don't think they'll bounce much if at all. We actually haven't used them yet because I haven't had time yet to move the old ones and build the risers for the second height. There will be video of them as soon as we start using them.

The metal blocks you're talking about aren't really blocks - they're EFS pulling stands and not really meant to have weights dropped on them. They bounce around because they're small, light and not built squarely or particularly well (e.g. the support post wobbles in the base).
James
Coach,
It appears that the crossbars are recessed a little. Is this to allow space for some plywood to go below the rubber matting? Also, what is the purpose of the bolts that stick out at either end? I have noticed them on the other pics you have posted on the website.

Thank You!
Steve Pan
The recessed area on the top is to seat some plywood and lay matting on top/ The bolts that stick out at the ends hold an additional block piece to have them stand higher for taller users.
James
Is it rude to ask what the price of the boxes was? Material most specifically. I am trying to get a set made, and I was quoted $1600 for materials and labor. The guy making them is a friend of a friend who said he is giving me a good deal on labor. He is using 1/2" steel but it still seems steep.

Thanks
Greg Everett
James-
It was about $500 I think.
Nick G
I'm looking to build a set of these, but with a top section that is also metal. Coach, when you say you only use two heights, what heights are those? Thanks!
Steve Pan
The two heights we use are 38" and 44"