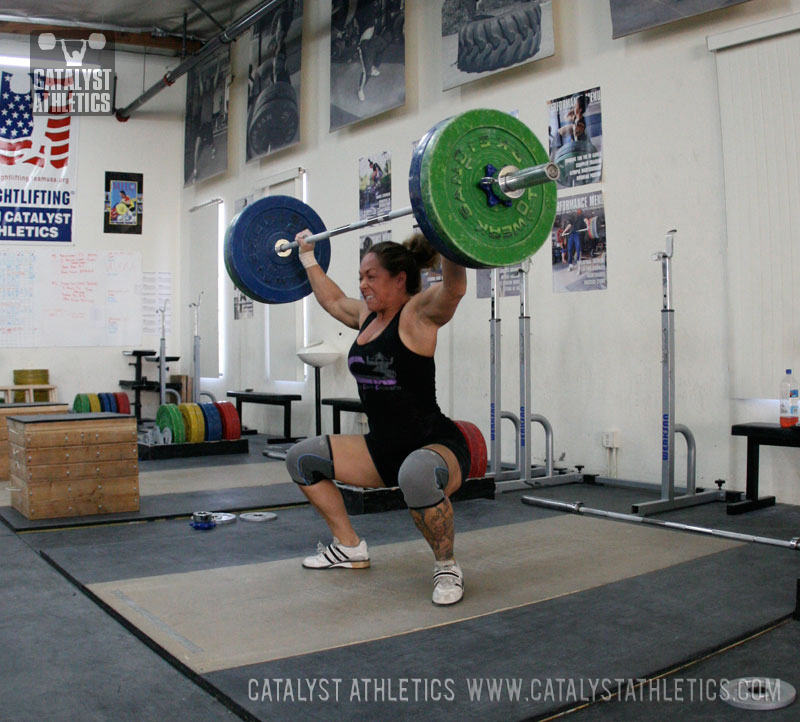 There are times in a lifter’s life when lifts aren’t made. These times are, of course, the absolute worst, and in those moments following a missed lift, athletes can generally find indisputable proof that they’ll never again succeed, why their abilities have already peaked and they’re finally and terminally on the decline, and why, being in such a stage of life, they no longer have any value to the world.

There are two basic responses following a missed lift: To accept it and move on, or to refuse to fail and fight back. Neither is always the best choice, and it isn’t always easy to know how to proceed after a missed lift. I’m going to explain how I approach this particular issue with the understanding that it’s not by any means perfect, and that there will certainly be times in your lifting careers in which going against the following advice is the smart call.

The first consideration to make when trying to decide how to proceed after a missed lift is to determine if the miss was a mistake or failure. That is, did you make a technical error that you know how to correct, or did you physically fail to lift the weight? The two are completely different experiences, and they warrant different responses.

If you miss a lift because you’re not strong enough to make it, the decision should be pretty obvious: stop. If you make a technical mistake and are confident you can correct it, generally it’s fine to repeat the set and make the correction. If you miss again, consider the possibility that you didn’t actually know what the problem is, or that it’s not entirely technical. If you’re tired, you have a considerable amount of work left in your training session, or your confidence in making the lift has dropped considerably, move on. If you’re feeling good, don’t have much if any subsequent training to worry about, and your last miss was closer than the first one, give it another ride.

A very important consideration when deciding whether or not to take a missed lift again, is how that additional attempt will affect your fatigue and as a consequence the rest of your training program. Generally training programs are constructed carefully with volume and intensity within desired parameters; if you add a number of additional reps, makes or not, you’re adding to the stress of the program and creating effects that were not intended or foreseen by whoever wrote the program. This can be a significant enough difference to cause problems in your next workout or workouts, and if it’s something you do frequently, to seriously disrupt your entire training cycle. If you’re missing more than occasionally, instead of banging your head against the wall trying to make up for those misses, you need to re-evaluate your programming or communicate the problem with your coach because it’s evident that the program is too ambitious.

It’s also important to understand what the intention for the lift in question is. For example, is the goal to use the exercise to get stronger? Is it to improve a certain aspect of your technique? Understanding this will help your decisions. If strength is the goal, and you missed a lift like a squat or press, assuming you didn’t make some kind of correctable mistake (much less likely with a basic strength exercise), the weight is too heavy and you’re done with that weight.

If you’re doing a more technical lift, such as a competition lift variant, there are more possible causes of a miss. The weight may be too heavy, but you may also just be doing something wrong technically, or you may not be focused or being as aggressive as needed. If the goal is technical improvement, the priority is proper execution. If the weight you’re attempting to use is preventing you from performing the lift correctly, it’s too heavy, whether you actually make the lift or not. If the goal is speed or power development, a miss may mean that you need to make a technical adjustment or get focused and you’ll be able to complete your prescribed lifts.

When an exercise is intended to work primarily on lift technique, again the priority is proper execution. If a weight is preventing this, generally the best course of action is simply reducing the weight to a point at which the lift can be properly performed for the intended reps and sets. Decisions on what weight to use can usually be made using warm-up lifts or previous sets as guides; look back to the last set that was done well, and that’s a good place to start. If you’re unsure, be conservative and drop a bit more; you can increase on subsequent sets if the lifting is adequately improved (sometimes moving down and coming back up will even allow you to make a weight you missed previously).

With strength exercises, the decision on what to do after a miss will depend a lot on what the rest of the program looks like, and whether the program at that point is more focused on intensity or volume. For example, if you’re back squatting heavy singles and doubles, the goal is obviously trying to achieve a certain level of intensity; a miss would indicate that the level of intensity desired is more than what you can handle at that time. If the volume of the program is low, which it more than likely is with such a rep prescription, it’s often wise to stop with the miss rather than accumulate more volume by reducing the weight and performing more reps.

In the case that you’re trying to rack up a certain amount of volume, the weight can be reduced as needed to allow you to finish out the prescribed sets and reps.

In some instances, we may have a certain number of sets and reps of an exercise that is somewhat technical in nature, but is also intended to build some strength and power. As an example, let’s say we’re doing 5 sets of 3 reps snatching from high blocks. The first 2 sets are done successfully, but the third rep of the third set is missed. The first 2 reps looked fine, but the last one wasn’t even close. Sometimes it makes sense, rather than reducing the weight to finish the sets, to do the remaining sets as doubles instead of triples, and to add a set to make up for the missed reps in the abbreviated sets. In this way, we’re completing the same amount of volume at the same weight, but just stretching the work out a little more to allow success.


Unfortunately, coming up with a totally rigid protocol isn’t possible. As an athlete or coach, there are many times in which your decisions will need to be made based more on intuition than science. Accumulated experience will improve that intuition, as well as improve your ability to design programs that tend to create this kind of situation in the first place.

Joshua Davis
Damn Greg that intro paragraph. Kicked me so hard in the feels they ended up in my throat. Happy Thanksgiving.