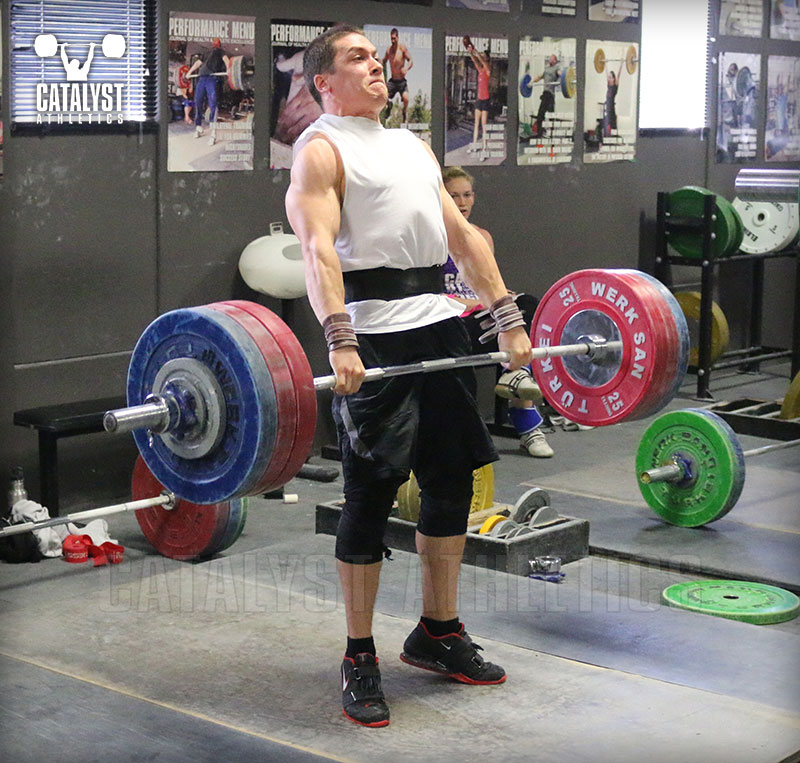 I spend a lot of time on this website and elsewhere discussing weightlifting technique, often in intolerably boring detail. Why technical proficiency is necessary and important is been mentioned with regard to things like CrossFit™ and athletic training, but it occurred to me last night that I can’t think of a time when I’ve said explicitly why it’s important for… weightlifters.

Maybe this is unnecessary and I’m concerned for no reason, but presumably you’ve come to accept my verbosity and affinity for repetition and will not find this an affront to your intellectual magnificence. I find myself giving this explanation to lifters in my own gym when I’m unmercifully hammering them with technical work and starting to wonder if they resent it or understand it.

Anyway, the point is this: The purpose of mastering weightlifting technique is to ultimately make the movements so natural that all of a lifter’s focus and energy can be channeled into producing power. That is, the less of a lifter’s resources are directed into ensuring proper mechanical execution of the lifts, the more of those resources can be directed into aggressive, vicious, explosive and decisive activation of the body.

The reason this issue gets complicated is that in the US, we’re overwhelmingly dealing with adults or at least late adolescents who have athletic backgrounds in sports other than weightlifting. Their introduction and development is occurring relatively late, and as a consequence, the process often looks different than it would in cases of the systematic recruitment and development of children into certain sports.

Primarily this difference is the timeframe in which such development needs to occur. In the ideal situation, motor patterns can be learned and ingrained extremely rigidly very early in youngsters with little or no flexibility limitations. The remainder of a lifter’s career can then be dedicated to developing strength and speed, with the repetition of technically consistent classic lifts with heavy weights further ingraining the skill. (Watch the elite of weightlifting in competition and you’ll notice that their misses typically look essentially identical to their makes with the exception of whatever extremely minor detail caused the miss; in contrast, US lifters’ misses are more likely to look significantly different than their makes.)

Instead of this, US lifters are often attempting to develop technical proficiency (and flexibility) alongside strength and speed. The processes are both abbreviated and conflated in a way that complicates the progression of the lifter considerably. This is not to say a good job can’t be done with US lifters coming to the game late; but it certainly makes it more difficult and special considerations need to be made.

The more time and effort you put into learning the lifts and mastering technical execution in the earliest stages of your foray into weightlifting, the more successful you will be, and possibly as appealing, the less overall time you will need to dedicate to technical work.

Matt Foreman
Good post, and this is a really sharp statement:

I think about this in connection with my own lifting, as I'm sure all readers do. There was a time in 1998 when I thought my snatch technique was just about perfect. I took me eight years to get there. What I remember about this time period is that I only had to think about two things to hit my snatches perfectly. Before each lift, I said to myself:
- Get my back tight
- Drive my hips into the bar as hard as I can

If I would have focused on those two cues when I was a novice, my technique would have been terrible because I would have been looping the bar in front of me, cutting my pull, jumping forward, etc. But after spending several years doing the exact kind of technique hammering that you're describing here, my form got to the point where I didn't have to think about many things, exactly like you said. All I had to concentrate on was getting set off the floor and then ripping the hell out of it.

When Randy Barnes set the world record in the shot put in 1990, a reporter asked him after the throw, "What were you thinking about technically prior to that throw?" Everybody thought they were going to hear some kind of technical revelation from him, but his answer was, "I just thought about knocking the s*** out of it." Because he had perfect technique totally ingrained, he was able to focus completely on power output.

When you reach this point, that's when you'll lift the biggest weights of your life. If you never reach it, you'll never get to your maximum capabilities. And it takes a long time, as you said.

kecks
Very true article! How many times i watched the guys who started out at age 5 in the gym and envied their technique... i can't count. way too many times. every single one of their attempts looks totally the same, make it 40 or 140kg or the empty bar. better get back to technique work ;).
Ashley Weber
Well said Greg!
Keith Fine
Great article, can't wait for the seminar in Fairfeld next month.
Brian Ross
Greg, good insights. Do you have any thoughts or can you point to any resources for teaching young children the lifts? I have a 6 year old son who is interested and I have been getting him started with power snatches and jerks with a broom stick or pvc.
Greg Everett
Brian - Keep it light and tons of repetition on the fundamentals, e.g. squat, press, DL and classic lifts (the latter very light until he's consistent). Keep it play-based and let him do as much or as little as he wants rather than being rigid about training volume/time/frequency - that will usually just turn a kid off.
Michael Hull
Great article.