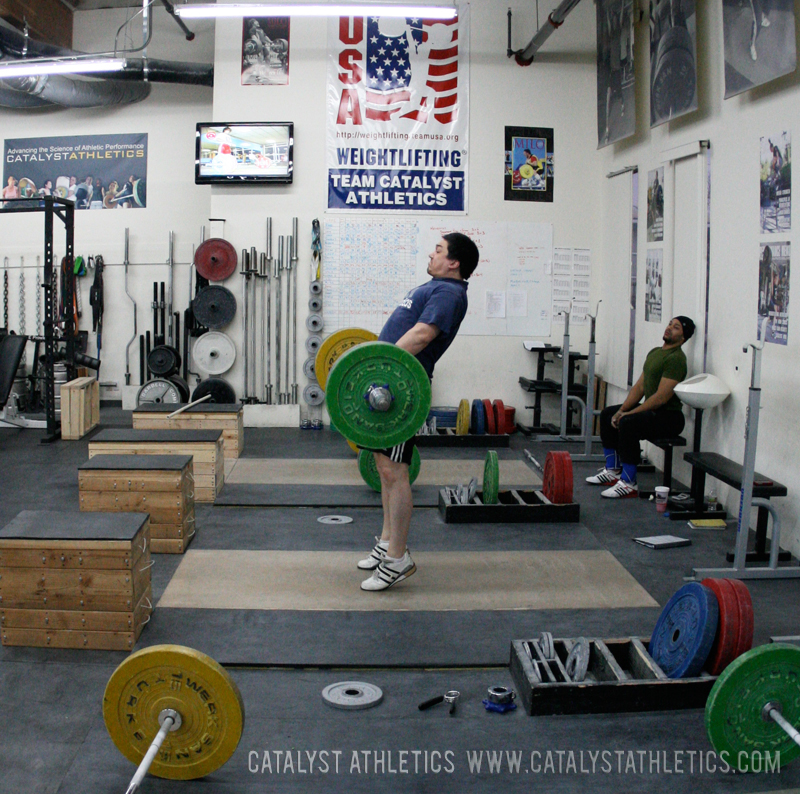 When it comes to weightlifting technique, there are disagreements. Some are legitimate, some are questionable, and a few are downright silly. But when you sift through it all, there are a few universal Truths when it comes to the snatch and clean. If you can make these following six things happen with a given technical style, you can probably make it work for you.
Truth 1: The lifter and barbell system must remain balanced over the feet.

This is pretty simple. If the balance of the system doesn’t remain over the feet, the combined weight of the bar and lifter will not be supported by the base and it will fall over. This is basically an average measure—the actual balance over the foot isn’t exactly the same throughout a given lift, but it must end up being essentially balanced on average. If it diverges too much at any given point, it will be more than the lifter can compensate for, and the result will be the entire system being pulled forward or backward out of balance. There is actually a bit of latitude here. It’s possible to perform a snatch or clean with a backward or even forward jump as long as you can re-establish the balance over the newly positioned base. However, there is a limit to how much this can be done, and any degree of horizontal movement, in particular in a forward direction, makes the stabilization of the bar more difficult.

Truth 2: The barbell and lifter must remain in close proximity to each other.

This seems pretty obvious like Truth One, but this Truth is violated so commonly that it warrants emphasis. I like to illustrate this point by asking people what they would do if I asked them to pick up a barbell and then rolled it away from them. Everyone either answers that they would walk up to the bar or roll the bar back to themselves—in this extreme example, no one fails to recognize that the closer the bar is, the easier it is to lift. When we’re talking about a more complex movement like the snatch or clean, the effect of distance between the bar and body is magnified; that is, extremely small distances can create big problems. I prefer to have the barbell as close to the lifter as possible without making contact until the appropriate point of contact during the final explosion effort (hips for the snatch, high upper thigh for the clean), but would rather have it in light contact earlier than be considerably distant.

Truth 3: There must be no time wasted at the top of the pull.

You can argue about either the elevation of the bar or the pull under the bar being more important than the other, but you can’t deny that any time spent in an extended position following the point of producing maximal acceleration is limiting the lifter’s ability to relocate under the bar. That is, whether you want to focus on lifting the bar or getting under it (or, a novel idea, both…), you have to transition between accelerating the bar upward and accelerating the body downward as quickly as possible.

Truth 4: The relocation under the bar is an active movement

The pull or push under the bar must be as aggressive as the attempt to accelerate it upward. In effective lifting, there is no falling, dropping or catching. There is pulling, pushing, squatting and splitting—the relocation of the lifter under the bar is just as active as the rest of the lift, and a lack of aggression in this phase of the lift will ensure a lifter fails to maximize his or her potential.

Truth 5: The receiving position must be stable and strong.

You can argue with regard to the snatch or jerk about how many degrees of internal or external rotation of the humerus is correct, what the shoulder blades should be doing, and how the hands should be holding the bar, but all that matters is that you establish the position that best allows you to support the weight and stand up with it. This position will vary somewhat among lifters based on anatomical peculiarities, flexibility, etc. The rack position of the clean similarly will look different among lifters, but in any case, the bar must be supported securely on the trunk, not in the hands and arms, and the position must allow optimal posture in the squat position.

Truth 6: Consistency is more important than the actual technical style.

No two athletes lift exactly the same way. Some use the same basic style, but every lifter has his or her own technical idiosyncrasies for better or worse. In the long term, it’s more important that a lifter perform the lifts as consistently as possible relative to him- or herself than it is to perform the lifts with a certain technical style (assuming the style is within the range of acceptable). If a lifter is much better with an emphasis on hip extension, his snatch or clean will look different than a lifter who is better at producing a powerful downward punch of the legs along with the hip explosion. If those styles are truly what works best for each lifter, each lifter is maximizing his ability and attempts to mimic another technical style will limit that ability to lift as much as possible. Each lifter should strive to optimize the technique that proves to be most effective, and then make that optimized technique second nature through high volumes of practice and training over time. Read Hips, Meet Bar for more on this.

Aaron
In reference to the lifter jumping forward or backward, would you never want a a backward jump?

Also, if other cues aren't working to fix a forward jump would a backward jump be something you would have the lifter focus on?

Greg Everett
Aaron - I'm fine with a small backward jump if it occurs naturally for a lifter - for those lifters, it works well. However, it has to be legitimately moving everything backward (i.e. the entire lifter and the bar), not just misplacement of the feet too far back (which can happen if the lifter overextends, is too soft with the knees during the final extension, and a few other things). And yes, I've talked in a few places about telling a lifter to jump back a quarter inch or so if they are continually jumping forward - usually that's an easy way to get them to re-balance their weight properly without thinking too much.
Steven Platek
Good stuff, as always Greg.
Thanks for the reminder of these critical Truths!
Kerry
Overhead Squat Instruction Trust and the Art of Competition Why Massage is Like Chicken Sexing Improving the Bridge (aka Plank) A Toast to a Real Strongman Volume vs. Strength Gains for Hypertrophy Running technique help from CrossFit guru Brian MacKenzie
Jewel
Aw, this was a really great post. In toehry I'd like to write like this also taking time and real effort to make a good article but what can I say I procrastinate alot and never seem to get something done.

Rich
Can't get enough of these truths and your knowledge. Extremely helpful to hear
Ryan
Great article, thanks for the insights. As a brand new Olympic lifter this was refreshing and assuring.

Spot on with this write-up, I absolutely feel this website needs much more attention. I’ll probably be returning to read more, thanks for the advice!
Susant
Wonderful items from you, man. I have remember your stuff prior to and you're simlpy too excellent. I actually like what you've obtained right here, certainly like what you are saying and the best way wherein you assert it. You are making it enjoyable and you continue to take care of to stay it smart. I cant wait to learn much more from you. This is really a tremendous web site.