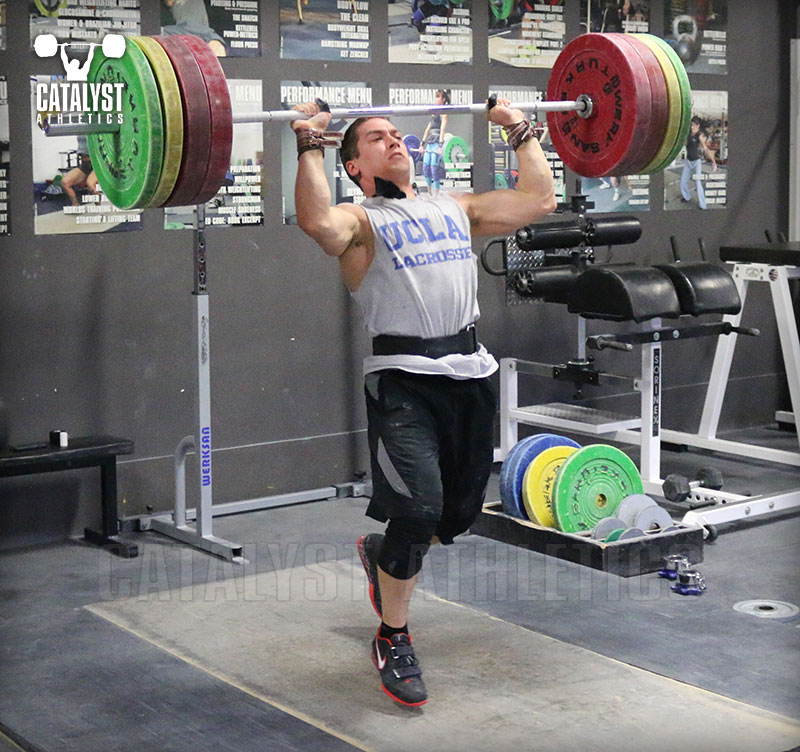 Jessica Asks: As a novice female lifter I have issues with my split jerk drive. I start fine with the dip but always go forward on the drive no matter how hard I fight it. It's less so when I power jerk but I'm not sure whether I should try to switch completely or not given the fact that I just can't move the same weight. Now I'll be the first to admit I need to get stronger and that does play a part here but I often wonder if the split jerk is the most effective/efficient way for me to go. Here is where my question lies, which jerk is more efficient in the world of Olympic Weightlifting the split or the power?

Greg Says: There are lifters in the world who will do better as power jerkers than as split jerkers, but they’re the exception. This is something that will become apparent over time, and that’s the important point—it takes time to determine if the power jerk is genuinely better for you or if you just haven’t learned how to split jerk well yet. Just like the snatch and clean, the jerk takes time to learn, and during the process of learning, it may not feel very good. Specifically, it’s very common for new lifters to dip and drive forward when doing the split jerk.

There is a reason that the vast majority of elite competitive weightlifters split jerk—it allows you (generally) to get more weight overhead for three basic reasons: You can get deep (about the level of a parallel squat), you have a very broad base in all directions, and it requires the least flexibility of the three possible jerks. The squat jerk will allow you to get the deepest (a full depth squat), but you have to be extremely flexible, strong and precise—you have to be able to recover from a jerk-grip overhead squat (possible from a dead stop in the bottom) with your maximum clean & jerk weight—AFTER doing that heavy clean—and put the bar in the perfect position, as there’s essentially no margin for error; the main benefit is that you have to elevate the bar the least in the squat jerk. In the power jerk, you have to elevate the bar higher than in the squat or split, have very good overhead flexibility, and have a good deal of precision with your bar placement, as well as be very balanced and precise in your dip and drive, i.e. you can’t shift forward or push the bar forward. The split jerk provides the greatest margin for error in terms of bar placement overhead with its broader base (you can more easily adjust to stay under the bar following an imperfect initial placement), the least demand on flexibility, and the greatest ease of recovery from even a very deep receiving position. In other words, it’s very much worth putting in the time and effort to try to master the split jerk rather than giving up and only using the power jerk.

Now to the part you actually care about: How to fix your split jerk. It’s very common for people to drive forward when doing the split jerk, even if they’re able to dip and drive vertically in a power or push jerk. This is normally the result of the lifter being so focused on the split that they begin it too early, and in combination with that, leaning or diving the chest forward as a part of the split action.

The first thing to understand is that the dip and drive of the split jerk should be identical to that of the power jerk—that is, it needs to be straight down, straight up and complete. The lift only varies with the splitting of the feet into the receiving position.

Your weight should be balanced on the heels but with full foot contact with the floor. That is, don’t shift back on your heels so far that you lose contact between the floor and the balls of your feet. This will nearly always result in your actually rocking farther forward than you were before shifting to your heels, directing your drive forward.

Unlock your knees and create tension on your quads. If you begin the dip of the jerk from the passive knee lock you normally stand with, there will be slack in the system and a moment of freefall before your quads catch up, and, aside from taking away from the smoothness of the movement we want, this will often shift you forward. Initiate the dip with a controlled enough acceleration that the bar remains connected to your shoulders completely. If you dip too abruptly, you lose that connection and the bar bounces on your shoulders, also generally shifting you forward.

Make sure that you’re getting a big, full breath—expanding the abdomen to ensure the diaphragm can drop—and locking it in tightly. Activate your glutes as well. You need to turn your trunk into a piston—totally rigid and prepared to move only vertically. After you take in your breath and stabilize, check your balance as sometimes taking the breath itself will shift you forward slightly.

To split, focus on lifting and reaching the heel of your front foot and driving your hips under the bar. Forget about the back foot—it will go far enough backward on its own, and thinking of reaching it back will usually cause you to push it too far back and actually pull your hips back out from under the bar, producing the same result as pushing the bar forward—your base is not underneath the weight, and consequently, you can’t support it overhead.

When you split, don’t reach your head and chest forward under the bar. Instead, split as described above while trying to push the bar back behind your head. This will help you achieve the ideal overhead position (bar over the back of the neck) while keeping you positioned under the bar properly. In the overhead position, your head and chest should be pushed forward somewhat, but if you attempt this prematurely, it will affect the entire position of your body. Let it happen more as a reaction to trying to push the bar back so that the timing is better.

Some exercises that can help are push jerks in a split position, presses in the split position, jerk balances, push presses, power jerks and split jerks behind the neck. A good complex for you would be push press + split jerk, trying to replicate the vertical and balanced dip and drive and the push of the bar back behind your head from the push press in the subsequent split jerk. Power jerk + split jerk is another good complex as long as you’re able to maintain your balance and vertical dip and drive in the power jerk.

Give yourself some time to work on improving your split jerk before you abandon it. Remember, this is stuff you don’t master quickly.

David Purser
I've been initiating the dip from a locked-knee position for years now. I also have problems shooting my back leg too far back and barely moving my front foot at all. The heavier the weight, the worse it becomes, and I usually have to chase PR attempts to the front of the platform. After reading your post today, I tried unlocking my knees just before starting the dip. My footwork improved immediately, and I felt stronger overhead than I have in months. Such a simple solution to a problem that has been holding back my lifting for so long. Thanks for the advice!
Greg Everett
Glad it helped, David. Sometimes (maybe even most of the time) the fixes are much simpler than we think.
Blaise
It's amazing how all the little tips and cues start to really make sense. At the beginning you read stuff like this and actually take in only a fraction. You think you've taken in a lot more, but most dissipates. Practice for a month or two, read again, practice - read more etc, etc. It starts to hit home and you can focus on fixing very subtle errors. Errors you didn't even know existed in a lift let alone know you were doing it. Fascinating.
Jip Jop
I have trained weightlifting for almost a year now and it still feels uncomfortable to get into the split position, but only for the hip of my rear leg. When I split jerk the hip feels like it is grinding against the acetabulum. I think this is because of my retroversion in the hips: when I squat or stand up straight, it feels most comfortable when my feet are turned out a lot. Because this seems like an anatomical problem, should I give up on split jerking or are there any corrections that I can make in order to be able to split jerk well?
If it's legitimately an anatomical issue, i.e. uncorrectable, you may have to stick to power jerks.