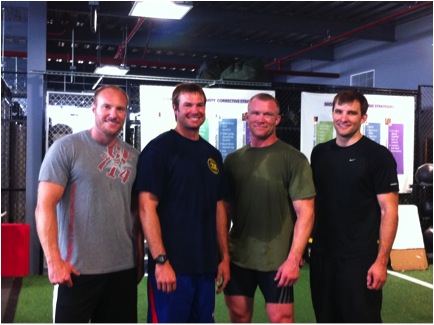 Tribe defined by Merriam Webster: A group of persons having a common character, occupation, or interest.

I remember vividly my first few months of weightlifting. I have lifted weights in some style since high school, but had never dabbled in Olympic lifting. On a deployment one of the guys I would lift with told me I should give it a try so I got home, bought some bumpers and quickly realized that teaching myself wasn’t going to work. Fortunately for me, I lived about 20 minutes from Coach Burgener, and after a couple of emails he said I could come up to train at his place.

As I was walking back up the driveway after being to told to park my car at the bottom of the hill, learning that one does not park at the upper level of the Burgener compound, I was greeted by a very confident 15 year old girl with both cheeks jammed full of sunflower seeds like a rabid squirrel wanting to know if I wanted to learn how to compete or just get in shape. To protect her identity we will just call her Sage.

OK, so two strikes against me: One, I don’t know where to park, and Two, I look like I need to get in shape? What the hell is going on here? So after the price is set and we discuss the rules, which were being on time and doing exactly what she says, we get to work.

So for the next couple of months I am there week in and week out busting my ass and getting marginally better as I do. I learned a couple of things about being up there; the first was Sage would let me max out every week but would only let me have a couple of misses. To “buy” myself some extra attempts, I would bring her Dill-Pickle-flavored sunflower seeds, which would either to distract her or make her feel sorry for me, thus giving me the green light for that one more attempt. The second was that the cool kids lifted up there on Saturdays.

Saturdays were the day: that’s when the serious lifters would be up there letting it rip and you would see some big weights being thrown around. There were national competitors and champions on every platform. I never asked about it; I just kept my mouth shut and kept going. Then all of a sudden one day Sage walked in and said, “My dad says you don’t pay anymore and that you can come up on Saturdays.” I was stoked beyond words; I couldn’t believe it and I couldn’t wait to get up there and train with the real lifters.

It was always awesome up there. That is the place I got to see the way the lifts were supposed to be lifted. Watching Aimee and Natalie was the first time I saw what “Speed through the middle” actually meant, or watching Casey hit doubles in the power snatch with 140 every 2 minutes for 10 sets. Some days it would be 25 people with so many bars on the platforms you could barely walk around. Other days it would just be me, Aimee and Greg. The point being is that it was our spot; it was where we belonged and where we wanted to be.

Now that was quite a few years ago and times have changed. Greg and Aimee moved up north and have their own tribe, which is just as awesome and I always love getting up there to train any chance I can. In fact a few months ago I had a birthday, which happens to be on the same day as Greg’s, and my wife wanted to know what I wanted to do and it was simple: “Let’s go visit Greg and Aimee,” knowing damn well the first order of business on Saturday would be coffee and weights with my friend. We spent a few days on the beach eating and relaxing but the best part was getting after it with my friend on the same platform just like it was years ago up at Coach Burgener’s.

I moved as well, and it’s just a bit more convenient to lift where I am now. The great thing is that I started out by myself, but over the last couple of years, I have been lucky enough to be joined by some great guys, and it’s nice to have people to lift with on a Saturday or Sunday morning where everyone comes together for the same interest or goal. These guys are all married, they all have kids, they all have real jobs with real life crap as well, and some of them drive an hour plus just to be there. These guys are lifters plain and simple. More importantly these guys are friends.

How do you get in my tribe (pictured above)?

Be in the military, old, way too tall and or skinny for Olympic lifting, be slow, have legs that are basically the same size as your arms, and have the attitude to get after it no matter how banged up you are and how shitty everything else in your life seems to be.

The point of the last 900 words? Get your ass into a tribe. Not only will you become a better lifter, but you will make friends that will be strong enough to help you move some furniture or a body.

I wrote this article a couple of months ago but sat on it due to knowing that a good lifter but a better friend would be leaving our tribe and moving back east. Brad, thank you for all of your help, and more importantly thank you for your friendship over the years. You will be missed on Sunday mornings.

Mike Baltren
Great post Mike. I have similar sentiments. I feel very lucky that I was able to train at Mike's on Saturdays and meet people like you, Greg, Aimee, Ashley, Casey, Natalie and the crew. Since those days Saturday has been my favorite day to train and we've been building a little Saturday crew at our gym.