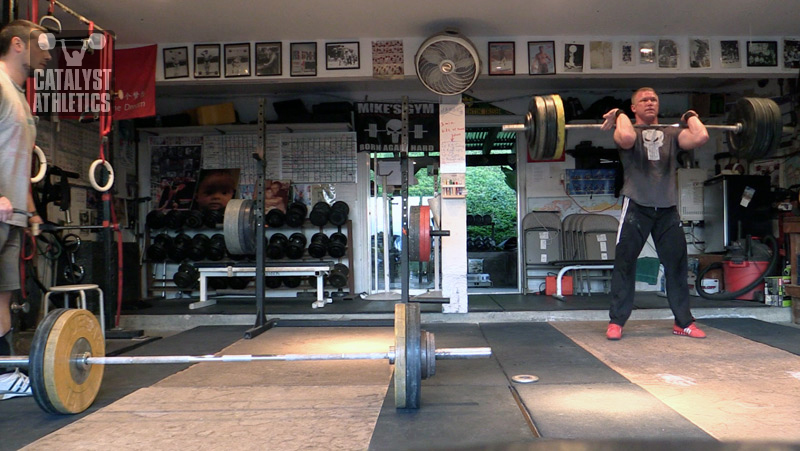 I’m going to preface this with the following: I am at most a journeyman weightlifter. I started years ago and I have competed regularly since then; I have done well in some meets and others I have not. You will never see me write about technique because I leave that to guys like Greg Everett and Matt Foreman who know what they are talking about, and more importantly can help people understand it. I’m just a guy who loves the sport and loves to be around others that do. I have been incredibly fortunate in that I lived in the right zip code at the right time and could be tolerated enough by those people to be allowed to train with them. I can attribute everything I know about weightlifting to being teammates/friends with those people.

Although weightlifting could be considered an individual sport, there is a good chance you will be on some sort of team or at the very least train with others at some point in your career. So the question is, Are you someone whom others want to train with, or are you the jackass that makes people cringe when you walk into the gym? I have trained with both and have learned plenty from both, and I have most likely been guilty of being both at one point or another.

Are you someone whom others want to train with, or are you the jackass that makes people cringe when you walk into the gym?

Think about the great days you had in the gym: Who was there with you? What was the vibe like? Probably pretty positive, and I’m willing to bet that the feeling crept from platform to platform and lifter to lifter. So why not be the teammate who tries to cultivate that feeling every day? I personally always surround myself with other positive lifters no matter who they are or what their skill level is.

This last week is a great example of that. Two of the days during the past week I was fortunate enough to train along side Greg while he was visiting Coach Burgener. Now for me that’s the pinnacle because that’s where we all started out, so it’s like going back in time seven years, banging away while our coach is looking on—really doesn’t get much better than that, even sitting in that freezing ass pool afterwards.

Now on the other side of that, this Saturday was different. I was in my garage, but there is a new guy Dmitry (great weightlifting name) who started training with my regular crew. He is relatively new to the sport, but the guy is awesome to lift with because he has that super positive vibe and it bleeds over to everyone else. Am I jealous he hit like 5 PRs in one session including a bodyweight snatch? Yeah sure, a little bit, but I couldn’t be happier because the guy works hard and is great to train with. I would rather train with a bunch of positive new guys who can’t lift up their socks than a group of strong guys who are just a bunch of clown shoes.

So because I love making lists, I am going to leave a few pointers to remember when training with others:


1. BE SUPPORTIVE! This was something that always took me by surprise my first six months or so in weightlifting: When I approached the bar, I would get tons of encouraging words (probably because I needed them) directed towards me. Personally I think it’s important and it’s something you should do with sincerity.

2. Know your teammates’ lifts. What I mean by this is if you look over and see 105 on the bar and you know that 104 is their best snatch, then take notice, send encouraging words, take video or a picture. Who wouldn’t want video of a PR lift?

3. Be on time, for God’s sake. If you aren’t, that’s telling me and everyone else that our time doesn’t mean anything to you. If you are late, then lunch is on you, or you better have a sack of Xyience to make amends.

5. Be humble. I trained with National Champions and Olympians early on and they were all humble, so it always shocked me when I would train with somebody that hadn’t done much of anything in the sport who wasn’t.

6. Help out the new guys. They might be too intimidated to ask and will just keep their heads down and plod away. Give them some tips, and always be helpful.

7. On that note, be honest. I don’t mind you asking how many times I plan on missing that lift before I stop for the day. I probably wont listen to you, but I appreciate your concern.

8. Clean up after yourself. Yeah, we all want to put away your weights, throw your Red Bull cans out and tidy up your platform. You must be kidding. I hesitated writing this, but honestly, I have seen it way too much.

9. If your teammate is competing and you are not, and it’s possible for you to be there, then make an honest effort to get there and support them and most likely help out. Trust me, I know it sucks going to a meet you aren’t in. Answering the “Are you hurt” question 42 times sucks, but this isn’t about you, it’s about them. Get there, bring beer for later, and be ready to help them in the warm up room.

10. The last one, and it’s the most important: If you are having a shit day—and let’s be honest, it’s going to happen—don’t make everyone else’s day like yours. Get behind them and be the supportive teammate you would want behind you.

Matt Foreman
Nice article Mike. In my opinion, this kind of stuff is just as important as technique and programming.
D.E. Heeren
I have trained by myself either in a garage or a basement for over 20 years. My music motivates me, Slayer, The Cult, Yngwie Malmsteen, German bands like Oidoxie, Stahlgewitter, Sturmwehr, goth music like the Sisters Of Mercy. So I am a good teammate to myself.
Willie
Mike definitely practices what he preaches. He pushed me to a 3 PR day and I had a video of each one. This was also my first time ever meeting him. Thanks Mike!
Mike Gray
Willie I'm sorry I wasn't able to say good bye before I left, had a great time out there training with you and almost dying in that heat about 5 times.
Andrew Alvarado
Very cool article. I have been training with Catalyst now for 2 months. It is the best decision I have made in a long time. I will be sharing this article with the members of my gym. Nice work.