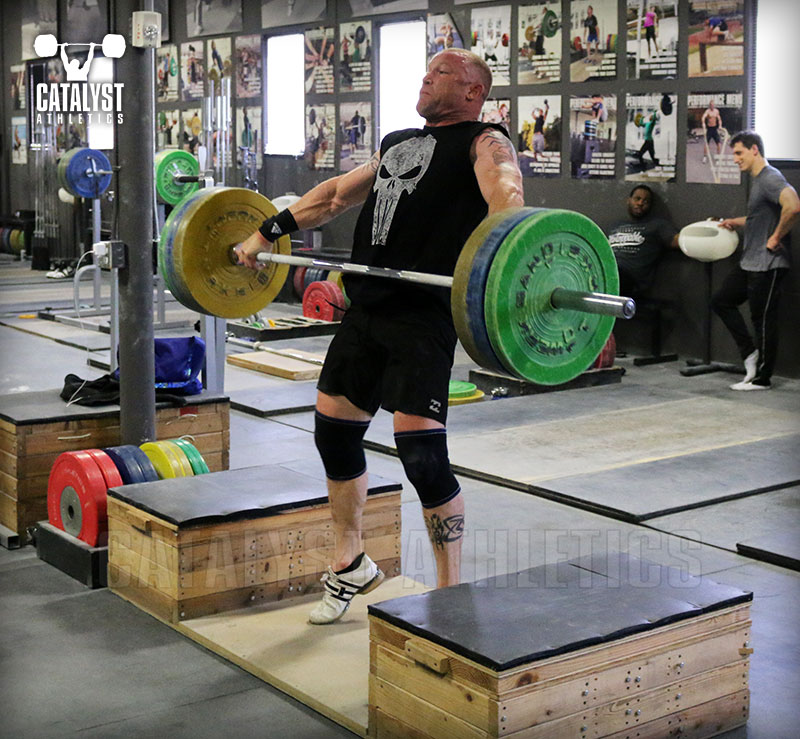 A few days ago, Miley Cyrus got on the Today Show and told Matt Lauer that people are no longer sexual after they turn 40.

I think this is bad news for a lot of us, especially weightlifters.

You see, many of you are starting to get a little older. I’ve learned a lot about the people who read the articles and blogs on Catalyst, and I know we’ve got a wide range of ages. Some of you are in your 20s, but a lot of you are in your 30s and 40s too (and older). This is why Miley’s announcement is so scary.

Weightlifting is much more difficult than having sex. So if your sex life goes kaplooey when you hit 40, it must mean your weightlifting life is really gonna go straight in the crapper around the same time.

Jeez, this is a rough situation because some of you are in your 30s and you just recently started falling in love with the OLifts. So according to Miley, you’ve only got a few more years left to enjoy doing this stuff. Once you pass 40, you will no longer be able to snatch, clean and jerk, or shag.

I turned 41 this summer. That means I’ve already peaked, and now I’m just kidding myself. All you people who are older than me are in the same boat.

So what are we going to do? Are we supposed to quit doing what we love when we pass the point of no return? I guess that’s an option. We could walk away from the barbell and find something else to do.

Maybe I could try hiking, or riding horses, or golf. The problem is that I hate all that crap. Hiking is out because walking long distances sucks. Why the hell would I want to do that when I have a car? Riding horses? Nah, don’t think so. I’ve been on a horse once in my life, when I was in high school. The stupid thing just stood there while I sat on it, wouldn’t take me for a ride or anything. If I would have had a shotgun with me, I would have blown its head off. Golf? Screw that. I refuse to take something seriously when a 60 year-old dude with man boobs can beat me at it.

So it’s back to weightlifting, which is all I’ve ever really wanted to do anyway.

My best days are all behind me. I know that, and it’s okay. I accomplished everything I wanted to do in my career, so lifting is just for fun now. It’s still really cool to be able to do it, and I don’t have to live with pressure anymore because I don’t have anything left to prove.

However, many of you are in a different boat. Let me explain what I mean by that. I started competing when I was 15, so I had the opportunity to work my way up in the national rankings when I was in my prime years. I was fortunate because I found the sport at a young age. A lot of you didn’t find it until you were already grown adults with careers and real-life responsibilities, so you’re probably not going to get a shot at making an Olympic team or anything like that.

This sounds depressing. And on top of that, you can’t have sex anymore. It’s like a black hole of hopelessness.

Not true, actually. There is something I can tell you that should make you feel better. Many of you who started weightlifting at an older age are in a better position now than guys like me. Seriously.

Look at it this way. I hit all of my best lifts when I was 26. I snatched 341 back then. Now, I’m 41 and I snatch around 280. I’ll probably never get back to 341. That means I’ll never set another lifetime PR. But those of you who are starting at an older age still have a long run of PRs ahead of you. Maybe you’re not going to compete in the Olympic Trials, but you’re still on the way up. You’ve just learned how to do the OLifts. Even if you’re an old person, you’re still going to get that climbing-the-ladder phase we all experience in our early training years. You probably won’t be lifting the same weights as the young studs in their 20s, but so what? What you’re doing is still awesome. It’ll be a great replacement for all that sex you’re not having anymore.

You also don’t have as much iron mileage on your body as guys like me, which is another ace up your sleeve. Sure, you’re still old. But your joints haven’t been pounded by 20 years of hardcore weightlifting training. That means you have an advantage. Lifting takes a toll on your body over time. It’s taken a toll on mine. I snatched over 300 lbs. for fifteen consecutive years of my career (1994-2009). That kind of strain adds up. Don’t get me wrong, weightlifting doesn’t wreck you. I’m still lifting well and I feel terrific, but I can’t do the things I used to do because of my mileage. If you’ve got lower mileage on your body, you’ve got more chances ahead.

See? Don’t you feel better now? It’s almost cool enough to make up for all the years of romantic wasteland you’ve got ahead of you, according to America’s sweetheart.

Just kidding. Listen, Miley Cyrus is a lightning rod for controversy these days. A lot of people hate her because they think she acts like an idiot. I actually like her. She’s got major balls, that’s for sure. Sure, she has her head up her ass. But she’s 20 years old. Think back to when you were 20, and try to remember how stupid you acted. Now imagine if you would have had millions of dollars and basically no consequences for anything. Plus, my opinion matters more than hers. I’m in the American Weightlifting movie, and she’s not.

Young kids think it’s a death sentence to start getting older. I guess it can be, if you let it. Your whole life depends on how you look at it. We’re all going to be old people someday. You might think that means your opportunities are dwindling away. Maybe they are, but maybe they aren’t. Maybe you’ve still got a shot. Maybe you’ve even got some advantages you haven’t thought of.

And if people try to discourage you, tell them to go twerk themselves.

Janice
Reading your article gave me the best laugh of my day! Since I only discovered the joy of weightlifting at 52 I look forward to many more years of sex, weight lifting and rock and roll:)
Marc
Dang! I KNEW there was somethin' I had fergottin' ta do in the last 16 years but I jes' couldn't remember what! Thanks, Miley!
Gotta go snatch now ...
Jeff
Thanks for this. As someone that just picked up the sport at 32 I was starting to think about not even trying because I am well past my (or most anyone's) prime. But dang it is so much fun.
David
I'm a 39 year old who just picked up the O-lifts in the last year, and I love them. At this age, I appreciate the mental aspects of the lifts as much if not more than the actual physical lifting (although hitting a snatch deep in the hole is pretty freakin' great). As a younger "masters" athlete, my mind can still help me bridge the gap between me and the younger brutes who grip it and rip it. But those days aren't going to last too much longer. Your perspective is very much appreciated, and I know I can look forward to years of personal bests, even if I can't take all the younger guys one-on-one.
Tom Brown III
I started weightlifting a year ago when I was 49, my wife says I now look much better naked, I get laid all the time - Miley might be wrong on his one!
Russ
Thanks for this. Just what I needed--having discovered O-lifting at 43.
Geoff
Started weightlifting this year - at 43. Found this post after a particularly bad day in the gym. It was just the shot in the arm that I needed to get back to work and keep at it. Thank you.
julio laboy
Gonna make the reaper work for my ass. Gonna be 48. Just found serious Olympic lifting a year ago. There is no stopping me, especially when you have a Matt Foreman to look up to... been on the platform 2x as a Master. Can't wait for the next meet. Thanks for the article.
Barbara
I had the pleasure of participating at the Master's Nationals a few years ago and I have to say, some of the older Masters were incredible. Some came to the event with their children and grandchildren and looked better than their children! I had to ask who was the parent. And the best was an older lady competing along side her daughter, and it wasn't clear who was the mom. I think we age at a very different rate when we incorporate Oly Lifts into our lives.
Seventy Year Old Man
I would like to hear what Miley Cyrus says when she is 40. I believe she will adjust her opinion of the "cut off" age for sex. I've found that people move the "cut off" age for sex to at least 10 years older than their current age. Do you think Madonna still has sex? I have no doubt - SHE DOES!
Brandi
Dear God. I'm not sure how this article was supposed to make you feel like anything other than crap if you're over 40.
Thanks.
Anthony
Came late to both; weightlifting after 40, dang it all. How do they compare? Sex is only partly down to you; it's really (ideally) a joint effort. The loaded barbell behaves exactly the same way every time and has no headaches or unrealistic expectations: what you get out of lifting is totally down to you. On balance weightlifting wins every time!
Mark
That has to be the best literary combination of Miley Cyrus and weightlifting I've every read. Of course, it is the *only* combination of the two I've ever read but, still, hilarious and even a bit informative all the way through.