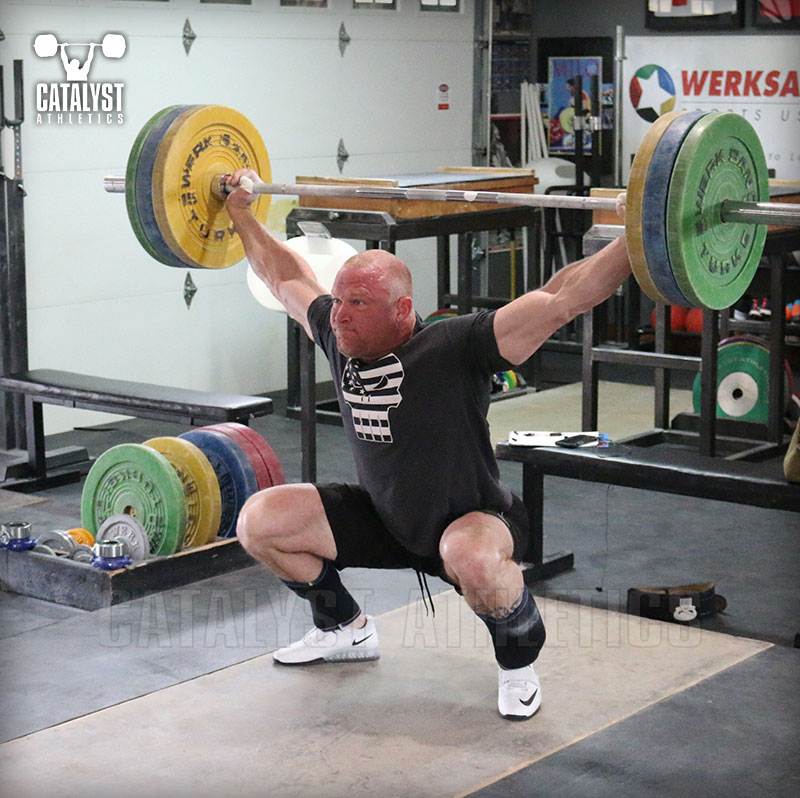 I’m going to start this article with a post I put on Facebook recently. A masters lifter had tagged me in a separate post of her own where she was wondering out loud about what kind of performance decline athletes should expect as they get older and progress upward through the age groups.  Here’s what I wrote:

Somebody mentioned something this morning about wanting to know how much decline you can expect in your lifts as you progress upwards through the age divisions in weightlifting.

I’ve got tons of thoughts about this, so I’m going to write an article (maybe even a series of articles) about it. At least half of you are old masters lifters, and you’re interested in knowing what you’re up against in the future years if you stay in the game.

I guess one of the first fundamental things I believe about this is that you should never expect a decline in your performance. Your numbers might go down as your age goes up, but that doesn’t mean you’re getting worse. Let’s say you’ve got a 200 kg total when you’re 35 and that number gives you a 292 Malone-Meltzer Sinclair score (the Sinclair formula that factors in your age). Then, eight years later, you’re totaling 190 kg at the same bodyweight, but your formula score is now 300. Your total went down, but you’re actually performing better for your age.

The point is you have to look at “performance” a different way when you’re older. Hell, you might hang on to the same total for six years as you travel through your 40s or 50s. That means you’re winning the battle. If you’re not getting worse as you get older, you’re getting better. More to come.

So there’s that, first of all.  Now let me go through some of the additional thoughts I had about this subject.

People often ask me about what’s going to happen to their weightlifting results as they get older.   The nutshell question is always… is there any hope that my total will actually increase as I get old, or should I expect basically a steady drop-off over time?

The answer to that largely has to do with how old you were when you started lifting.  If you’ve been a weightlifter since you were young and you hit a big performance peak when you were in your mid 20s, you can usually expect a steady decline as you get older…if you’re even interested in continuing to lift at all.  For example, if you started competing when you were a teenager and you won a national title with a 340 kg total when you were 27, you’re probably not going to total 352 when you’re 41. Most likely, your total will just kind of gradually slide lower and lower as you get older.

You have to remember something…many of the top masters lifters in the world weren’t big-time lifters when they were younger.  There are occasional exceptions to this, like Olympians Fred Lowe and Michael Cohen, who have continued to dominate masters weightlifting in their 40s and 50s.  However, most athletes who won prestigious national or world championships in their 20s don’t continue competing as masters. Instead, the majority of the top masters in the world fit into two brackets:

One of the main reasons why these people are able to lift big weights in their older years is their bodies simply aren’t as beat up as lifters who were top-tier competitors in their youth.  When you make an Olympic team, or win a national or world championship, you’ve put yourself through a hellish pounding that most people can’t even understand. That kind of pounding puts a huge level of wear and tear on your body and your mind.  Most elite lifters think about continuing with this kind of training in their older years and say, “Ugh, no thanks.”  Understandably so. They paid the price and earned their stripes. If they want to be done, more power to them.

People who start weightlifting when they’re older simply don’t have that kind of mileage on their bodies. They’re new, they’re not wrecked, and they’re learning.  In these kinds of situations, you can absolutely expect continued progress…even if you’re older.  If somebody starts weightlifting when they’re 40 or 50, they’re going to experience the same early-stage progress every weightlifter gets. They’ll probably keep increasing their totals throughout their 40s or 50s because they’re improving their skills every year.

When will it stop?  When will athletes like this hit their lifetime top lifts, and then everything else afterwards will be downhill?  There’s absolutely no way of knowing that for sure. It’ll be entirely individual.

One thing I can say for certain is that injuries often result in permanent decline when you get older. Let’s say you’ve got a 46 year-old lifter who’s been training for seven years and has a 195 kg total.  He gets hurt, has to take some considerable time off, recovers, and then starts training again. There’s a high chance his total will take a hit that he won’t bounce all the way back from. You lose it fast when you’re old. This is why it’s so incredibly important to set up your training with the right priority list when you’re a master.  Staying healthy comes first, always. NOTE: I’m talking about real injuries, not little ones. The ones that take you out of the game for several months, or longer (possibly involving surgery).

All of this gets back to the original point I made in that Facebook post. You have to measure your performance in different ways once you’ve passed your peak. That age-corrected formula I talked about, the Malone-Meltzer Sinclair formula, is a great way to do it. I totaled 303 kg at 122 kg bodyweight when I was 37, which gave me a score of 348 points on that formula. If I can total around 275 kg at 115 kg bodyweight when I’m 47, that will put me around 355 points.  So my total will have dropped almost 30 kilos, but I’ll be doing better lifting for my age. NOTE: The Queensland Weightlifting Association has an online calculator that does this formula for you.

I know some people have argued about the accuracy and reliability of the age-corrected formula. But give us a break, for Christ’s sake.  We’re old weightlifters who want to feel better about our performance as we drag along towards the grave. We’re not splitting the atom. Cut us some slack.

Bill Pearce
Learned weightlifting from Denis Reno ib USAF ib 1959. First competition un 1966. Still at it in 2016. Not too bright. Did my best in my 40's. Yes we lose kilos on the lifts but the movements are great exercise. If I total 90 now at 79 it's great. I've had shoulder and knee surgery but it is still fun to lift. Don't give up.
Jessica
This literally saved my day, Matt. Thanks for giving a little piece of hope to a masters lifter who is just struggling with some self-confidence issues because of her age (35)!