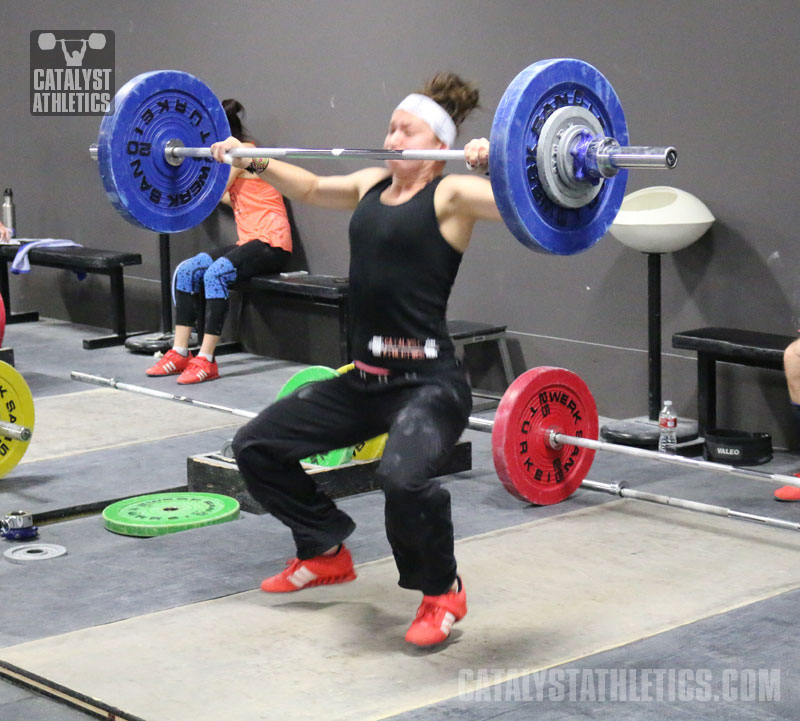 I’m taking some risk with this article. I’m gonna give you a technical tip for the snatch. If you do it right, it might fix a lot of your problems. If you do it wrong, you might get hurt. And I don’t want you to get hurt. But as with many things in life, you have to roll the dice sometimes.

Many of you put videos of your lifts on the internet, either on this site or somewhere else. You usually do this because you’re looking for some help and advice with your technique.

I watch a lot of these videos. And of course, one of the lifts people always have the most trouble with is the snatch. Learning how to snatch correctly is difficult. You find out a lot about yourself while you’re trying to master it. Aspects of your body and your brain are revealed to you in a way you’ve never considered.

Technique errors come with the territory. One of the things you’ve probably figured out already is that some errors are common among new lifters. Many people make similar mistakes when they’re learning. Without a doubt, looping the bar out in front of the body is a problem we all see frequently.

“Looping” is when the bar doesn’t stay close to the abdomen and chest as the lifter completes the pull and transitions into jumping down to the bottom position. If you’ve got any experience at all in Olympic lifting, I’m sure you know what I’m talking about. Some coaches call it “the swing.” It’s the problem that causes coaches to say, “Keep the bar close to your body.” We all know that the barbell is supposed to stay close as you execute the lift. That’s one of the first lessons you learn. But when lifters are starting to learn how to drive their hips into the bar, there’s a tendency to let it swing forward. If you watch this from the side, you see a big circular forward arc of the barbell when the lifter is completing the pulling movement. It’s actually a pretty normal action-reaction thing, but it has to be fixed. You’ll never perfect this lift if you can’t correct this blunder.

Coaches use a lot of different verbal cues and corrective exercises to clean up this mistake. I used to have a big problem with looping, and I heard a lot of advice on how to fix it.

“Keep your back tighter off the floor.”
“Turn your elbows out before you start the lift.”
“Pull yourself under the bar.”

I understood all of this input, and I tried to use it. Some of it worked, even if it was just to make me more conscious of the looping problem. But do you want to know the cue that really fixed this error for me? It wasn’t something I heard from a coach or another lifter. It’s something that I just thought of on my own.

“Feel the bar pass close to the face.”

Yep, that’s how I cured my looping. For some reason, I started moving correctly when I thought about feeling the barbell close to my face as it went over my head. I don’t know why it worked, but it did.

I don’t use this cue when teaching somebody else. Actually, I’m even hesitant about giving it to you now. The obvious reason why I’m reluctant with this advice is that somebody could overdo it and smash their face into the bar. Ever seen somebody whack themselves in the kisser in the middle of a snatch? I have. The athlete is moving so fast that their timing gets messed up and WHAM! I’ve seen two bloody noses and one dented forehead as a result of this.

But I’ve never done it myself, despite the fact that I’ve been using this mental cue in my own training for years. I admit that it’s risky to think about the snatch in the way I’ve described here, and I certainly don’t want to give you any advice that’s going to get you hurt. The point I’m trying to make is that you have to search for the things that mentally work for you. It’s a long process and it might involve taking some chances, stepping outside your comfort zone. Plus, if you also tell yourself to wait until the bar clears your head before you turn the wrists over and stick it over the ears, you should be okay.

The 2014 European Championships just wrapped up, so the internet is abuzz with videos of big lifts from the competition. If you go on hookgrip’s Facebook page, there are two snatch videos in particular I’m thinking of. One of them is Andrey Demanov from Russia, and the other one is Tigran Martirosyan of Armenia. If you watch their lifts in slow-motion, you’ll see exactly what I’m talking about.

No two brains are exactly alike and athletes have a zillion different ways of processing information. A comment that clicks with one person might make absolutely no sense to somebody else. Everybody has had an experience when they mentally locked in on a particular idea that resulted in proper movement. At some point, we all find one or two perfect cues that we can say to ourselves prior to a lift. When we concentrate on these things, we move the right way. It just so happens that when Matt Foreman thinks about feeling the bar close to his face, the rest of his body moves the way it’s supposed to. Your lifting career will be a never-ending process of trying to find the right cues for you. Sometimes, they’ll just pop into your head on their own.

Snatch well my friends, and don’t bonk yourself in the noggin with the barbell. It’ll hurt.

Sonny Wankle
Matt, great article. I have thought about this very topic recently. I know I have to feel the bar pass my face and there is a chance it may smash me in the face. I have an issue where I turn my face to the left when I jump under the bar (when the weight gets heavy). That is a problem I've been trying to get rid of for sometime. Do you think this is a mental issue(confidence) or am compensating for something else going on in my body during the lift?
Darren Hansen
Matt, isn't it common that if you are having issues with the swing of the bar on the second pull that a big problem could be not getting the torso vertical enough before you start the second pull?
Matt Foreman
Sonny- That's a tough one. It could be caused by a variety of things (confidence, strength imbalance in some area, anatomical proportions, etc.) Get it on video and see if you can figure it out.

Darren- Yes, absolutely. In this article, I didn't address technical pulling issues with the positions of the hips, shoulders, arms, etc. because I wanted to just focus on a simple cue instead of making it a comprehensive snatch technique article. But you're right, looping can definitely be caused by not getting the torso vertical before jumping and extending.

K
Sonny. I also have this problem. I noticed it happens when I'm transitioning underneath the bar and keeps happening until after I can correct it after I am in the receiving position. While it is definitely a combination of things including confidence, one of the biggest issues is neck tension. Because of personal circumstances, the right side of my body is much, much more tenser than the left. It tends to cause imbalance that is shifting my head towards the (less tense) left side. It probably also happens at lighter weights but it tends to be less noticeable since there is less strain and less energy involved.

My two suggestions are 1. Putting attention to focusing on a fixed target the entire time and correcting your head position before getting out of your receiving position. 2. See a physical therapist about body and specifically neck stress/tension imbalances. I recently did due to other issues and I definitely feel the difference in my snatch.

Lucas
Great cue!! I'll have to try adding that into my coaching bag. A similar thing I do w my athletes is having them wear a ball cap and tell them to try to hit the bill. They never do, but it makes them keep the bar close trying to hit the hat's bill.
Mark Sanchez
Hey Matt.
You defiantly do take the time to look at tons of videos and because of that, I wanted to say thanks for taking the time a few months back to look at my videos. I was the person in Denver who pulled out my iPad while you were waiting for your dead lift flight. You were extremely gracious in looking at my form and technique while preparing to go dead lift a house. Thanks!
Matt Foreman
Hey Mark,
Good to hear from you man. I remember our conversation and I hope the lifts are coming along.
Ryan
"Elbows high!" Helped me from looping.. I tell people that if "quack like a duck!" Works for you, keep it and I'll yell it to you at every meet haha
Duke
Thanks, Matt. This one made me laugh. I use the same mental cue to avoid pushing the bar forward on my jerks. Unfortunately, I found myself a bit distracted one evening while performing some heavy rack jerks. . . . I now have a visual cue (a nice scar on my forehead) to remind me to stay focused.
Kim
Ryan- Hah! that's pretty similar to one of my favorite coaching cues for snatching, that has helped me with looping. "Scarecrow elbows!"
John Colenberg
Love the tip. It's an issue I see more often than not. Definitely appreciate the information!
Niloo
I see for most crossfitters that neck tension is a major issue.
Athletic Culture
Steven
Four stitches in my forehead this week. I guess my timing was off