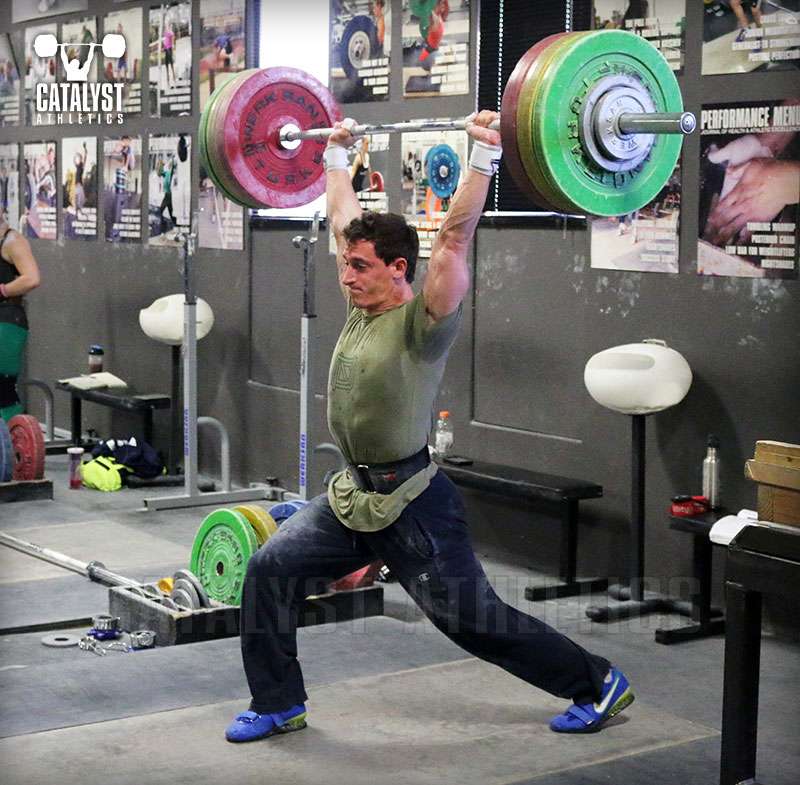 I used to train with a female lifter who couldn’t pick up a frying pan full of hamburger with one hand because her upper body wasn’t strong enough. If she was cooking and she needed to lift a skillet off the stove, she had to use both hands. She also held all the American records in her weight class and made eight or nine World Teams.
Upper body strength in weightlifting is a complex issue. Having strong muscles in your shoulders and arms is obviously important if you want to lift heavy weights over your head and hold them there. That’s a no-brainer. But with the Olympic lifts, you need a very specific kind of upper body strength, because the movements are so precise. We’re not talking about your Uncle Jethro lifting a dead cow into the back of a flatbed truck. We’re talking about snatching and clean and jerking.
I’ve heard a lot of questions about this area, so I think I’ll write this article by listing several of those questions along with some answers.

Bench pressing is a great way to develop upper body strength, but is it a valuable lift for weightlifters?

Most of you probably don’t remember this, but the US weightlifting community launched a little anti-bench press campaign back in the 90s. There was a whole line of t-shirts with slogans like, “We’re Olympic Weightlifters. We don’t bench.” For a while, being a weightlifter and telling people you benched was like admitting you had some kind of deviant pervert fetish.
The campaign died when we started seeing videos of top international lifters benching in training. I’ve personally seen Olympic medalists Simon Kolecki, Evgeny Chigishev, and Oksana Slivenko benching huge weights. Hell, I once talked to a former Canadian lifter who told me he was at an international meet in the 70s where he missed some snatch attempts, and David Rigert told him that he needed to start benching because his upper body wasn’t strong enough to hold the snatches overhead.
Does this mean benching is mandatory, and all great lifters do it? Nope. Nicu Vlad told me he never did them. I never did them in my prime, and neither did any of my teammates who were making world teams and breaking American records. Benching isn’t a requirement for success, but it can definitely help certain lifters and it’s clearly NOT the Black Plague. The bench press develops a stronger shoulder girdle, which is hugely helpful to an athlete. But the movement is still a forward push, which doesn’t transfer directly into the overhead lifts.

Does overhead pressing strength directly equate to the jerk?

Not really, no. Jerking is mainly about lower body power and hitting efficient positions. I was a very good jerker, and my overhead pressing strength was nothing special. Wes Barnett once told me his best strict military press was “maybe 105-110 kilos” and he had a 220 kg C&J at 108 bodyweight.
Lifters who have tremendous pressing strength before they start training the Olympic lifts can sometimes have problems when they’re learning the jerk because they tend to “muscle” the bar overhead instead of using their legs correctly. This can lead to technique problems that might last a long time.
But if your jerk technique is solid, big pressing strength certainly isn’t going to hurt you. If you’re a weightlifter, it’s like keeping an M-60 machine gun under your bed for home defense. You might not need quite that much firepower, but just in case…

How much upper body strength work is typically used by elite weightlifters?
There’s not a universal answer to that. We see a lot of exercises being performed by elite lifters in Europe and Asia. Some of them are pretty standard stuff (bench press, push press), and others are really unorthodox.
Ever since YouTube started, our sport has developed an entire generation of people who think their training is going to improve if they copy all the assistance lifts and variations they see in the training centers of Russia, China, etc.  Listen, there’s something you need to remember about this situation. These elite lifters we’re watching on these sites are professional weightlifters with practically unlimited training time. They can incorporate tons of exercises into their regimen simply because they’ve got lots of time to do them and (this is the important thing to remember) they’ve already mastered their snatch and clean & jerk technique during the 10-15 years of training they’ve put in. If you’re a busy American adult with a job who hasn’t even solidified your technique in the basic Olympic lifts yet, you probably don’t want to pack your week with a ton of specialized assistance exercises. If you suck at the competition lifts because you’re spending most of your training time on a bunch of wacky stuff you saw on YouTube, you’re not managing your program effectively.
What are some of the best upper body strength exercises for OLifters?
In general, it’s a good idea to stick with lifts that mimic the positions of the snatch and clean & jerk. A few of my personal favorites are here:
These aren’t original or revolutionary. You’ve seen them before. I’m just reaffirming their effectiveness. Bodybuilding stuff has its place (curls, tricep extensions, dumbbell work, etc.) for people who have a basic deficiency in upper body strength. However, it can also be a major hindrance for people who already have tight, muscular upper bodies (loss of flexibility).
Front squats are tremendously important for developing upper body strength. A lot of people don’t think about this because the arms and shoulders are staying immobile during the front squat. The thing you have to remember is that the entire upper body musculature is contracting during this lift. The athlete’s POSTURE is being strengthened, which is why it’s important for this lift to be done with a disciplined front rack position (wide spread of the chest, upright torso). If you let yourself do rounded turtleback front squats with fingers popping off the bar, you’re not getting maximum benefit from the lift.
And remember, absolutely everybody thinks it’s awesome to have a muscular upper body. I know we’re weightlifters, so we all worship traps, quads, and asses. But at the end of the day, there’s a little part of our soul that loves having big guns, delts, and pecs. It’s human nature. So don’t be afraid to explore your upper body training regimen. It’ll make you a better lifter, and people will be more physically attracted to you, which is what this whole thing is really all about anyway.  Personally, I’ve always considered my hotness the #1 priority.

Stuart
This is amazing. I have just recently discovered o lifts and love them. I subscribe to the YouTube channel and love it. But I must agree, keeping flexibility and mobility, upper body training is only going to help the mind-muscle neurological connection. The command and control aspect of contraction for strength as well as power.
Elisabetta
For a starting lifter, how much time would you dedicate to the main lifts bs assistance? Roughly, I know it depends on many factors.
Depends on how you classify assistance, which is also vague. In 2 hours of training, maybe 30-45 min of non-barbell work.

Greg Everett
Tim Pashe
Idk if you'd recommend this but something that's been working pretty well for me is doing push presses with a slow eccentric/negative press. It stimulates shoulder strength and hypertrophy pretty well and it can help to reinforce leg drive since after a set or two your upper body is going to be pretty burnt out