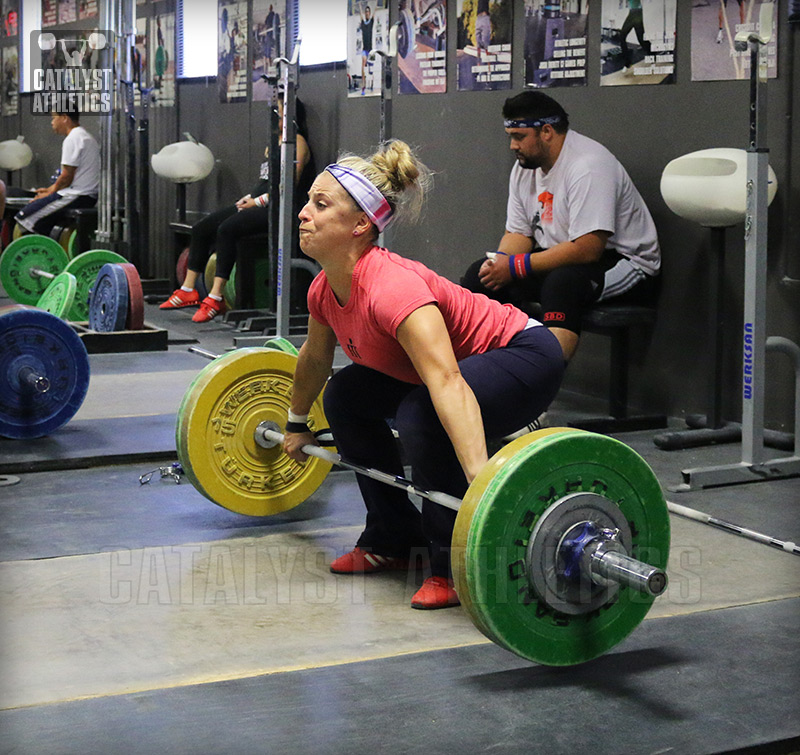 Now that weightlifting has progressed to the point where people are overanalyzing pulling technique like they’re trying to split the atom with an animal cracker, I think we need a simple look at a simple difference in lifting styles that should lead us to a simple conclusion. And after we’re finished, we can sit back and watch while it gets kicked to death by the internet hordes.
Here’s a video for you to watch. The lifter is Kim Tuan Thach from Vietnam, one of the top 56 kg (123 lbs) lifters in the world. Kim is snatching 130 kg (286 lbs) in this video. Go ahead and watch it a few times to get all the oooohs and aaaaahs out of the way. After you’ve seen the whole thing and calmed down, I want you to watch the first 7 seconds of the video. Use your clicker and watch it a bunch of times. Specifically, take a look at what’s happening with his legs and hips as the bar comes off the floor. As you can see, he’s got a pretty dramatic butt-coming-up-and-shoulders-tilting-forward technique. When the bar reaches the top of his kneecaps at 6 seconds, he’s pushed his knees back quite a bit, causing his hips to rise and his chest to tilt forward over the bar. Make sure you’ve watched it enough to familiarize yourself with the movement.

Now I’ve got a second video for you to watch. In this one, we see everybody’s favorite, Tatiana Kashirina from Russia, snatching 155 kg (341 lbs), which is the world record in the women’s division. After you’ve picked your jaw up off the floor and developed a feeling of insecurity about the size of your testicles (male-specific), take a look at the first 6 seconds of her pull, the same way you did with Thach. Her movement is noticeably different as she pulls the bar past her shins. She doesn’t push her knees back and shoot her butt up in the air as much as he does. When Tatiana pulls from the floor, it’s more of a straight-push movement where her hips and shoulders rise simultaneously. You should be able to see the difference in technique between these two lifts. If you can't see the difference, you need to do what I've been doing my whole life...go back and watch them both 10,000 times until you see it.

The main point we’re trying to establish is that these two athletes have different movement styles when they pull their snatches from the floor. Got it? Needless to say, some of you are looking at these two styles and asking yourself, “Which one is correct? Which style is the best one for lifting big weights?” Those are the questions I want to take a look at.
First of all, here are a couple of things to say, right at the beginning:

1) These are both elite athletes. They’re the best in the world. That should tell us both of their movements are effective. If we were comparing the technique of an Olympic champion with some idiot flailing away in a garage somewhere, that would be different. But the level of accomplishment of these two athletes should lead us to the understanding that neither one is right or wrong. They’re both right.

2) Over the years, I've seen many examples of both these styles. If you watch enough weightlifting at the highest levels, you’ll see plenty of athletes who move like Thach and plenty of athletes who move like Kashirina. Neither of these are freaky one-in-a-million examples of movement. Each one is frequent among the top competitors in our sport.
The next question is how did they develop these differences? There are two possible answers to this:

A)   They were deliberately taught to move this way by their coaches. We don’t know the entire back story about the technical development of these two lifters, so there’s a possibility that their coaches used different teaching progressions to carefully sculpt and build their pulling technique until it looked exactly the way you see.
B)   They were taught to pull the bar in a standard way, and these movement differences just developed on their own as the athletes grew, matured, and progressed. Thach might have been taught to pull the same way Kashirina was taught. But then he might have naturally started moving his legs and hips in the way you see here because that’s just what felt right and made the most sense to him as an athlete. A lot of this has to do with individual body proportions and limb length too.
Throughout my career, I’ve seen several variations of both these possibilities. I’ve seen coaches who intentionally tell lifters to push the knees back (as you see with Thach) when they pull from the floor. I’ve also seen coaches who don’t tell lifters to push the knees back, focusing more on the movement of the hips and shoulders, thereby letting the push-back knee movement just happen on its own, to whatever degree suits that particular athlete.
Personally, I’ve seen fewer coaches in my career who teach the push-the-knees-back technique. I've seen some of it, but it hasn’t been the majority. I generally prefer the more standard “push off the floor with the hips and shoulders, and the knees will move on their own the way they're supposed to” method, like you see with Kashirina. I teach like this, and I think like this as an athlete. I also believe you see more Kashirina-type technique at the highest levels than Thach-type technique.
Besides, the most important issue is the position of the bar when it reaches the hip joint. If you pause Kashirina’s video at 7 seconds and Thach’s at 8 seconds, you’ll see almost identical positions as the bar comes to the hips and they get ready to explode and extend upwards. THIS is the position that matters most. You can get to it any way you want, but you have to get to it and it has to be solid as granite.
This article is simply an examination of diverse movement types in weightlifting, with the understanding that different variations can be used effectively. I’m not contradicting anybody, so there's no reason for stupid argumentative comments (although I'm sure we'll see them anyway).
Any weightlifting coach who says there’s only one technical way to be successful is wrong. There’s just too much evidence out there to prove otherwise.

Fred
I honestly don't think weightlifters are over analyzing the pulls, i think those idiots from crossfit are trying to make something simple, difficult. Which seems to be their selling or marketing scheme now a days.
It's being done by a lot of new weightlifters and weightlifting "coaches" these days too, unfortunately. More problematic is the claims of right and wrong rather than acceptable variation (yes, some things are unquestionably wrong), and constant creation of false dichotomies to create conflict and sell products and services.


Greg Everett
Cori
I enjoyed reading tho article and watching the videos. Before I read the second part of the article I did notice that the powerful part of the pull was at the hips with both athletes. Amazing. I couldn't have read this at a better time, this is very helpful. And for Fred and his CF comment. Why would you care if someone else is trying to learn the sport and art of Olympic weightlifting? Whether they do CrossFit. Gymnastics or Zumba there shouldn't be any animosity with others wanting to learn, practice and improve their skills in the sport. Or maybe everyone else is just an over analyzing idiot except you.
Dan
What' the best way to train the hip explosion? My lifts tend to be "not finishing" and diving to soon... Thanks!
Work on getting tall and extending straight. Snatch High-Pulls and snatches from the hang may help get this corrected.


Steve Pan
Garrett F.
Would this type of first initial pull have to do with how far the knees are in front of the bar and how low the hips are? It seems that in order for Kim to move like Tatiana, he would somehow have to get the bar AROUND his knees... At which point the knees would still be bent way to far into the sequence of the snatch. Am I wrong in thinking this has a lot to do with the literal position of hips and knees at the start?
Zeexer
It's really the start position that's different, isn't it? Thach is much more upward at the start than Tanya, but their position is identical not only when bar is at the hip, but also at the beginning of hip extension phase when bar starts clearing the knees (6 sec for Thach and 5 for Kashirina) - the back angle, shoulders, shins, feet - all the same.
Can Thach simply be more back/glute/hams dominant and performs better with pulling rather than pushing? Also could clearing knees be an issue due to proportions, making it necessary to push knees back in order to accelerate faster?
Matt
Both lifters get lift from the hips, getting there is different because of training. You could analyze the floor to hips as much as you like. There are a lot of variables in different lifters. The speed and explosive lift from hips is very similar.