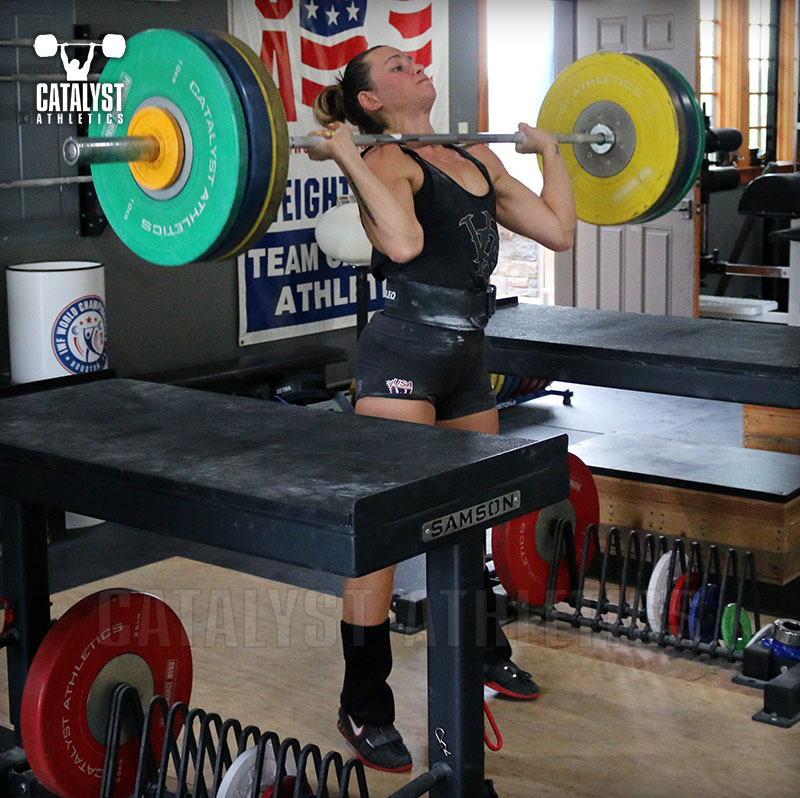 See more articles & videos like this in the The Jerk Dip & Drive collection.
In all three competition lifts, the timing of the transition between the upward extension and drive of the lower body to the pull or push under the bar by the upper body is a critical element of optimal lift technique, as well as a point of confusion for many athletes.

The jerk tends to get less attention in discussions of weightlifting technical matters, but it deserves as much consideration as the snatch and clean—maybe more because of its historical lack thereof.

The answer to the timing question can be answered in terms of bar speed or leg extension. The simple answer is that the arms should begin pushing against the bar when it reaches its maximal upward speed in order to preserve that speed as much as possible and achieve maximal height as a consequence. Of course, that begs the question of when that maximal speed is reached.

Generally the entry-level advice for the jerk is to begin pushing with the arms when the legs have completed their extension—this is what I will tell beginning lifters in most cases to keep things simple. However, this needs to be refined to be perfectly accurate. The arms should begin pushing when the legs have completed the degree of extension at which they’ve produced maximal speed on the bar. When is this? It depends on the style of jerk.

As I’ve written about previously, I split jerk technique into two categories: strength and elastic. These categories describe what the lifter relies on primarily to accelerate and elevate the bar in the drive of the jerk: strength or elasticity. Keep in mind that both are being used in all jerks; what changes are the relative degrees of each. This is also not an either/or matter—lifters will exist on a spectrum between these two ends with varying mixes of both.

This being the case, the more strength-reliant the lifter, the later in the extension of the legs the bar will reach maximal speed; accordingly, these lifters should begin pushing with the arms later in the drive, as the legs are reaching complete extension.

The more elastic jerker should begin pushing with the arms sooner in the drive to match the earlier timing of the barbell’s maximal speed, which will precede the complete extension of the legs. However, this does not mean that these more elastic jerkers should not complete the extension of the legs in the drive—they should follow through with this extension to continue elevating the bar (just as in the snatch or clean where maximal speed is typically achieved before complete extension). The difference will be the activity of the arms during that final portion of the extension.

How do you determine what you need to do? Generally you’ll gravitate naturally to the jerk style that best suits you simply because it will feel most effective to you. If you’re not sure, consider your explosiveness in general—if you’re a quick, snappy lifter with a big vertical jump using a standard countermovement, you’re probably going to be more of an elastic jerker; if instead, you’re a bit slower (but still could be very strong) and aren’t a big jumper, you’re probably going to be more of a strength jerker.

The best way to know is to experiment with jerks themselves. Just like in any lift, you’ll know when you do it well because you’ll feel the bar fly. More specifically, experiment with power jerks in the 70-80% intensity range—this will allow you to really feel the elasticity and height of the drive—trying varying dip speeds, depths, and timing of the arms.

See more articles & videos like this in the The Jerk Dip & Drive collection.

Joshskies
Concerning hand positioning, looking at the your athletes, the bar is firmly held in the metacarpals. Watching clips from this current olympics (2016), Nurudinov and many other athletes balance the bar on their shoulders, with the bar supported by their phalanges - or using a monkey grip - which they then flip up after doing their dip. I could see it being used most regularly with an elastic jerk, but a strength jerk (which I primarily use) almost require a full grip

Any comments on hand position? Or is it specific to the athlete?
Thanks bud
Josh
How far under the bar the athlete can get the hand and where exactly the elbows can be depends on that athlete's proportions primarily - a significant disparity in upper and lower arm lengths will force a fingertip rack position. In the video you reference, you can see how long his lower arm is - no way he's not getting his palms under the bar.

Read this article for more

Joshskies
Thanks for the insight! I was instructed that wrist and lat mobility alone control the grip position, but it makes logical sense that anatomy has a big influence on it as well. This whole time, I've been trying to break my wrists to get them into the right position.
Rick
You should push with your arms as soon as the bar leaves your shoulders !! This is very simple stuff , you are trying to make it to complex when it is NOT !!!
Rick
Also when you clean the weight you will feel the natural position for your body , it comes together with experience and a lot of time preforming the proper technique !