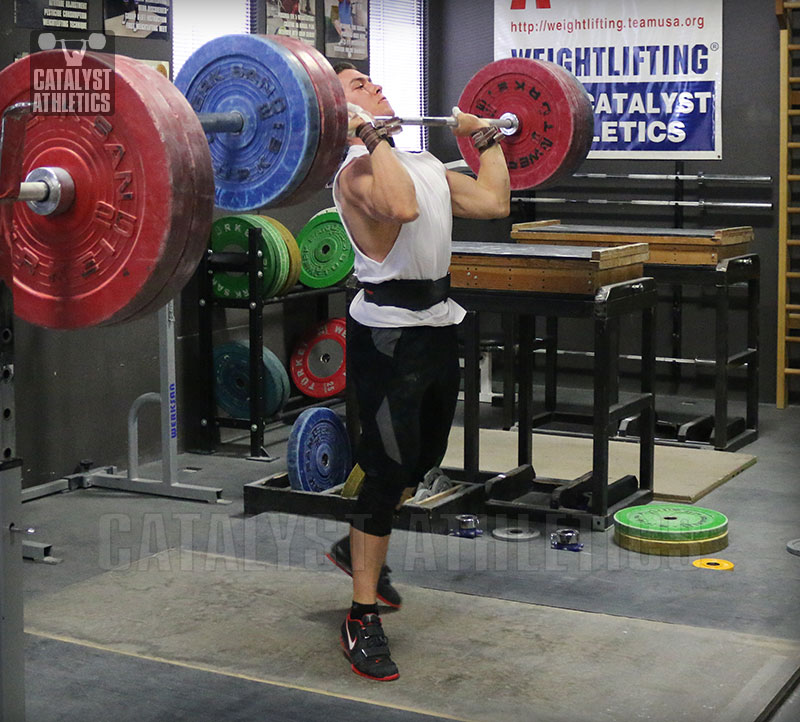 See more articles & videos like this in the The Jerk Dip & Drive collection.
There are technical variations of the competition lifts that are rooted in the actual physical characteristics of the lifter rather than ideological or pedagogical differences. One of the most dramatic ones is the nature of a lifter’s dip and drive in the jerk. I call the two categories (which are really the two ends of a spectrum) strength and elastic as they’re decent descriptors of each.

Each athlete will naturally demonstrate the characteristics of one or the other to varying degrees, and some may be fairly balanced, falling near the middle of the spectrum. Unless instructed to try to lift in a specific way, each lifter will naturally gravitate toward the style that best utilizes his or her given abilities.

The elastic jerk is characterized by a reliance primarily on the elasticity of both the legs and the barbell to accelerate and elevate the bar. This type of jerk will have the following qualities: In other words, this jerk will have a shallow dip, a quick, abrupt dip and drive rhythm, and the lifter will not continue driving upward as long because the bar speed will reach maximum sooner during the drive—the goal is to begin pushing with the arms when the bar reaches maximal speed, hence the earlier engagement of the arms in the elastic jerk. Note that the elastic jerk also relies on the elasticity of the barbell, so the effect increases along with the weight, and the barbell won’t contribute noticeably with light weights.

The strength jerk is characterized by a reliance primarily on leg strength to elevate and accelerate the bar. This type of jerk will have the following qualities: This jerk will have a deep dip, a slower dip and drive rhythm, and the lifter will have to continue driving longer with the legs to achieve maximal bar speed, requiring a later engagement of the arms to match this later maximum speed.

As I mentioned previously, lifters will naturally gravitate toward the style that best suits them unless there is interference from a coach or that athlete believing they need to perform the lift in another way. First, keep in mind that this is a spectrum—a given lifter is not always clearly one or the other, and in consequence will have a jerk style with elements of each category.

As you train, pay attention to the jerks you do that feel the best—How quick was your dip? How deep was your dip? How soon did you start pushing with your arms? What was the rhythm of the dip and drive like? These are your clues to figure out how you need to be jerking.

You need to train to support the type of jerk you're built best for by training the according timing and rhythm, and using the appropriate choices of accessory and technique work. All lifters will benefit from improving their elasticity in the dip and drive, but a true strength jerker will never convert entirely to a true elastic jerk. Exercises like countermovement jump variations, jerk dips, jerk springs and rebound jerks can help develop these elastic qualities.