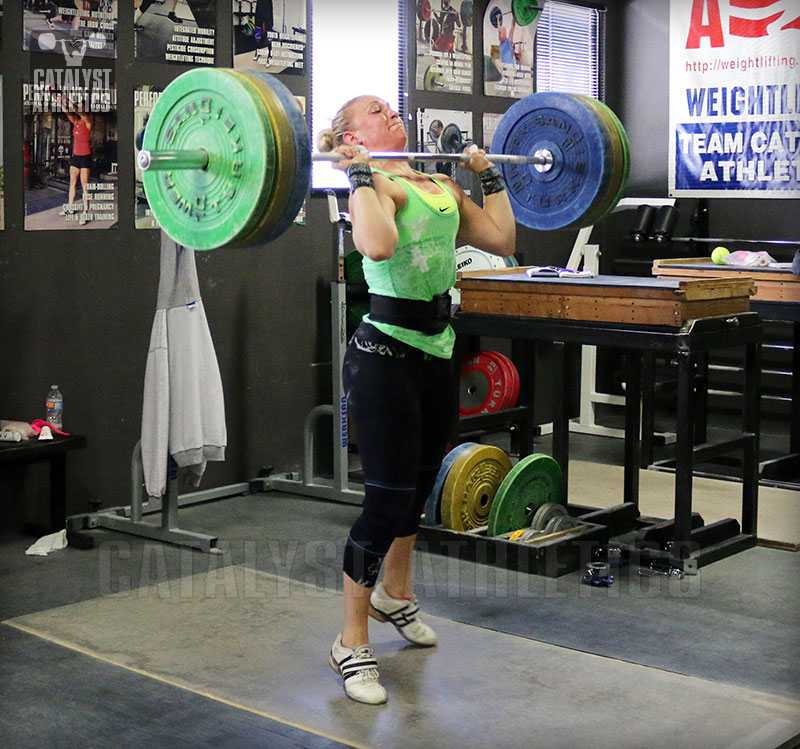 See more articles & videos like this in the The Jerk Dip & Drive collection.
The starting position of the jerk concerns two primary elements: the stance of the feet and the rack position. Each can have dramatic effects on the lift, and each will vary somewhat among lifters based on individual peculiarities. Additional but more minor elements will also contribute to the success or failure of the lift.

The starting point for the position of the feet places the heels at hip-width or slightly wider to orient the legs approximately vertically and the toes turned out approximately 10-20 degrees relative to the centerline. 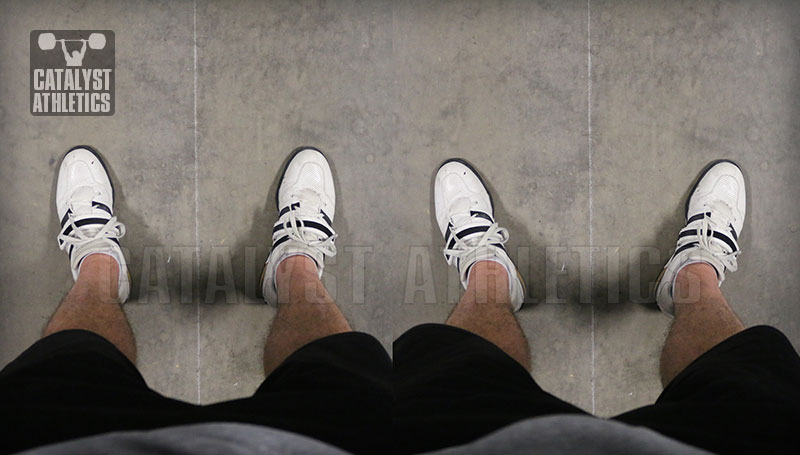 A vertical leg orientation in theory allows maximal force to be applied to the elevation of the bar, as the force generated by the leg extension will be directed straight down against the ground and straight back up against the barbell with none lost to horizontal displacement. Additionally, a vertical leg orientation will create the highest possible elevation of the barbell when the body is in an extended position simply by virtue of the lifter’s height.

However, other factors must be taken into consideration: primarily, the ability to brake in the bottom of the dip abruptly and powerfully. This is actually more important than the benefits of a perfectly vertical leg orientation, as this dictates the lifter’s ability to generate the maximal elasticity, both of the barbell and the body, to create the most upward acceleration on the barbell in the drive of the jerk. The maximal height in the extended position and perfectly direct force application will not overcome an inability in that stance to execute a quick dip and an abrupt stop and change of direction.

Ultimately, just as is the case with the pulling stance of the snatch and clean, the drive stance of the jerk needs to be adjusted to best suit each athlete’s build, strengths and weaknesses, which will require some experimentation. Generally speaking, athletes with weaker and/or longer legs will find a wider stance more effective.

You can experiment with different stance widths and degree of toe-out (always remembering that the knees should move in line with the feet as you dip) with jerks themselves to find what feels best, but also with things like jerk dip squats, jerk dips and jerk drives to feel what’s strongest for you in the bottom position with heavy weights.

Read a lot more about the jerk in Olympic Weightlifting: A Complete Guide for Athletes & Coaches by Greg Everett

Austin
So to sum up the vertical leg orientation quandary, if I'm able to reverse more powerfully out of the bottom of my jerk dip when I initiate it with a slightly bent leg at the top versus a completely straight one, this is fine? Any idea why this might be the case? Thanks for another great article.
You want to initiate the dip with the knees unlocked and tension already on the quads - not bent, but not hyperextended. If you start from a passive knee lock, you'll freefall momentarily until your muscles take up the slack, which means the bar can lose connection with your shoulders, position can shift, and balance can shift (usually forward) - so you always create tension before you start. I wrote about this in this article.