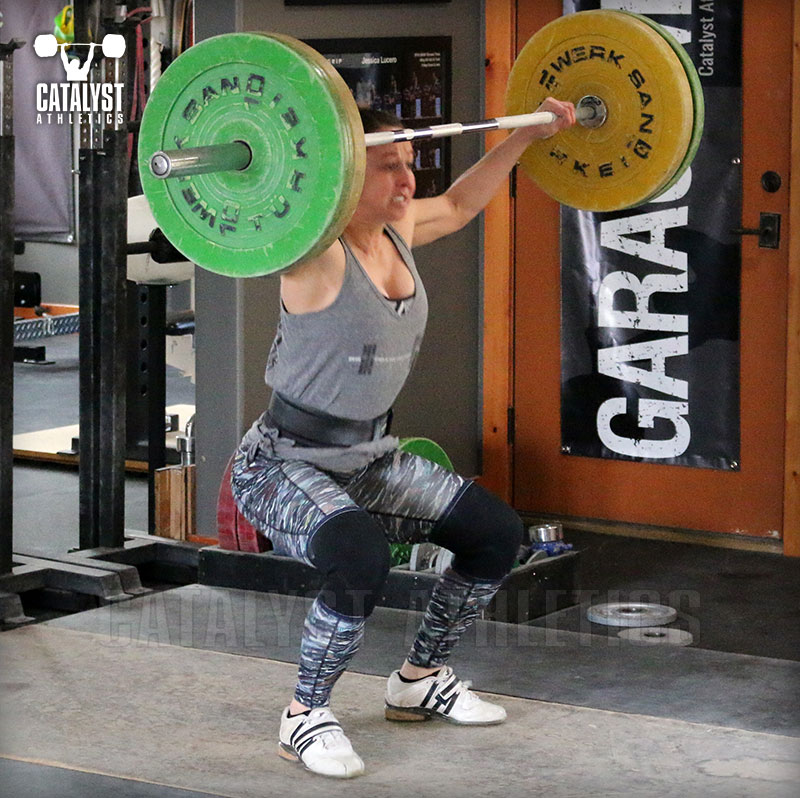 The basic movement of the third pull of the snatch is simple: the elbows need to move out and up toward the shoulders, reaching approximately shoulder height (usually slightly below), before the arms are turned over, and during this turnover, the elbows should remain at the same height relative to the shoulders and then continue moving up—they should never drop from this level during the turnover. (Note that this elbows high and out position is often misrepresented as the elbows being forward over the bar, which is incorrect; they do move backward as well, but primarily upward.)

The purpose of the muscle snatch is to strengthen the turnover and reinforce proper mechanics; if the movement diverges from the motion used in the third pull of the snatch, its effectiveness is reduced if not eliminated entirely.

Pulling the elbows high before turning the bar over isn’t some obsolete lifting technique from the olden days as some these days love to claim as if abundant evidence to the contrary isn’t readily accessible (I was once told that “elbows up is dead”, as if we were talking about fashion). We can look exclusively at elite lifters from 2016 competitions to see these same third pull mechanics described previously. I’ve used examples of both men and women from China, North Korea, the US and Russia (Russia is particularly edifying since Russian lifters very often perform the muscle snatch the way I’m asking you not to, but as you can see in the accompany lifts, they perform the third pull of the snatch the same way I describe as being correct, which is exactly the basis of my objection).

Just so you know I'm not making this all up to confuse you, let's take a look at this convenient video before we proceed:


The purpose of the muscle snatch is to strengthen the turnover and reinforce proper mechanics; if the movement diverges from the motion used in the third pull of the snatch, its effectiveness is reduced if not eliminated entirely. I consider a muscle snatch successful only if the elbows never drop from their highest point prior to the turnover.

Unfortunately, the majority of muscle snatches are performed with an often dramatic drop of the elbows before the arms are flipped over, or with the turnover occurring prematurely before the elbows reach an adequate height, in both cases with the trunk leaned back for nearly the entire movement, changing the motion completely from what occurs in the snatch. While this snatch-grip clean and press may be an impressive feat of strength, it contributes little to improving the snatch itself because of its divergence from the very movement it’s intended to strengthen and reinforce.

Of course there are exceptions to this basic motion of the third pull for the snatch that I’m sure one of you angrily industrious folks can find on the interwebz, but they’re exceptions—exceptions and a fraction of the world’s elite lifters are not the ideal models on which to base your lifting mechanics.

If this same movement is performed in the third pull of a snatch (i.e. the elbows drop prior to the turnover), there is a necessary disconnection between the lifter and barbell. In other words, there is a moment during which the lifter is not applying force against the bar, either pulling or pushing against it, and this disconnection reduces the lifter’s control over the position and movement of both the barbell and his or her body. This can reduce speed, create unwanted changes in position and balance, and create crashing of the bar into the receiving position.

I realize many elite lifters do exactly what I’m saying not to do in the muscle snatch… I will continue to argue that they’re successful in spite of this, not because of it. In many cases, the effectiveness of an exercise might be reasonably argued, but in this case, as long as we agree on the purpose, I see no legitimate argument on the other side other than “some good lifters do it.”

Below are just a few examples showing the elbow movement in the third pull of the snatch (Arthur - US, Long - China, Getts - Russia). All examples are from 2016 so there's no confusion about "elbows up is dead" in this brave new world. How to Do It

If I’ve convinced you to change your ways instead of just making you hate me and dig your heels in even deeper, you probably want to know how to actually do the muscle snatch this way. Keep it simple conceptually—never let up on pulling against the bar until you’re in the final position to punch it straight up into the overhead position. It often helps to imagine performing a snatch high-pull and then simply following through with a turnover into the overhead position.

In other words, exaggerate the effort to lift the elbows high, and keep pulling the elbows up even as you’re turning the bar over. If you focus on pulling up and maintaining constant tension against the bar, your elbows won’t flip under it and you won’t begin the turnover too early. Pull them up and out, and then back as you turn the bar over to keep it close, still focusing on elevation.

A good place to start is by performing a tall muscle snatch with an empty barbell—just stand upright with the bar at arms’ length and use only the upper body to lift the elbows up and out, then squeeze back as you turn it over, and punch straight up over the back of the neck into the overhead position. This will greatly simplify the movement and allow you to more easily maintain constant tension since the bar will have virtually no momentum as it comes through the turnover.

If you’ve been performing the muscle snatch incorrectly, not only will it take time to retrain the movement, but you’re going to have to accept a reduction in loading at least during this retraining process. This shouldn’t be a concern, however, because even at a fraction of your previous muscle snatch weights, the proper movement will actually make the muscle snatch an effective exercise for improving the turnover of the snatch rather than just a party trick.

(Note: Some people teach the muscle snatch without contact against the body; I consider this a different exercise, the snatch long pull)

Kyle Mikami
I really hope this will help increase the weight I can snatch! I haven't been doing snatches completely correct so just a little change should improve how much I can lift.
Lukas Eklund
Maybe the Chinese use the muscle snatch for a different reason? I've heard people say they use it to work on the second pull more than the third.
Using the MS to work on the second pull would make no sense at all so I have a hard time believing that's the case.

Greg Everett
Sam Gonzalez
If elbows should reach shoulder height while snatching, how high should they get while cleaning?
You should still get your elbows to shoulder height. Here is an article that you might find helpful for a better clean turnover.