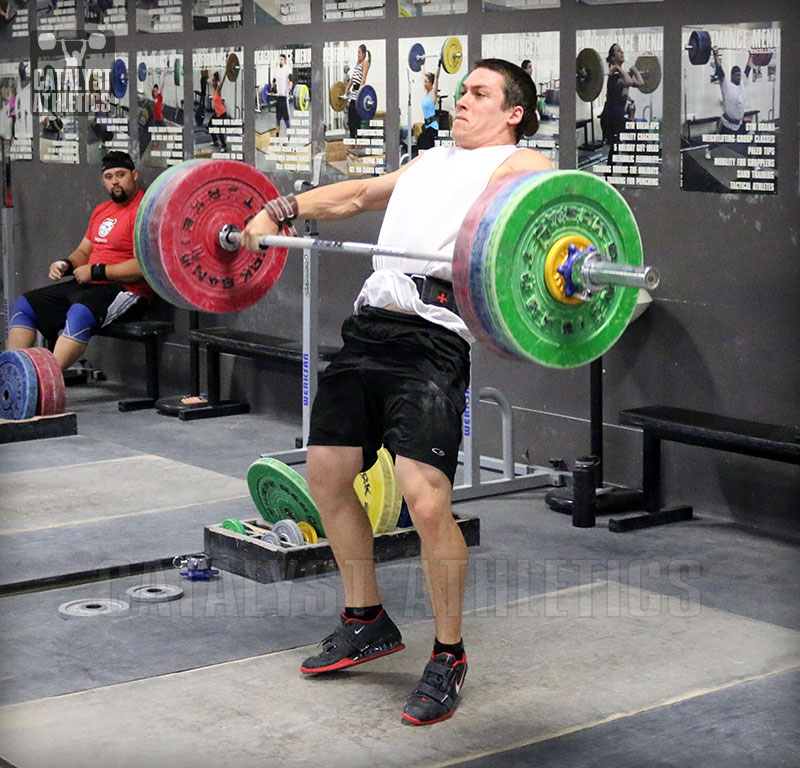 See more articles & videos like this in the Snatch & Clean Second Pull collection.
I assume other sports share the same characteristic, but weightlifting seems to be continually split into contrary groups of thinking, representatives of which often seem to thrive on going to battle over the details rather than recognizing the commonalities, which are usually abundant and far more important. One of the splits that fascinates me is that of the relative importance of the second and third pulls. One group insists that the priority is accelerating and elevating the bar upward while the other group instead claims that it’s more important to get under the bar. (Keep the terms “jump-shrug” or “catapult” out of this conversation—these are representative of misinterpretations and misrepresentations that just confuse the issue.)

Further, there are those who like to claim that certain countries emphasize one or the other despite no shortage of evidence to the contrary—for example, that European and Eastern European lifters focus more on pulling under the bar than we Americans, despite the fact that thanks to the internet, we see these very lifters teaching things the exact same way as many of their American counterparts (such as the dreaded elbows up and out position during a learning progression). We’re a very confused, angry bunch.

The reason I find this argument so interesting is that, from my perspective, you can’t genuinely choose one or the other; and even if you could, why would you not make the effort to capitalize on both? Why would you ever limit yourself by choosing to not maximally exploit every element of the lift that has the potential to get you under more weight?

In the snatch and clean, the goal is to get the bar overhead or onto the shoulders; in other words, the lifter has to relocate the body under the bar. This requires that the barbell moves up and the lifter moves down—on those two points, there can be no legitimate argument.

This means that if the barbell goes higher, it’s easier for the lifter to get under it (due to both more space and time); similarly, if the lifter gets lower in less time, it’s easier to get under a barbell at any given height. It’s a pretty straightforward proposition in my mind—if you can elevate and accelerate the barbell more and move yourself more quickly into a lower position, you’ve maximized your ability to snatch or clean (or jerk) as much weight as possible.

...if you can elevate and accelerate the barbell more and move yourself more quickly into a lower position, you’ve maximized your ability to snatch or clean (or jerk) as much weight as possible.

Intentionally limiting the elevation of the bar in order to focus on the movement under it makes no sense when you consider it in those terms—a lower ultimate barbell height means less time and space for a body to get under it. The heavier the bar, the more quickly it will stop moving upward under the generated momentum and begin falling; more acceleration and more elevation will mean a lifter can get more weight into a position and acting in a way (i.e. not falling too soon) that allows him or her to get under it.

The problem, or one of the problems, is that I see this idea of wanting elevation of the barbell misinterpreted or misunderstood as necessarily meaning that the lifter should continue pulling for an hour and never move under the bar (e.g. trying to shrug the bar up). This of course is nonsense and such an idea shouldn’t be attributed to everyone who doesn’t flat out agree that pulling under a bar is the only thing that matters. In no way does the desire to get maximal elevation of the barbell imply any specific timing or even motion—it implies an effort to impart maximal upward force on the bar.

Any delay in the extended position at the top of the second pull is time lost to move under the barbell. Again, accelerating and elevating the barbell maximally does not mean pulling forever and hanging out at the top of the pull—it means making the effort to drive against the floor with the legs and open the hips in concert to create both speed and vertical elevation for the express purpose of creating an opportunity to move under the bar.

This is different from what occurs in a snatch pull or clean pull—in these exercises, the barbell is pulled as high as possible with the lifter remaining in an actively extended position until the bar stops moving upward (Yes, I know there is more than one way to perform these exercises—we’re talking about the most common). In an actual snatch or clean, the elevation effort is the same, but the lifter breaks from the extended position sooner to move under the bar, but that’s the key—the effort to elevate the bar is the same.

A final consideration is that, while we often break the lifts into pieces for the sake of teaching or analysis, e.g. first, second and third pulls, a properly executed lift should be a single continuous action. In particular, the second and third pulls should be a seamless, continuous effort—the second pull feeds directly into the third pull. There should never be a moment in which the lifter is not either actively moving the bar and body upward, or actively moving down under the bar—never a moment when the lifter is hesitating, floating, relaxing, or any of those other things that have no place in the snatch, clean or jerk.

Read much more about this topic in Olympic Weightlifting: A Complete Guide for Athletes & Coaches by Greg Everett