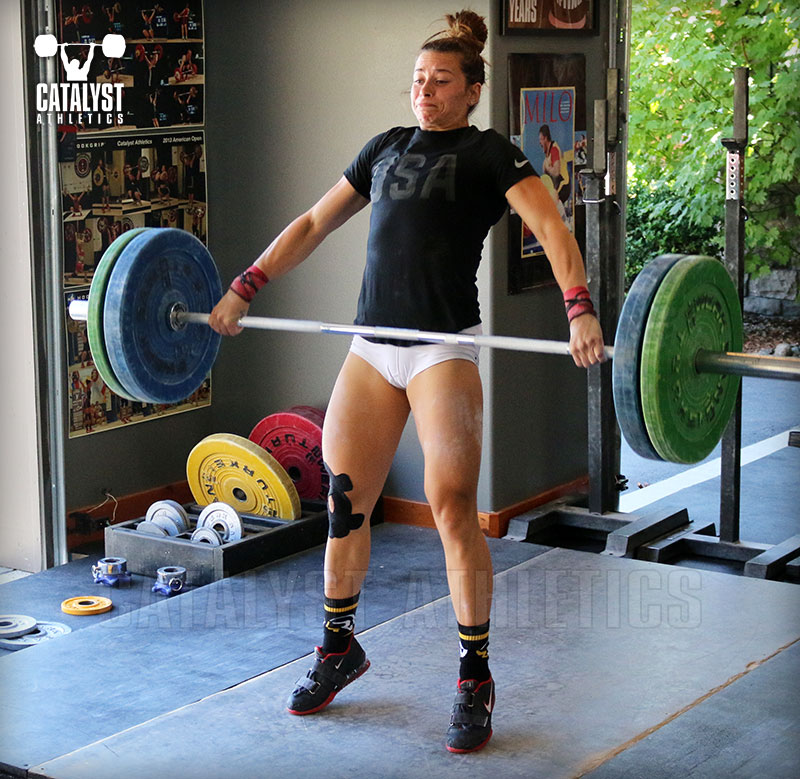 You’re all trying to figure out the right way to move your bodies when you perform the Olympic lifts, which very often feels like you’re trying to chip through the pyramids of Egypt with a plastic fork, so let me toss you a little technical cue that might help.

People talk a lot about how your feet are supposed to move when you do the snatch and clean and jerk. I’ve already written articles about the issue of lifting your feet off the ground when you’re jumping down into the bottom position during the turnover (also see this article), so that’s not what I want to focus on here. Instead, let me give you a little input about where you should feel your bodyweight in relation to your feet while you’re doing the OLifts.

One of the cues I’ve used successfully with athletes in the past is “MIDDLE-TOP-MIDDLE.” So let’s explain what that means. I’ll take you through it step by step.

MIDDLE: When you pull the bar from the floor, you should feel your bodyweight in the MIDDLE of your foot.

TOP: When you drive up into the finish of the second pull, you should extend up to the TOP of your foot (your toes).

MIDDLE: When you jump down and land in the bottom position, you should once again feel your bodyweight in the MIDDLE of your foot.

Okay… so let’s add some more ideas before this gets completely misinterpreted, misunderstood, and misrepresented. (those of you who generally like to read the first half of an article and then post foolish comments about it without reading the whole thing can skip the rest of this and resume your regular schedule of being a boil on the ass of the world)

MIDDLE: In my almost 30 years of doing the Olympic lifts, I’ve always believed the athlete should try to pull through the middle of the foot during the first pull (from the floor to slightly above the knees). And the phrase “middle of the foot” doesn’t need to be overanalyzed. Just think about your foot and find a spot somewhere halfway between your toes and your heels. Don’t paralyze yourself by trying to narrow it down to a fraction of a millimeter. Just be a damn athlete and figure out a ballpark spot that feels right.

I know there are some people who like to talk about sitting back on your heels during this phase, but I honestly don’t think that’s the right way to do it. Sure, I know there are some lifters who need to be told to sit back on their heels during the first pull because they’ve got a problem with lurching forward onto the toes right off the floor and the “shift back on your heels” cue is an attempt to correct the problem. I get that. I also know not all athletes move the same, and there are some highly successful lifters that might move slightly different from the way I’m describing. I get that too. There have been a few world-class lifters who actually rock back on their heels when they’re in the middle of the pull before shifting forward in the finish. Those are exceptions, and I’m not talking about them. I’m talking about a very general, basic, this-works-for-most-people way of describing the lifts.

TOP: I believe in extending high up onto the toes when finishing the upward pulling movement of the snatch and clean. I use the word “jump” quite a bit. I think there are enough examples of this kind of movement at the top of the sport to support the idea that this is the right way to do it, for the majority of athletes. I’ve also written about the difference between flat-foot pulling and toe-extension pulling, so we don’t need to go down that rabbit hole at the moment. In a nutshell, I think most lifters will have the greatest success if they drive to the TOP of their foot when pulling at the finish of the OLifts. If you disagree, I respect your opinion. But you’re still wrong.

MIDDLE: Lots of newcomers land on their toes when they start to learn how to jump down into the bottom position, which causes failed lifts. I think jumping down to the middle of the foot is the right way to properly stabilize the bar into the overhead position (snatch) or rack position (clean). If you think about landing on your heels, there’s a very strong chance your shins are going to tilt straight up, which causes your whole body to rock backwards, which is not the situation you want to be in during a snatch or clean. Just stand up right now and stomp your feet on the floor, trying to make a SMACK! noise when they hit. That’s what we’re talking about.

As I always say, there’s no technical cue that’s going to work equally for everybody, including this one. It might help you, and it might not. Everybody is not the same. You got this for free, so don’t complain.

These thoughts are based on a lifetime of trying to figure out the most effective way to do this sport, with a lot of trial, error, and analysis along the way. Even if this sounds fishy to you, it would still behoove you to think about it and maybe give it some experimentation. I didn’t jump in this game yesterday, folks.