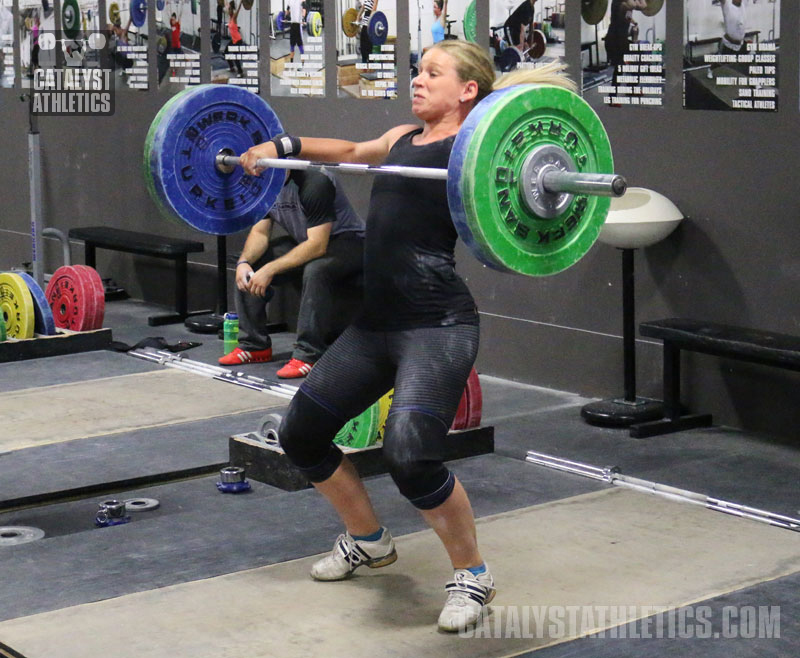 Erika Asks: I was debating all day if I should even attempt to ask a question, since I have this lack of self-confidence that comes with other people constantly needing to tell me something. I couldn't believe the article you just posted today, Advice: Sometimes It's Okay. But.... It is regarding exactly that. I Olympic lift at three different gyms. I train specifically for my Olympic lifts at one gym and I never heard this exact criticism. I go to two other gyms to supplement my lifts on my own and had the same criticism at both these spots from people who are not my coach. "Why do you jump in the snatch?" is what I was asked.

So my question is: Is that something that is a snatch faux paux? I know both individuals have a certification in Olympic Weightlifting, but it was the first time I ever heard anyone try to correct that issue in my snatch (among all the other issues I have acquired, with conflicting technique criticism.) I just never heard that you should keep your feet on the floor. My dream is to be a National level competitor and join a very credible Olympic lifting team, preferably yours!! I have been Olympic lifting for 4 months and snatch 44kg and clean and jerk 55kg as a comp high. I squat 175 for two reps and I feel like I could do so much more, but my lagging technique is holding me back. I don't want to keep going and having bad habits that are harder to correct. I don't know how far I can keep progressing and making PRs, if my technique is not the best. What would be the best advice at this point. Feet on the ground or not? As well as, should I just stay light and work on technique and speed or just keep mixing it up with heavy, light and just keep going forward. Thank you!

Greg Says: First of all, ask questions. That’s how you learn. Asking questions is a great way to figure out whom to listen to as well when you’re in a confusing situation like you are now—some of those people will have sound rationale for what they’re saying and it will be obvious, and others will very quickly demonstrate that they have no idea what they’re talking about. Immediate red flag if one of them gets defensive in response to a question or doesn’t want to explain it to you.

Now to the question. This is one I know I have answered before in a number of different ways, but it’s an important one, so I want to do it again. Like just about everything these days, weightlifting information and coaching is influenced by fashion to some degree. That is, someone reads, sees or hears something new, and people will get excited about it and suddenly it’s the most important thing in weightlifting, at least until it’s replaced by the next new thing. The idea of jumping or not jumping is one of those fashionable issues that’s particularly frustrating to me because the way I’ve seen the argument stated most of the time is wholly misleading and abounding with misunderstanding and nonsense.

What needs to be understood first and foremost is that jumping and picking up your feet are two different actions. Jumping is the action of elevating your center of mass to a position higher than where it is when you’re standing still—everything moves UP off the ground. Picking up your feet is actually the exact opposite action—it will cause your center of mass to FALL toward the ground. (Stand tall and pick up your feet and see what happens if you’re confused about this.) No matter how aggressively or high you lift your feet like this, your body will absolutely not move up even the slightest amount.

So if you’re receiving this criticism, you need to first determine whether or not you’re even actually jumping, or if you’re just lifting your feet significantly as you pull yourself under the bar, and these certified individuals are being confused by that space between your feet and the ground. Matt Foreman wrote an article about this that was accompanied by some great photos showing some of the best weightlifters in the world lifting their feet dramatically during their movement under the bar (easily 5-6 inches in some cases). Some people will look at those photos and claim the lifters are jumping—those people would be unequivocally wrong.

Now, there are a couple reasons why such aggressive extension of the hips and knees in the snatch or clean doesn’t produce what we would consider a jump according to our very accurate and helpful definition. The first reason should be pretty obvious—you’re holding onto something heavy (Granted, that something for new lifters is not necessarily very heavy, but bear with me for a moment and I’ll come back to that point). Hold onto a barbell that weighs as much or more than you do and try to jump as high as possible and I think you’ll discover you don’t get incredibly high.

Next, and more importantly, the reason you don’t accidentally float up into the stratosphere as a result of your amazing hip and knee extension ability is the fact that at the point of such hip and knee extension at which in a jump you would begin flying up off the earth, you are actively and aggressively pulling against the barbell, which has considerable inertia, in order to relocate your body under the barbell. In other words, as soon as you’ve finished generating the force against the ground that would lift you in a jump, you’re applying a new force in the opposite direction that moves your body down. (The action of picking up the feet we talked about earlier aids in this movement down by ensuring that there is precisely zero resistance from the body, which means the change of direction and downward movement can be faster.)

(The third reason is fairly minor, but I’ll mention it anyway—the extension of the body in the pull of the snatch and clean is oriented slightly backward rather than straight up as it would be in a vertical jump.)

All of this said, because your current lifts are light relative to your bodyweight (presumably you don’t weigh much less than 44 kg), it is possible for you to actually jump a bit when you snatch or clean if you’re aggressive in your pull, are not aggressive in your pull under, or your timing is off. How high the barbell moves and how low your body moves among lifts of equal effort will depend on how heavy the bar is relative to your body.

As an example, if you weigh 60 kg and snatch 20 kg as hard as you can, the bar will fly overhead and you will not really move down much at all—the weight is light so it will travel a lot with the force you’ve put into it, and the action of pulling against the bar will continue moving the bar up more than it moves you down because your body has much more inertia than the bar. If you increase that weight to 80 kg, the same effort to lift the bar will produce less elevation, and your same effort to pull down against the bar will move you much farther down because the bar has much more inertia than it did in the 20 kg lift—that is, your pulling against it with your arms will move you down much more than it continues to move the bar up.

All this being true, when you’re working with lighter weights, you do need to control the force of your extension to some degree if you want to practice the movement as similarly to what it will be like with heavier weights. This doesn’t mean you change the movement at all (i.e. you will still extend fully), it just means you will put less force into the effort. This is something you’ll need to do early on as you’re developing and with your lightest warm-up weights later down the road. Eventually, you will be putting absolute maximal force into every part of the lift at your heavier weights.

Of course, there is no rule that states you MUST pick up your feet during the pull under the bar. If you or another individual finds that you’re able to lift more effectively by keeping the feet close to the floor, that’s the best way. This is something that you’ll discover naturally the more you train. But I suggest learning and training with an actual lift and replacement of the feet on the platform initially.

Finally, choose one coach to trust and listen to as long as that individual is adequately qualified. You can always consider the advice of other people, but don’t let it distract you or compel you to question what you’re doing if what you’re doing is working. 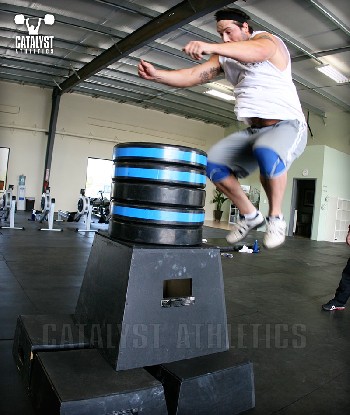 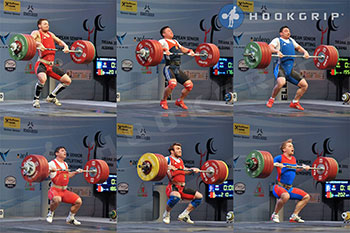 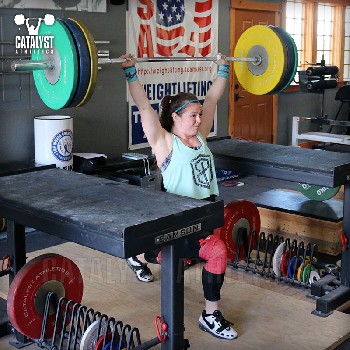 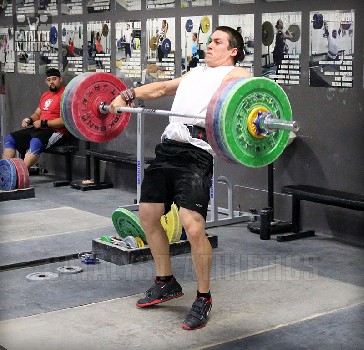 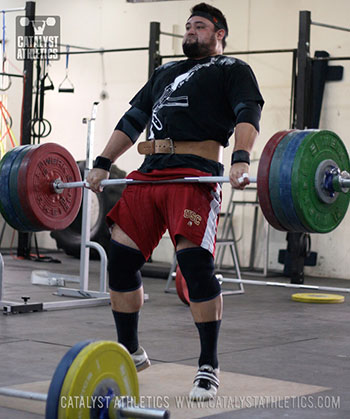