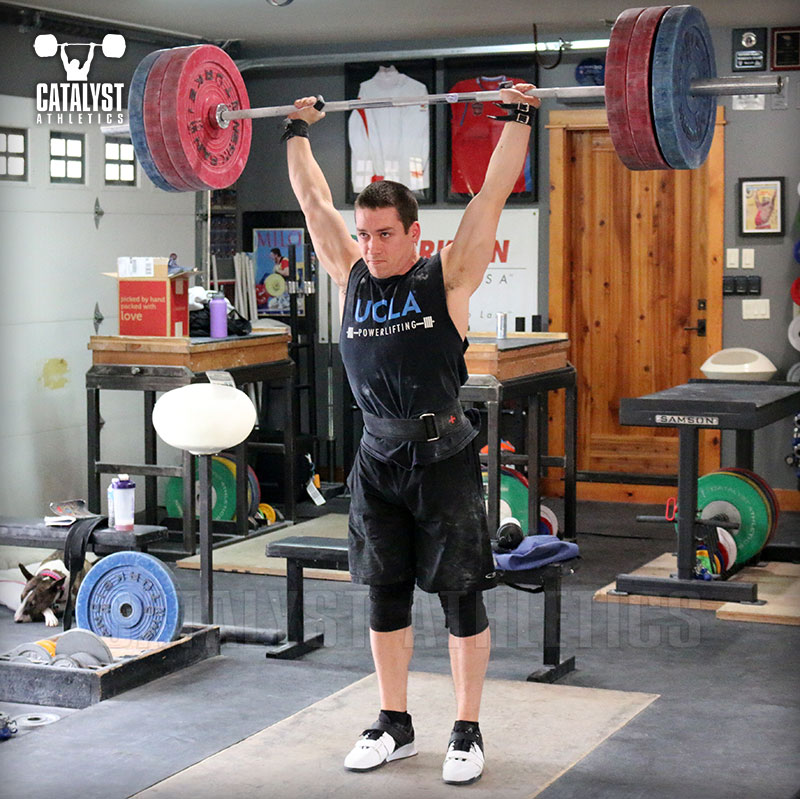 See more articles & videos like this in the Weightlifting Competition Preparation collection.
I went to the American Open Series One meet in Reno last week to coach my team of lifters, and let me tell you something… I heard a lot of comments in the warmup room that told me what other athletes and coaches were thinking. It wasn’t good, just so you know.

Here are the kinds of things I’m talking about.

“I just want to get one lift in today.”

“I’m just gonna make my opener, and then we’ll see what happens.”

Does anybody see what the problem is here? These lifters are basically approaching the competition thinking about making their opening attempt… and that’s it. They’re not coming right out and saying they’re planning to miss their other two attempts, but that’s the obvious direction it’s all going, based on the way they’re thinking.

I don’t get it. I absolutely don’t freaking get it. Why? I mean seriously, folks. Why in the hell would you spend months training your guts out in the gym, blow tons of money to travel to the big show, and only plan to make your openers?

You get six attempts in a weightlifting meet. 3 snatches and 3 clean and jerks. My trusty calculator shows me that if you make 2 out of 6 lifts, that’s a 33% success rate.

So if you lift in a meet and finish the day with a 33% success rate, you’re gonna be happy about that? You consider that a good day? You accomplished something?

I suppose you can look at it like that if you want to. I sure as hell don’t. In my way of thinking, going 2/6 is just slightly better than bombing out. In other words, it’s a marginal step up from complete failure.

I know what you’re thinking. Those comments I quoted above don’t tell me everything that’s going on in a lifter’s head. Correct? Just because I heard somebody say one of those things, it doesn’t necessarily mean they’re planning to miss lifts. Their comments don’t guarantee they’re thinking negatively. We have to give them the benefit of the doubt and be fair, acknowledging that a few words don’t tell us the whole story of an athlete’s mental game. Right?

Comments like the ones I heard at this meet tell you EVERYTHING about what’s going on in the lifter’s mind. These words are a direct indicator of what the athlete came into this meet planning to accomplish.

At every opportunity, the coach should use words and language with athletes that indicate an expectation of perfection. And if you’re the athlete, this is the same kind of self-talk you should have in your mind.

Little things mean a lot. Short comments and phrases can plant seeds in a lifter’s mind. The comment might seem insignificant, and the seed might be tiny, but it can grow into something huge. Especially if you continue to water the seed with additional comments that show the same low level of expectation.

Now… facts are facts. If you compete long enough at a high level, you’re eventually going to have some bad days. That’s the life of a lifter. We all know that. 2/6 performances? We’ll all have to swallow those at some point if we push the limits as hard as we’re supposed to.

The key is to make sure you don’t start acknowledging 2/6 performances as acceptable or successful. Once you do that, you’re basically opening the door for more of them down the road. And you’re running the risk of turning into a 2/6 lifter, somebody who usually makes openers at a meet and then misses everything else. Those patterns can develop without you even knowing it. Like many things, they start small and gradually grow into something huge.

Obviously it’s possible to walk away from a competition with a successful end result on a 2/6 day. If you go 2/6 and only make your openers, but your weights were higher than anybody else, you win. You finish with a gold medal. Is a gold medal a successful result? Of course it is. I won the University Nationals on a 2/6 day once.

But we’re not talking about winning. We’re talking about performing well. You might be able to dominate some competitions with 2/6 days if your lifts are just a hundred miles ahead of your opponents. But trust me, if you continue to move up to higher levels as a weightlifter, you’re eventually going to run into competition that you can’t beat with 2/6 lifting. Watch the World Championships. Watch the Olympics. Most of the athletes who compete successfully at that level have something in common. They don’t miss a ton of lifts.

At the highest level, everybody is good. Everybody has big lifts. The championships are often decided by who makes the most attempts. The one who doesn’t flinch is the one who pockets the gold.

There are occasional exceptions, sure. One-in-a-million lifters like Naim Suleymanoglu can win World Championships on their opening attempts because they’re so much better than everybody in the world. It’s rare, but it happens. (But Naim was still a very accurate lifter who didn’t miss many competition attempts, despite the fact that he was so far ahead of everybody)

The point we’re trying to make here is this… great lifters have great expectations. They think about being perfect, all the time. They don’t go into meets with an intimidated mindset where they’re thanking their lucky stars simply to survive the competition and finish with a total. They think about kicking some ass and nailing every weight they put their hands on, all day.

Make yourself one of those lifters. If you want to get to the top, it all starts in your brain. There’s an old quote that says, “Your mind is a garden. It will grow whatever you plant in it.” If you plant doubts, fears, and low expectations, you’re usually not going to finish with perfect results. So don’t shackle yourself with crap like that. Free your mind, and your ass will follow.


See more articles & videos like this in the Weightlifting Competition Preparation collection.

Mario Quezada
Thanks for this.
Meredith
Once after a meet I found myself sinking into the "at-least-I-made-a-total" black hole thinking. I was looking on the bright side of a very bad day. But immediately after consoling myself for lifting like a chimpanzee, I identified the stupid stuff that I had done to weaken my performance, and started planning what I would do to improve on my next cycle. Thanks for your words of wisdom.
Max
This was a perfect time article! I coach a few athletes who have power lifting meets coming up and they were getting extremely nervous about it, and even though its a different sport they have gotten into the "just make my opener" mindset that you describe in this article. I printed it out and forced all of them to read it. Thank you so much for this article.